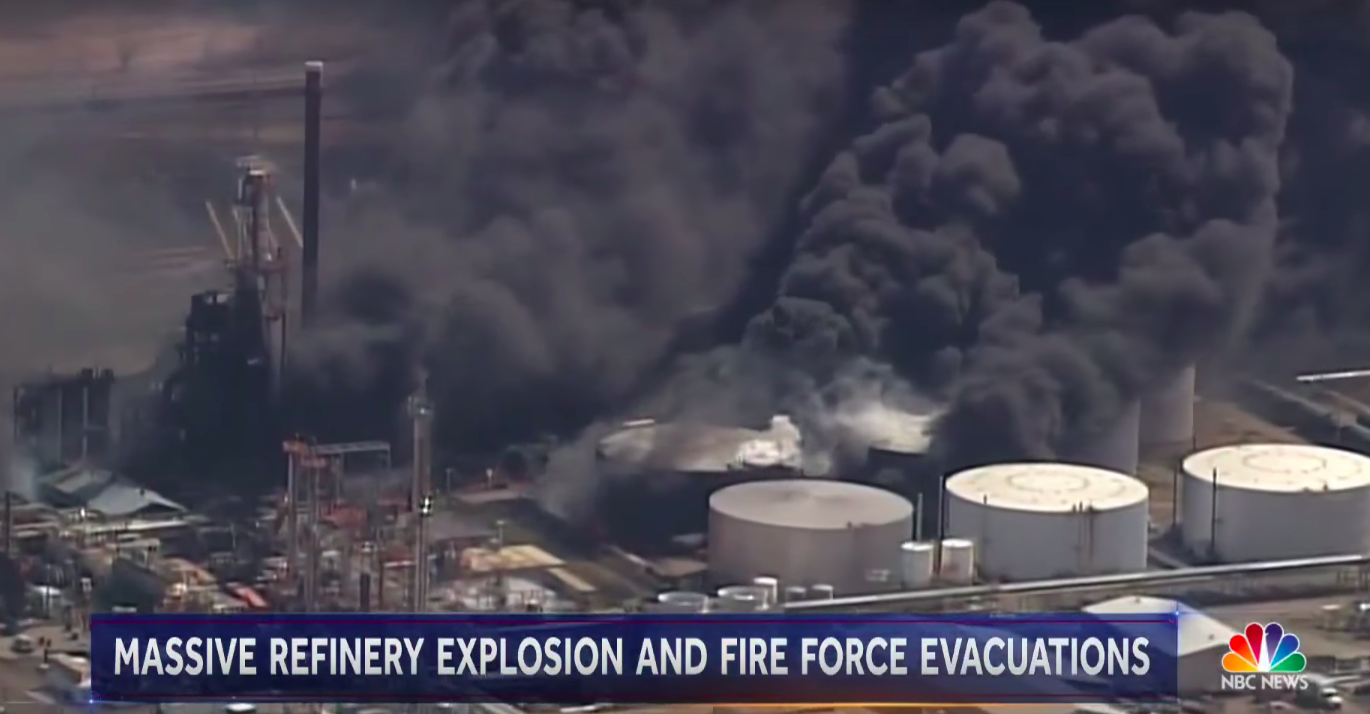 About 27,000 residents had to evacuate their homes yesterday after an explosion at an oil refinery In Superior, Wisconsin, released black clouds of noxious smoke. Fifteen people suffered 'blast-related injuries', according to Reuters, leaving 11 hospitalized.

Watching this from Burnaby, B.C., some yesterday were asking: "What if it were to happen here?"

Longtime Burnaby resident Elsie Dean was one of them. Dean has lived in the area since 1970 and told National Observer she was disturbed by images from the Wisconsin refinery explosion and wondered what would happen if a similar disaster were to occur in her community.

"It's horrendous," Dean said. "Maybe some notion of this danger to the people and the environment will arouse some discussion about bringing all this dilbit (diluted bitumen) into Burnaby.”

In 2015, the Burnaby Fire Department released a report warning that the expansion of the tank farm would increase the likelihood that a fire would be able to spread from tank to tank and, ultimately, torch the surrounding forest on Burnaby Mountain.

Burnaby Deputy Fire Chief Chris Bowcock agreed that any active “hydrocarbon facility has the risk of the discharge of both flammable and toxic outfalls.”

While he stressed that Burnaby Fire Department's priority has always been to protect the community first, he said that handling an evacuation of the same scale as Wisconsin's would be very difficult.

Lynn Quarmby works in Burnaby, B.C. near to where Kinder Morgan's Trans Mountain expansion pipeline is slated to expand oil storage units capacity say the dangers of the nearby oil facility worry them, too.

“Something just like that and much worse could happen at the tank farm in Burnaby,” the biochemistry professor at Simon Fraser University told National Observer. “Especially if they do the (tank farm) expansion.”

“It’s a tragedy...This is a whole community that’s having to deal with the impacts of something going wrong at a refinery,” said Andrea Harden-Donahue in response to the Wisconsin refinery explosion.

Quarmby has long opposed the Texas energy giant's proposed project, which is projected to triple the capacity of the Trans Mountain pipeline, allowing it to carry up to 890,000 barrels of petroleum products per day.

But the project has strong support from the federal government and from the Province of Alberta whose leaders promise it will bring millions in tax revenue to provinces and create much-needed jobs in the oil industry. The project has faced numerous challenges this month, ranging from Kinder Morgan's threat to cancel the the project to a bombshell claim from government insiders that its approval was rigged.

Quarmby worries that if a fire or explosion were to break out at the tank farm, she and her students would be unable to escape.

“If the expansion goes through, I’m going to have to seriously consider how I’m going to arrange my life,” warns Quarmby. “Because it doesn’t feel responsible for me to teach classes up there and to draw students to that place where we could not evacuate.”

Romilly Cavanaugh, a former environmental engineer who once worked on the Kinder Morgan Trans Mountain pipeline, said a tank farm disaster would be dangerous for neighbours. She said when the Kinder Morgan tank farm was first constructed in Burnaby, the area was not heavily populated, as it is today. But as property values went up in Vancouver, the area around the tank farm became increasingly populated.

“Now there's housing that’s very close, and there’s also the SFU campus… so there’s the risk to people of fire as well as the risk of toxic fumes from the black dust,” she said. Cavanaugh added that the 'black dust' and fumes from an oil storage tank fire would be toxic to people and wildlife.

Burnaby South MP Kennedy Stewart was arrested along with Federal Green Party leader Elizabeth May early this month while protesting the pipeline expansion. His concerns about the expansion are many and safety is at the forefront of them. “The Burnaby fire department has said they have no way to deal with it in the case of a catastrophic fire," he said. "And nobody has had an answer for why this is allowed to be even considered when we know these disasters do happen.”

For Andrea Harden-Donahue with the Council of Canadians, watching the news of the Husky Energy refinery explosion in Wisconsin was simply tragic.

“These are people’s lives. This is a whole community that’s having to deal with the impacts of something going wrong at a refinery," Harden-Donahue said.

Grand Chief Stewart Phillip of the Union of B.C. Indian Chiefs couldn't agree more. “The Wisconsin oil refinery explosion is further undeniable evidence that the processing and conveyance of heavy oil is dangerous and fraught with inherent risks," he said.

Kinder Morgan did not respond to National Observer's request for a comment in time for publication of this article.

Meanwhile, in the town of Superior, people are returning to their homes.

The new KM tanks in Burnaby

The new KM tanks in Burnaby will be 300m from an elementary school. Their emergency plan is to 'shelter in place'.