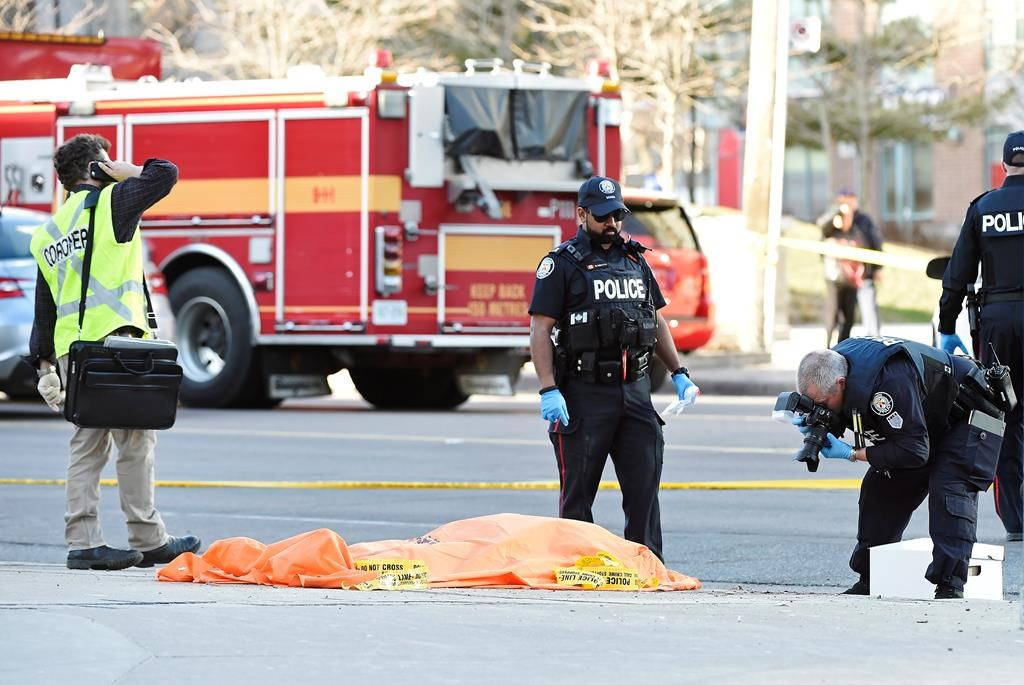 Police take photos around a covered body in Toronto after a van mounted a sidewalk crashing into a number of pedestrians on Monday, April 23, 2018. File photo by The Canadian Press/Nathan Denette
Previous story

After four days of painstaking "scientific" efforts to identify the victims of a horrific attack in Toronto, authorities released on Friday the names of eight women and two men who died when a van mounted a sidewalk, mowing down pedestrians in its path.

The dead ranged in age from 22 to 94 and included a student from South Korea and a man from Jordan, authorities said, as they noted additional charges would be laid against the man arrested in Monday's incident.

Police have alleged 25-year-old Alek Minassian rented a van and drove to Toronto's Yonge and Finch area, where he began cutting a swath of destruction along one of the city's busiest roads as well as nearby sidestreets.

Ontario's chief coroner said his team members took time confirming the identities of the deceased because they wanted to ensure there was no confusion that would add to the pain being experienced by victims' loved ones.

"Everybody has suffered a terrible tragedy, a totally unexpected, unspeakable tragedy that is unimaginable to everybody," Dr. Dirk Huyer said at a news conference.

"We undertook scientific efforts to confirm and ensure all the proper identifications ... We needed to do the additional work to ensure there was no confusion or any potential additional grief."

Insp. Bryan Bott said the number of people injured in the attack has also grown to 16 after police identified two people who came forward since the beginning of the investigation.

Minassian, from Richmond Hill, Ont., is already charged with 10 counts of first-degree murder and 13 counts of attempted murder, and will face three additional attempted murder charges in the coming days, Bott said.

At least 12 injured people remain in hospital, he added, but did not provide updates on their condition.

Bott declined to say whether any specific population was targeted in the attack despite the fact that the majority of the people killed were women.

A Facebook post from Minassian's account references an American mass killer who cited his hatred of women as his motive. Bott did not confirm whether Minassian was the author of the post and said his online activities will form a part of the ongoing investigation.

Bott said the RCMP is involved in the probe, which requires police to interview close to 300 total witnesses and sort through dozens of photos submitted by the public.

"Certainly the evidence we have in this investigation does not meet the threshold for ... terrorism, but we are sharing our information back and forth," he said.

The victims' names and backstories had begun to trickle out via family members, friends and employers before coroners completed the official identifications.

The details that emerged painted portraits of people from all walks of life, with victims celebrated for everything from their cooking skills to their love of animals and devotion to their young children.

Kang, a chef at a downtown steakhouse, was praised by coworkers for his warmth and energy.

A monk at the Buddhist temple where Amarasingha regularly took her seven-year-old son recalled how she baked cookies every week to bring to Sunday school students.

Tennis Canada hailed D'Amico's hours of volunteer service with the organization, saying her friendly nature eventually saw her working directly with the elite athletes who participate in its marquis Rogers Cup.

Sewell's grandson said the passionate local sports buff was the best grandmother anyone could have, while Forsyth's neighbour lamented the now-lost tradition of walks in the park on which her friend would feed the nearby birds and squirrels.

Seneca College and the University of Toronto both issued statements saying one of their students had died in the attack, but did not provide their names.

Bradden, whose name was first released on Friday, worked as an account executive at the Toronto offices of Gartner, an international research and advisory company with offices near the crime scene. A spokesman for Gartner said the company would not issue a statement at the family's request.

According to local newspaper the Caledon Enterprise, however, a condolence blog post briefly shared to the company's website prompted glowing tributes from her colleagues.

"Andrea's joyful energy brought smiles, happiness and laughter to everyone who was privileged to work with her and call her a friend," area vice-president Alex Falkingham reportedly wrote in the post. "She had an uncanny ability to make any room she walked into a more positive place, with laughter filling the room."

Brady — a grandmother who was known as Gerry to her family and friends — sold Avon products for more than 45 years and was still going out to visit customers up until her death, her friend and fellow Avon salesperson Feanny Xu said.

They met about 14 years ago at a conference and later started working as a team, Xu said, adding she believed Brady was visiting customers in the area when she was killed.

"She was very honest and caring for others," Xu said. "She is wonderful. It's so sad."

Xu heard from Brady's son-in-law on Tuesday that the family believed she had died in the van attack. But Xu said she was still devastated when it was confirmed on Friday.

In the days since Monday's violence, members of the public have flocked to the scene of the attack to leave flowers, candles and multilingual messages of support. A vigil for the victims was scheduled to take place on Sunday night.

The city of Toronto has also established a fund-raising effort, dubbed Toronto Strong, that had raised more than $1.5 million by Friday afternoon.