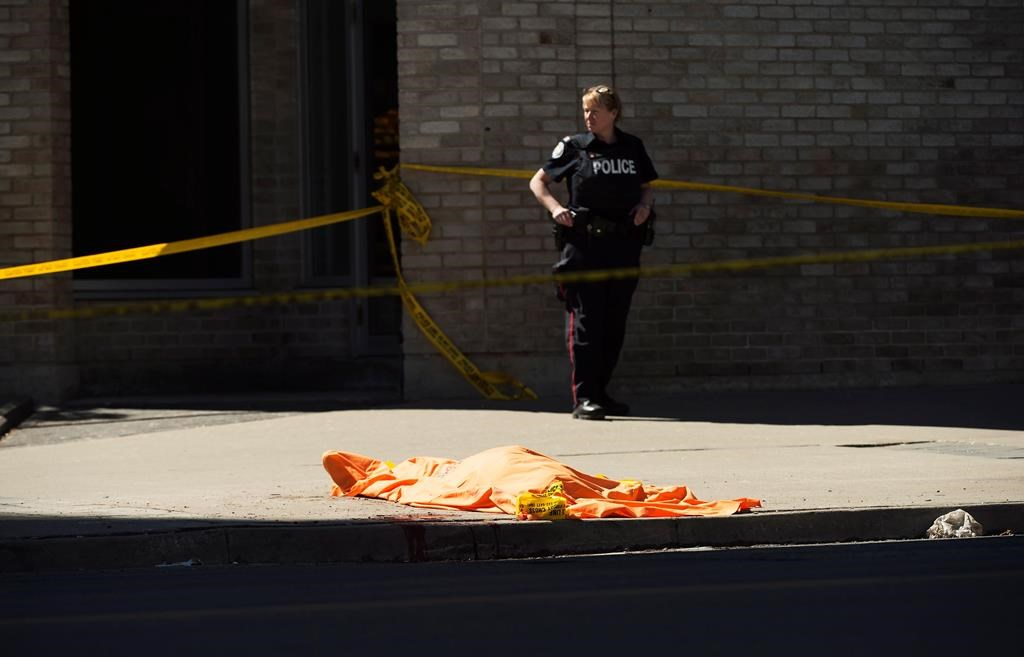 Toronto police say 10 people are dead and 15 are injured after a van mounted a sidewalk in north Toronto on April 23, 2018, hitting pedestrians. Photo by The Canadian Press
Previous story
Next story

Ten people died and 15 others were injured when a van mounted a sidewalk and struck multiple pedestrians along a stretch of one of Toronto's busiest streets, authorities said Monday, calling it "a horrific attack."

Deputy police chief Peter Yuen said the driver of the van was taken into custody, but did not provide details as to his identity or any charges he may be facing.

"I can assure the public all our available resources have been brought in to address this tragic situation and to investigate," Yuen told reporters near the scene.

Yuen said calls began pouring into police at 1:30 p.m. reporting a driver careening down a stretch of Yonge Street between Finch Avenue and Sheppard Avenue in the city's north end, which is home to many businesses.

Toronto Mayor John Tory offered condolences to the families and the victims of the incident, saying the city was setting up a hotline to offer support to those affected and another one for witnesses who could help with the police investigation.

Tory called for "a spirit of unity" as many residents are likely struggling to come to terms with what happened.

"This is a time when this community should come together," he said. "These are not the kinds of things that we expect to happen in this city. We hope they don't happen anywhere in the world, but we especially don't expect them to happen in Toronto."

Toronto Paramedic Services said the injured were transported to various hospitals throughout the city, including Sunnybrook Health Sciences Centre, which reported that two of the 10 patients transported to their emergency rooms were pronounced dead on arrival. The hospital said five patients remain in critical condition and three are in serious condition.

While police did not comment on any possible motive for the incident, Canada's public safety minister said there is no indication that the national terrorism threat level should be raised.

"There is no information available to me at the present time that would indicate a change in the risk level," said Ralph Goodale, who was in Toronto attending a meeting of the G7 foreign ministers and other security officials when the incident happened.

"Grateful for the brave and professional response of @TorontoPolice and other first responders to the horrific attack at Yonge and Finch," he tweeted moments later. "Canadians are appalled at what happened. The victims and their families have our deepest condolences."

Eyewitnesses to the incident described a scene of devastation.

Phil Zullo was driving north on Yonge Street early Monday afternoon when he said he observed police chasing a vehicle.

Moments later he said he realized why.

"I must have seen about five, six people being resuscitated by bystanders and by ambulance drivers," Zullo said. "It was awful. Brutal. Just people everywhere. People — shoes and shirts and ball caps on the floor, and some of the bodies were completely covered by blankets."

Photos from the scene showed paramedics treating several people on a blood-stained sidewalk.

Dainis Cevers said he was driving to pick up a relative at a nearby church when the alleged perpetrator cut in front of him, hit a pedestrian and accelerate.

"The guy flew up all the way to the end of that sidewalk...about five or six metres," Cevers said.

Restaurant manager Noorani Barsat said he raced outside after hearing a commotion to find a badly injured man lying nearby.

"I just ran over there, brought water and a towel to that injured man, but he was unconscious," Barsat said, adding first responders took about 20 minutes to reach the scene.

Tareq Amir was on his way to the bank when he came upon the aftermath of the crash, which he said destroyed a bus shelter and left at least three people injured within his view.

"Nobody knows what's going on here," he said. "But I'm really sorry for the people that get injured."

Dozens of people stood in silence close to the crash scene as a police helicopter hovered overhead. Streets in the area were closed as dozens of police cruisers converged on the area. Police said a section of the street where the incident happened will remain closed for several days as officers conduct what they expect to be a long and complex investigation.

The head of the Toronto Police Association said they are bringing in counsellors for officers who responded to the incident.

"Nobody's seen anything like this. I've been in policing for 30 years we've never seen this and again, unfortunately, this is the new world order and we're very concerned about it," Mike McCormack said.

Ontario Premier Kathleen Wynne said all levels of government and law enforcement are working together on what she called a "frightening and tragic situation."

"I think we are all unsettled and very disturbed by a situation like this. I think it's impossible not to be," she said. "It's frightening and we have to rely on the people who are trained, who can make sure that information is available as it needs to be and that the precautionary measures are taken here in the city and around the province."

"Our hearts go out to everyone affected," Trudeau said in Ottawa. "We are going to have more to learn and more to say in the coming hours."

The incident was a top story on numerous international news networks and websites, with scenes from Canada being broadcast live.

It quickly became fodder for domestic political discussions south of the border.

Sen. Ted Cruz used the Toronto event to urge his colleagues in the Senate to approve the nomination of a new secretary of state, which is being resisted by Democrats.

''As we look at this attack in Toronto, we obviously don't know the details yet, but it underscores what a dangerous world we're in,'' the Texas senator told Fox News.

''This is a perilous time across the world. We need a strong, steady hand as secretary of state.''

Toronto police Chief Mark Saunders, who was in New York when the incident happened, was expected to arrive in Toronto later on Monday to provide an update on the investigation.

— With files from Nicole Thompson, Maija Kapler and Tara Deschamps