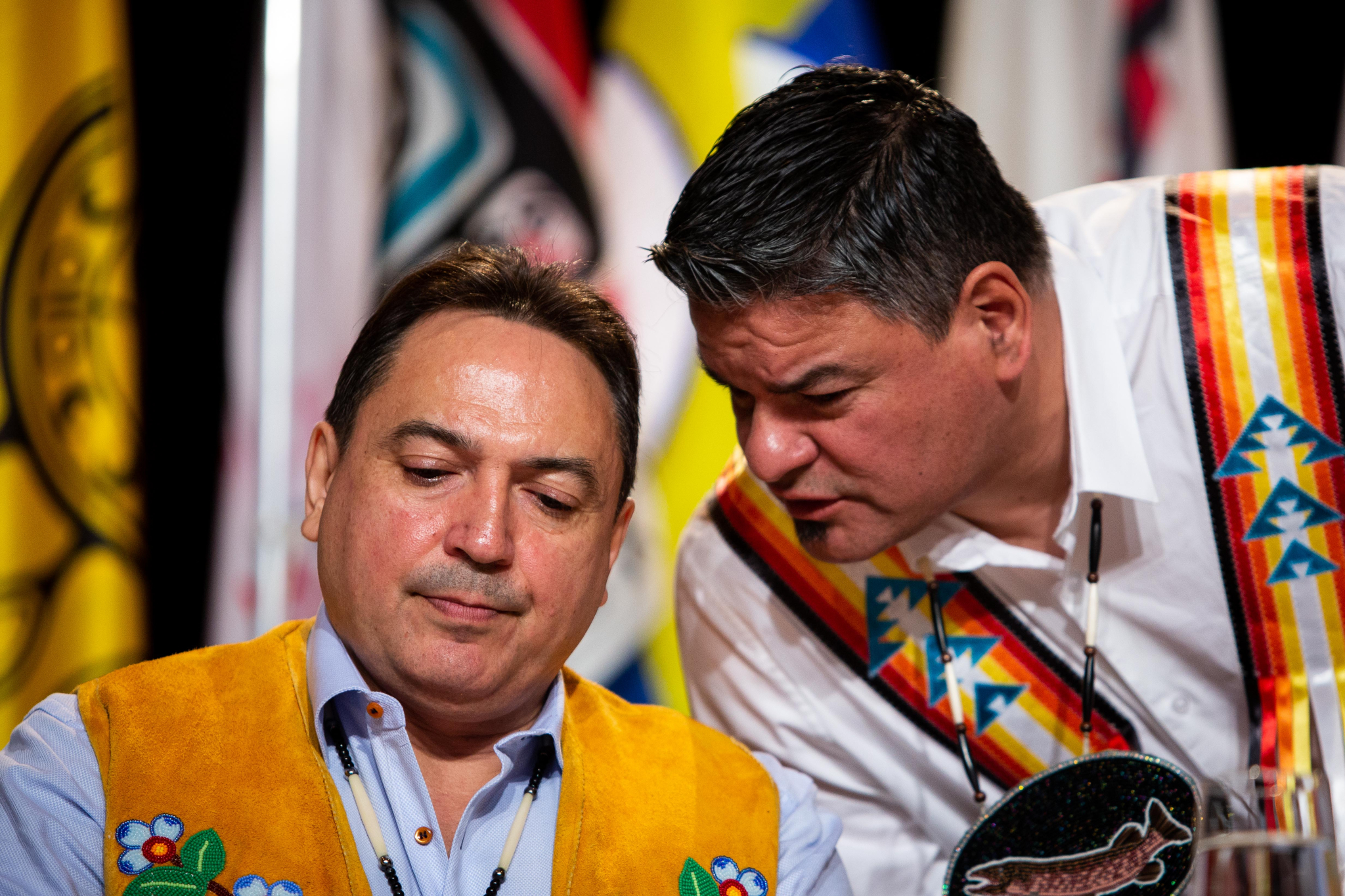 The organization representing First Nations in Ontario has joined a nationwide treaty alliance calling for a ban on the Trans Mountain pipeline expansion and other fossil fuel projects.

The Chiefs of Ontario, which represents 133 First Nations across the province, lent its support to the Treaty Alliance Against Tar Sands Expansion, in a May 2 letter of support signed by Ontario Regional Chief Isadore Day.

“The Chiefs of Ontario agree to the immediacy of building a more sustainable future so our children do not have to rely or be exposed to fossil fuels which pollute and destroy the earth, air, and waters,” Day wrote in the letter, obtained by National Observer.

The oilsands, deposits of a tar-like heavy oil mixed with clay beneath the boreal forest in Alberta and Saskatchewan, represent the third largest reserve of crude oil in the world after Saudi Arabia and Venezuela. But oilsands extraction is costly and energy-intensive, and oil producers in the region have struggled to compete in international markets.

The industry has said that new pipelines such as the Trans Mountain expansion would help support jobs and growth, opening up access to markets such as Asia. The federal and Alberta governments have said that the pipeline would be part of a transition plan needed to allow Canada to meet its climate change goals.

But opponents, including the alliance, say that Canada will never be able to meet its climate change goals unless it stops expansion of the oilsands industry.

The Treaty Alliance is calling for a ban on pipeline projects including Kinder Morgan’s Trans Mountain, TransCanada’s Keystone XL and Enbridge’s Line 3.

“The allied signatory Indigenous Nations aim to prevent a pipeline, train (or) tanker spill from poisoning their water and to stop the Tar Sands from increasing its output and becoming an even bigger obstacle to solving the climate crisis," reads the letter.

Ghislain Picard, regional chief from Quebec, said he pursued the support from the Ontario Chiefs. He said he asked them for their support at a May 1 meeting at the Assembly of First Nations’ Special Chiefs Assembly in Gatineau, Quebec.

"What's really at play here is we have a government that's deciding for itself when we come into play — and that's not right, that's what we need to denounce,” said Picard, at a Treaty Alliance press conference on the sidelines of the assembly on May 2.

At the press conference, members of the treaty alliance joined calls for an independent inquiry into revelations from government whistleblowers uncovered by a National Observer investigation that the Kinder Morgan approval process was “rigged.”

Government insiders have said a high-ranking public servant instructed them to give cabinet a “legally-sound basis to say ‘yes’” to Trans Mountain.

"It appears that the Trudeau government entered into this process with an end goal in mind,” said Squamish Nation councillor Khelsilem, at the press conference.

"We need to know — we deserve to know — what was the process behind closed doors that the Trudeau government used? Was this process cooked from the beginning? Was it rigged?"

Pipeline approval made ‘in Cabinet, by Cabinet’

The Trans Mountain expansion would triple the current volume of fuel shipped on the existing system, to up to 890,000 barrels of heavy oil a day. This would increase oil tanker traffic off the coast of Burnaby, in Metro Vancouver, in the unceded territory of the Tsleil-Waututh and other nations.

Natural Resources Minister Jim Carr has said he intends to keep his promise to Maureen Thomas, chief of the Tsleil-Waututh Nation, to protect her nation's territory.

Reacting Wednesday to the news of the Ontario Chiefs support for the Treaty Alliance against Trans Mountain, Carr's spokesman said the Trudeau government was committed to advancing reconciliation.

"The decision to approve the (Trans Mountain expansion) project was made in Cabinet, by Cabinet, and only after extensive and unprecedented consultations with Indigenous people, a key pillar of our interim approach," said spokesman Alexandre Deslongchamps in an email.

He noted that a ministerial panel heard from hundreds of Canadians at dozens of public meetings and received thousands of responses, "the most exhaustive review of any pipeline in Canadian history." Many Indigenous communities continue to be involved through an Indigenous Advisory and Monitoring Committee, he added.

"Through our review of the Trans Mountain Expansion, we added additional time and steps to the review process to make it more rigorous. We extended consultation to ensure we were meeting and exceeding our duty to consult Indigenous peoples," he said.

Picard and Khelsilem were joined at the Treaty Alliance press conference by Grand Chief Sheila North of Manitoba Keewatinowi Okimakanak, Chief Judy Wilson of Neskonlith Indian Band, Chief Bob Chamberlin of Kwikwasut'inuxw Haxwa'mis First Nation, and other leaders in opposing the pipelines and calling for an inquiry into whistleblower revelations.

Khelsilem said the prime minister made numerous promises to support Indigenous rights, but since then the government has “acted dishonourably.” He said an oil spill in his territory would devastate the local economy.

“Prime Minister Justin Trudeau has failed to respect the Indigenous rights of the Squamish people,” he said. "We were not consulted. Our rights are not being respected.”

North, who wants to become the next leader of the AFN and whose organization represents 30 First Nations, said she stood proudly with all the chiefs and wanted to acknowledge their work.

“I do believe that the people that live off the land and come from the land should have a veto on rights to the resources where they come from,” said North.

Wilson’s band is part of the Shuswap Nation Tribal Council. Another member of the council, Simpcw First Nation, recently reiterated its support for the Trans Mountain expansion. But Wilson said Kinder Morgan “have not had the consent of our proper title and rights.”

The proper title holders, she said, are “the people.” She said she joined in the blockade of Kinder Morgan's Burnaby, B.C. terminal on April 7. Hundreds of people, including federal Green Party leader Elizabeth May and NDP MP Kennedy Stewart, have been arrested protesting the pipeline.

Asked how far she would go herself to stop the pipeline, Wilson talked about protesters getting arrested and imprisoned. "Are they going to put everybody in jail?” she wondered. “If they put us in jail, there will be many, many others coming behind us.”

Others also noted that opposition to Trans Mountain won’t be the last that Canadians see of Indigenous opposition to projects, if they determine that the government hadn’t acted honourably or in good faith.

"It is going to be repeated on another scale, on another project, until the government fulfills its obligations,” said Chamberlin.

"I think we're seeing the beginning of what will become the largest civil disobedience in Canadian history,” Khelsilem agreed.

‘We have advanced a new chapter together’

The special meeting of chiefs was organized to address federal legislation related to Indigenous issues, including new legislation to help protect and promote Indigenous languages.

In a speech to the assembly on May 2, Trudeau argued his government has made progress on reconciliation, and urged those gathered that he has tried to focus on reforms that will survive over the long term, whether or not he continues to be prime minister.

"We have advanced a new chapter together," one in which Indigenous and non-Indigenous people are building a better Canada, said the prime minister.

He mentioned the government’s policies to eliminate boil-water advisories, provide people “a good education close to their family” and provide “clean, safe and reliable energy” to communities, as well as investments in child welfare.

"These much-needed investments attest to the strength of our commitment" to a new partnership based on recognition of rights, he said.

Trudeau announced in February he was launching nationwide consultations on new legislation to recognize Indigenous rights, that would "breathe new life" into Section 35 of Canada's Constitution, which enshrines the rights and title of Aboriginal peoples. His government also split the former Indigenous affairs department in two, a step it said took it closer to ending the "colonial, paternalistic" Indian Act.

"As your communities and nations develop your paths, we will be there alongside you," Trudeau said to the assembly about these new consultations.

But when it came time to questions from the floor, there was an urgency about the next federal election that Trudeau himself ended up acknowledging.

Asked if he could promise the Indigenous languages bill would become law before the next election, Trudeau made a quip about “faith” in his re-election chances — drawing a laugh from the audience — before noting the "fundamental importance" of the bill.

"I’m very pleased that this process around defence and strengthening of Indigenous languages is moving forward, but as you know it’s very much being co-developed,” he said. He wasn’t going to put a time limit on that process, he added.

The next questioner said "we're seeing and hearing all the right words" from the federal government, but “everyone is looking for a real commitment.” Trudeau responded that he understood the “underlying impatience.”

"The best way to demonstrate that this is the path forward — independent of whichever political party forms government in a year and a half and continue to govern this country -- (is) demonstrating the success that we have already achieved,” he said.

"This is itself a guarantee that no one is going to be able to back up on this path forward we're taking," said Trudeau. "That's what is reassuring to me, not my own viewing of my re-election chances."

Editor's note: This story was updated at 6:05 p.m. on May 2, 2018 to include additional quotes from First Nations leaders, Trudeau and Carr.