By Robert Cribb, Carolyn Jarvis & Andrew Bailey | News, Energy, Politics | May 2nd 2018
#23 of 42 articles from the Special Report: The Price of Oil 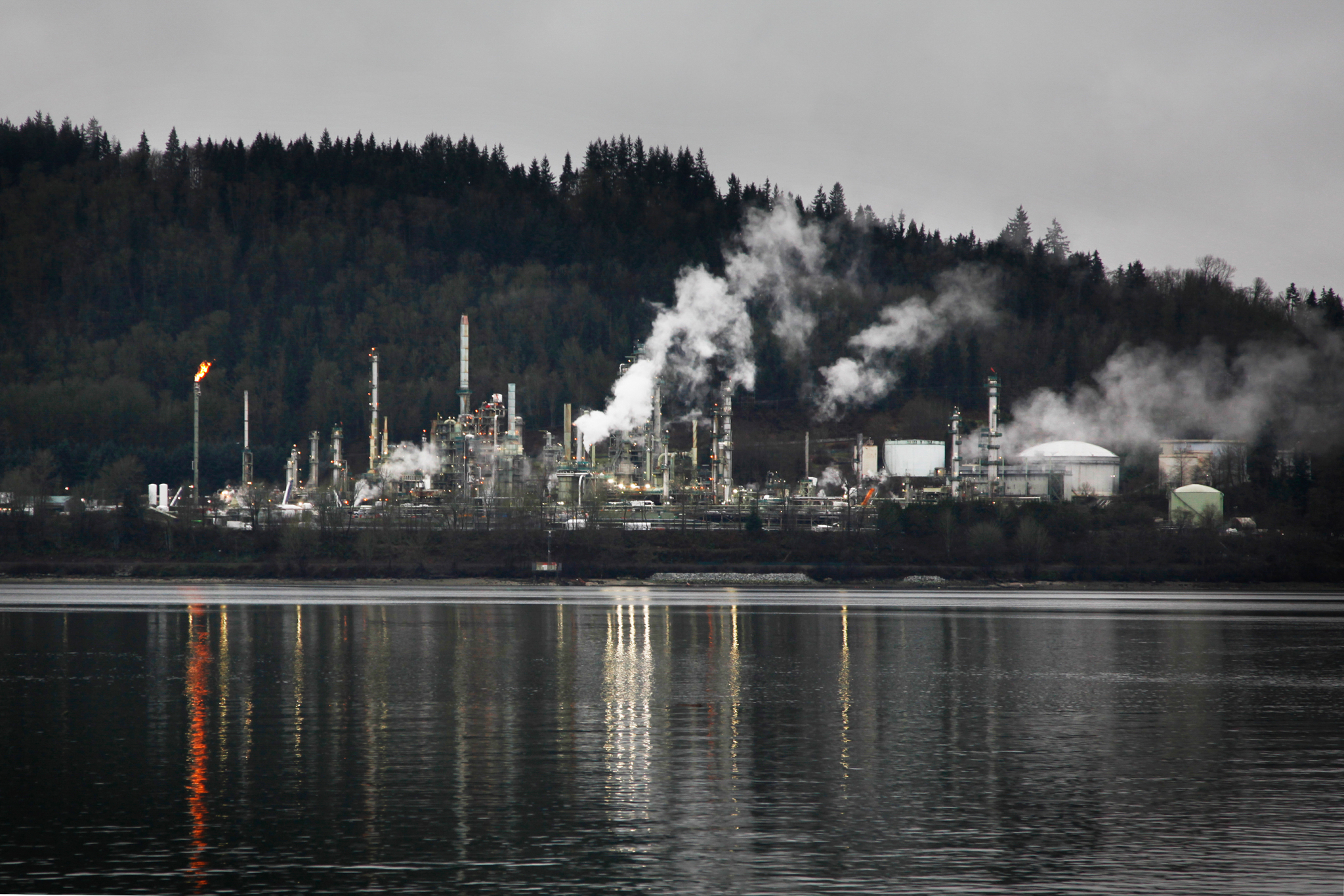 In 2014, the Parkland Burnaby Refinery (pictured here on Feb. 7, 2018) spewed out nine times as much sulphur dioxide as the ConocoPhillips plant an hour's drive away in Washington State. Photo by Jennifer Osborne
Previous story
Next story

The Imperial Oil Refinery in Sarnia, Ont., and the Marathon Petroleum refinery in Detroit. MI., have much in common: geography, climate and production levels.

What separates them is a 90-minute drive, a national border and starkly different emission levels for some key pollutants.

Those findings, based on 2014 data from the Canadian and U.S. governments, analyzed and published for the first time in a Toronto Star/Global News/National Observer investigation, are part of a national trend showing Canadian refineries pump out far higher levels of some key pollutants compared against their U.S. counterparts.

Carolyn Jarvis from Global News reports the findings of a joint investigation, in collaboration with the Toronto Star and National Observer, into pollution spewed from Canada's refineries. Global News video

In 2001, federal, provincial and industry officials agreed to move Canadian refinery emissions in line with U.S. benchmarks — a goal that remains far from complete 17 years later.

“It's almost mind boggling when you look at these numbers,” said Elaine MacDonald, an environmental engineer with the non-profit EcoJustice. “It would be quite an embarrassment to Canada for this data to be made public because it does show how far behind we are compared to the U.S.”

The key culprit behind the Canada/U.S. emissions gap, say experts, is less rigorous industry regulation and enforcement in Canada.

While federal oversight in the U.S. imposes a strict regulatory regime that includes stiff penalties for oil companies, Canadian refineries are managed under a patchwork of provincial and municipal air regulations. There remains no federal ‘cap’ for key pollutants — the result of years of “impasse” between oil companies, non-governmental organizations and government on how to address the emissions imbalance with the U.S.

Responding to the findings of this investigation, the Liberal government acknowledged the need for tougher air pollution emission measures in Canada, saying it is taking steps now to address it.

Canada’s oil industry is also well aware of the divide between its emissions and those of its southern neighbours, said Environment Canada spokesperson Mark Johnson in written responses to questions.

“Industry...have acknowledged the need to address the gap and have expressed a willingness to work together to ensure that measures that are developed are appropriate to address the risks to Canadians,” he said.

Industry officials did not challenge the investigation’s data analysis, saying emissions in Canada have fallen between 40 to 50 per cent since 2002.

Peter Boag, president and CEO of the Canadian Fuels Association, which represents the country’s refining industry, said all of his members are “in full compliance with their annual emission caps established by the relevant regulatory authority.”

“U.S. refineries have certainly reduced their emissions at a pace … greater than what's happened in Canada,” said Boag.

Imperial Oil officials did not agree to an interview for this story. But a written statement from the company says it operates “in compliance with government emissions regulations” and that they “strive for continuous improvement.”

Sulphur dioxide emissions at the Sarnia refinery have dropped 60 per cent in the past 15 years, benzene emissions have fallen 88 per cent in 25 years and fine particulate matter has been cut by a quarter over the past decade, the statement reads.

“It is important to note the challenge with comparing refinery emissions on the basis of facility size, as sites may have vastly different processing schemes, run vastly different crudes, and produce vastly different types of products to meet regional demand for refined petroleum products,” it reads.

Canada’s emissions on some of those toxins are in line with the U.S. averages.

Only three of the 15 Canadian refineries have significantly higher benzene levels relative to the U.S. average. And only one Canadian is well above the U.S. average for a group of chemicals called volatile organics compounds VOCs.

Regina’s Co-Op Refinery Complex emitted more than seven times the U.S. average for VOCs in 2014 and eight times the average for benzene — a chemical known to cause cancer —according to the data.

“Our refinery, like all Canadian refineries, are all in compliance with the regulations set out for our industry,” wrote Brad DeLorey, a spokesperson for the Refinery Complex, in a statement.

The same year, the Parkland Burnaby Refinery in B.C. (then owned by Chevron) gushed nine times as much sulphur dioxide as the ConocoPhillips plant an hour’s drive away in Washington state — even though it processed only 53 per cent as much oil.

“Our current operations meet SO2 emission standards and we continue to improve our performance under the direction of our air regulator, Metro Vancouver,” wrote Parkland spokesperson Leroy McKinnon in a written statement. “Metro Vancouver applies SO2 regulations that are more stringent than federal and provincial requirements.”

Sarah Henderson, a senior scientist with the B.C. Centre for Disease Control, says high SO2 levels in the air can have health implications.

“Anybody with any sort of constrictive lung disease, such as asthma or COPD (chronic obstructive pulmonary disease), is going to respond to that SO2 and it might cause an exacerbation of their disease.”

Jason Simon, a retired NHL hockey player from the small First Nation of Aamjiwnaang — which sits in the shadows of three Sarnia refineries – says he experiences the effects.

“There’s days when just for no reason at all I’ll have trouble breathing and I’ll have to use an inhaler to open up my lungs...I’m just breathing in all that crap.”

Over the years when Simon would leave town to play professional hockey his asthma would get better, he says. When he returned, Simon says, so did the asthma.

“It’s something that I deal with on a weekly basis.”

Push to close emissions gap goes back to meetings in 2001

The push to close Canada’s emission gap with the U.S. dates back to meetings between lawmakers and industry in 2001. Federal and provincial partners, industry and non-governmental organizations came together to develop “annual facility-wide emissions caps for a wide range of air pollutants from Canadian refineries.”

A key element of that effort was a “benchmarking analysis” comparing Canadian refinery emissions with comparable U.S. refineries.

A decade later, in 2011, a second working group convened.

“The idea here was, ‘What's the minimum everyone should be meeting’?” said Ken Smith, a chemical engineer formerly with Environment Canada and Ontario’s Environment ministry, who chaired the initial discussions.

But after a year’s worth of meetings, including secret discussions with industry, there was an “impasse,” the final report says.

“Consensus is a ridiculous concept when it comes to having to protect human health and the environment and pass regulations,” said EcoJustice’s MacDonald, who suggests the federal government should have stepped in. “You're never going to get industry to agree to being regulated and being forced to reduce their emissions… The federal government dropped the ball.”

Canadian industry spokesperson Boag says a key challenge for reaching emissions parity with the U.S. is the investment required to lower emissions. A “key condition” in reaching lower targets, he said, was preserving the “competitiveness of the Canadian refining sector.”

But his members are not opposed to regulation and have made significant efforts to reduce emissions ahead of regulations, he said.

“I am confident that gap that may now exist today, over the next...number of years will be closing, not only in the case of Sarnia and Ontario, but in other jurisdictions as well.”

Since 2000, the U.S. Environmental Protection Agency has entered into 37 agreements with U.S. refinery companies covering 112 plants. Those “settlements” require the companies to make “significant” reductions in nitrogen oxide and sulfur dioxide emissions along with reductions in volatile organic compounds and particulate matter emissions.

The result: an approximately 75 per cent decline in nitrogen oxide and sulfur dioxide since the agreements began in 2000.

“The technology is there. We can get reductions in these emissions...There has to be a regulatory driver that pushes us in that direction.”

Catherine McKenna, federal Minister of Environment and Climate Change, did not agree to an interview for this story.

Her spokesperson, Caroline Theriault, provided a written statement that reads: “Following a decade of inaction under the previous government, our government is taking action to finalize new national regulations to reduce emissions of air pollutants that are harmful to human health and that contribute to smog from the petroleum and petrochemical sectors – including refineries.”

The Canadian government has recently introduced draft regulations for one group of pollutants, volatile organic compounds, which is expected to reduce refinery emissions when brought into force. But when asked whether widespread emissions caps or minimum requirements are still under consideration, federal government officials did not respond.

This is part of an ongoing investigative series called The Price of Oil. It is the largest investigative collaboration of its kind in Canadian history bringing together more than 50 journalists, editors, students and teachers from four journalism schools (Concordia, Ryerson, University of Regina and UBC) and three media outlets (Global News, Toronto Star and the National Observer) to examine the hidden costs of Canada’s oil industry.

What a disgrace and an

What a disgrace and an embarrassment and just another indication of how our governments are under the thumb of the oil and gas lobby. And if our ability to refine for our own consumption results in vast amounts of pollution, then maybe it's time to shut down all refining and let the U.S. do it for us. As such we shall ever be the hewers of wood and drawers of water.