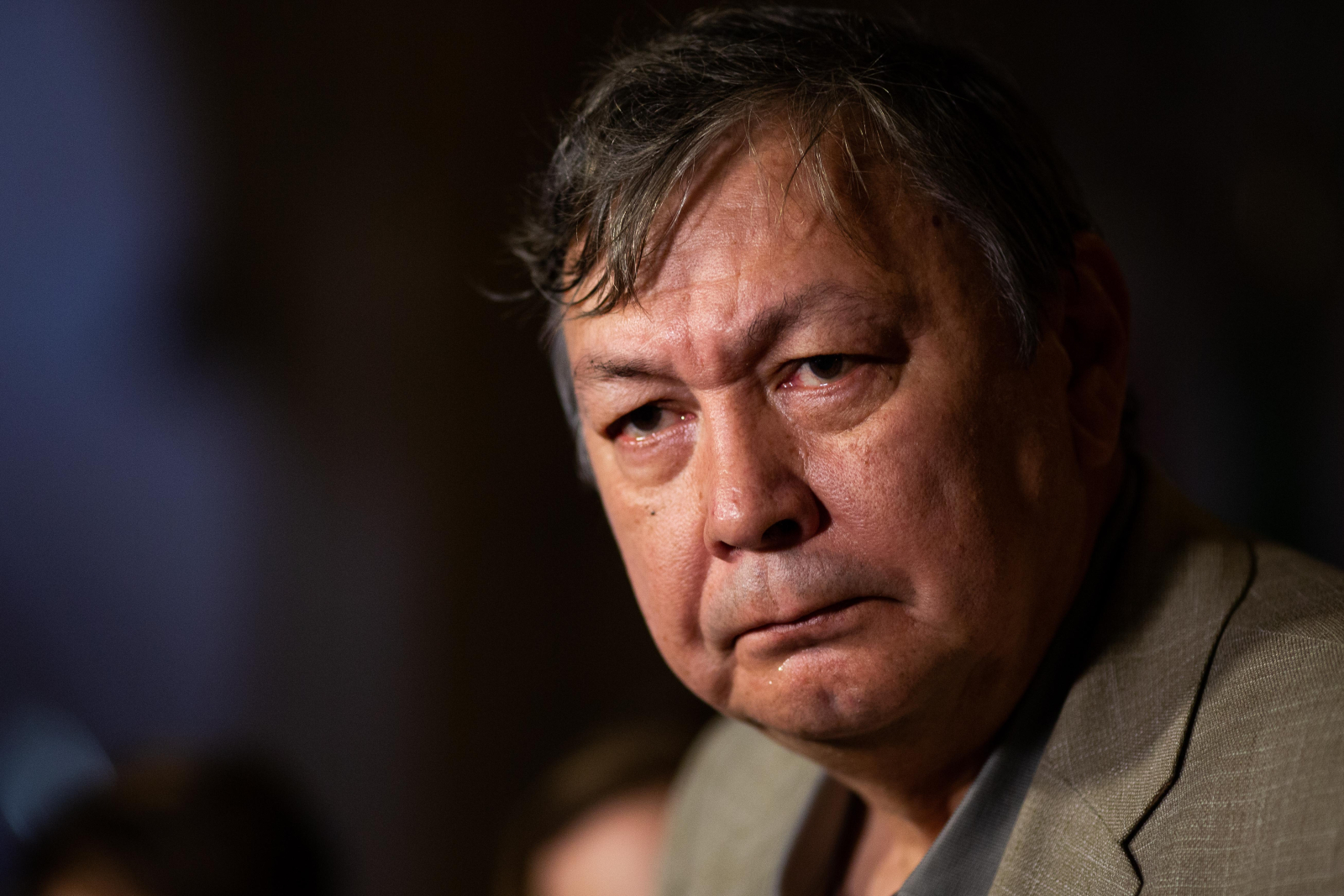 John Helin, mayor of the Lax Kw'alaams Band, speaks to reporters in Ottawa on May 3, 2018. Photo by Alex Tétreault
Previous story
Next story

The mayor at the centre of debate over an emerging oil pipeline project came to Ottawa to stand with opposition Conservative Party members against the Trudeau government's B.C. tanker ban.

John Helin, mayor of the Lax Kw'alaams Band in northwest British Columbia, was in Ottawa on May 3 to tell Prime Minister Justin Trudeau that his government’s bid to impose an oil tanker moratorium is “imposing on us more hardship, without any consultation."

“The prime minister talks about self-determination, reconciliation, and all those nice words that don’t really translate on the ground in our community," he said at a press conference outside the House of Commons, flanked by the Conservative critics for natural resources, transport and Crown-Indigenous relations.

The House of Commons has been debating Bill C-48, which would put into law Trudeau's proposed ban on oil tankers carrying over 12,500 metric tons of crude oil from an area reaching from the Alaska border to the northern tip of Vancouver Island.

Trudeau promised the tanker ban during the 2015 election and moved it forward when he approved two pipelines, Kinder Morgan’s Trans Mountain and Enbridge’s Line 3, in 2016. The bill is now at report stage in the House, after which it will go to the Senate.

The government says the tanker ban is necessary to protect the ocean areas to the north, east and south of Haida Gwaii — known as Dixon Entrance, Hecate Strait and Queen Charlotte Sound respectively — from the risk of oil spills.

But Lax Kw'alaams, which is east of the intersection of Dixon Entrance and Hecate Strait, have filed a legal challenge against Canada and B.C., hoping to win a court ruling that the tanker moratorium discriminates against them by blocking their plans to develop an oil export port.

Mayor at centre of debate over Eagle Spirit

Helin is the brother of Calvin Helin, the president of Eagle Spirit Energy Holding, which has proposed a $16-billion Eagle Spirit oil pipeline from Alberta to the west coast.

On Monday, the Conservatives hammered the government over the tanker ban bill, and the mayor's name came up. Transport critic Kelly Block suggested the bill was a "significant stumbling block" for Eagle Spirit.

Transport Minister Marc Garneau said the government was implementing its election promise, and that many First Nations "wholeheartedly support the moratorium." In another exchange, Garneau suggested not all Lax Kw'alaams agreed with John Helin.

The debate played out the same week that chiefs gathered across the Ottawa River in Gatineau, Quebec at a special assembly to discuss new federal legislation.

On the sidelines of that event, the Treaty Alliance Against Tar Sands Expansion declared it had secured a major new ally in its fight against Trans Mountain, Line 3 and other pipelines: the organization representing chiefs from 133 First Nations across Ontario.

“The allied signatory Indigenous Nations aim to prevent a pipeline, train (or) tanker spill from poisoning their water and to stop the Tar Sands from increasing its output and becoming an even bigger obstacle to solving the climate crisis," reads a letter from the Chiefs of Ontario, supporting the treaty alliance.

The oilsands are the third largest reserve of crude oil in the world after Saudi Arabia and Venezuela, but oilsands operators have struggled to compete in international markets due to a costly and energy-intensive p;roduction process. The industry has said new pipelines would help support jobs and growth.

Meanwhile, opponents say Canada will never be able to meet its climate change goals unless it stops expansion of the oilsands industry.

For his part, Helin said consideration of the environment was top of mind. “We’ve been in our communities for thousands of years, and we will not agree with something that would destroy our environment, whether it’s water, sea, land or air,” he said.

'One of the biggest infrastructure investments'

Helin was joined at the press conference by Block, as well as Conservative natural resources critic Shannon Stubbs and Crown-Indigenous and northern affairs critic Cathy McLeod.

Stubbs said Lax Kw'alaams were “not consulted about the tanker ban, and did not consent to it," and the tanker ban was "yet another government obstacle imposed in their way of building economic diversification and a legacy now and for their future."

She also argued the ban threatens to undermine Eagle Spirit, which she called “one of the biggest infrastructure investments ever in Canada.” She noted it would start in her riding of Lakeland, in Alberta.

“It’s quite stunning to see politicians recognize the disproportionate poverty experienced by Indigenous communities, and to talk about reconciliation, while also imposing legislation that undermines the efforts of communities like the Lax Kw'alaams to make decisions in their own territory and to pursue economic opportunities and self-sufficiency in the near term and for generations,” she said.

Asked for his reaction to the comments by Helin and Stubbs, Garneau said no relationship is more important to Canada than with Indigenous Peoples.

"The Government of Canada consulted extensively with Indigenous groups, communities and stakeholders to gather input on the proposed legislation for the tanker moratorium and we constantly listen to their concerns," said spokeswoman Delphine Denis in an email.

"Since January 2016, the government has held over 70 engagement sessions to discuss improvements to marine safety and formalize the oil tanker moratorium. We will continue to work with Indigenous peoples and stakeholders across the country to advance measures to enhance marine safety, protect the environment and communities, and support economic development."

Yet another proof Conservatives don't give a damn about the environment, all they care about is business at all costs.

It’s interesting the Government ban on tankers above 12,500 tons leaves the ongoing 10,000 ton American articulated barges off the radar as they continue shipping oil for Alaska through extremely vulnerable inside passage routes.
These shipments should be offshore in bigger vessels in safer waters with time to respond. I am referring to the Nathan E Stuart sinking and spill and the very close call of the Jake Shearer articulated barge at Goose Island.