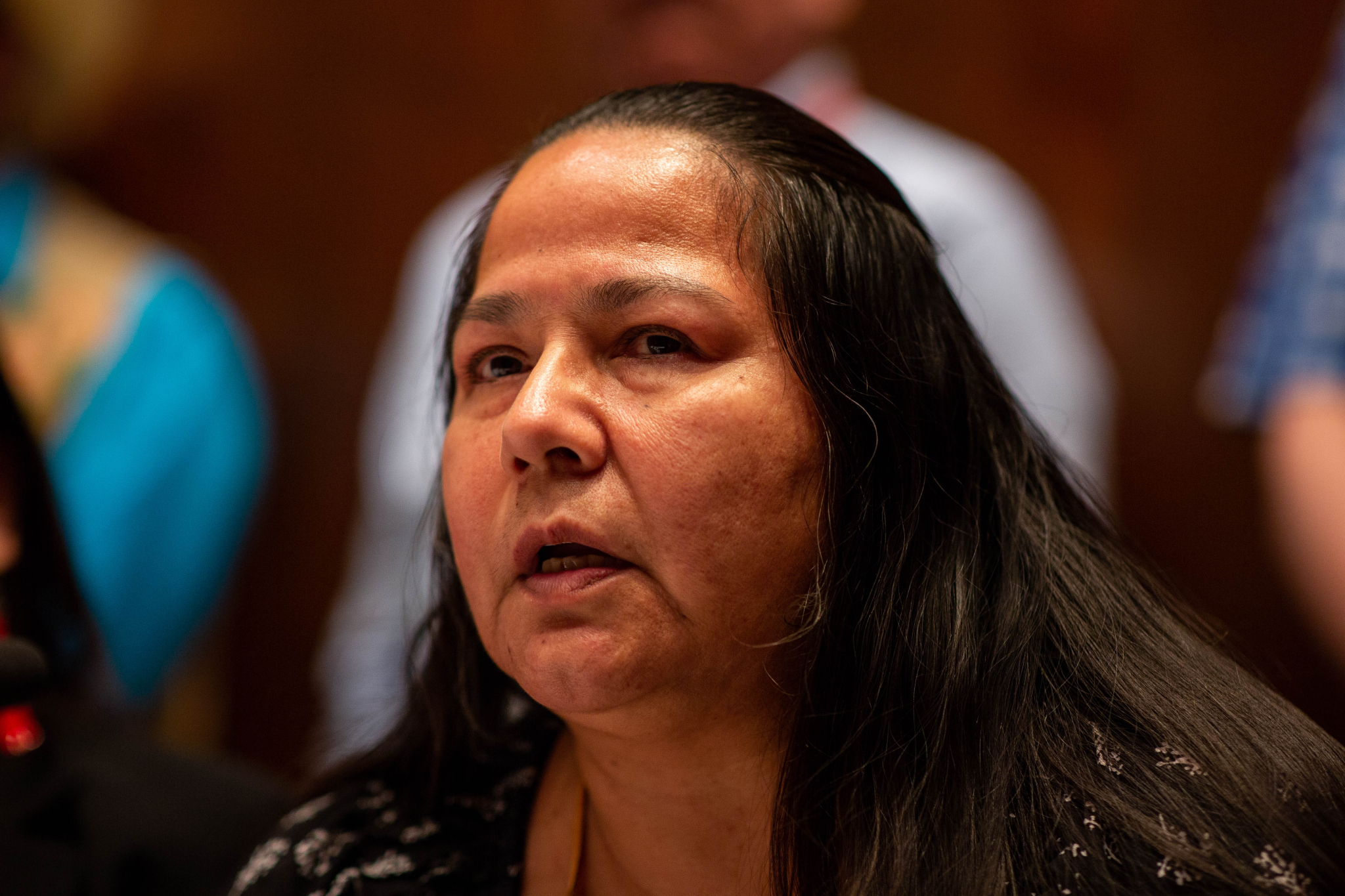 Chief Judy Wilson speaks to reporters about Kinder Morgan's Trans Mountain pipeline expansion at the Hilton Lac-Leamy in Gatineau, Que. on May 2, 2018. Photo by Alex Tétreault
Previous story
Next story

Chief Judy Wilson was among a group of Canadian Indigenous leaders who reaffirmed their opposition to the Trans Mountain proposal at the meeting where shareholders passed two of three non-binding proposals calling for improved environmental reporting.

Wilson represents the Neskonlith Band of the Secwepemc Nation, which asserts land title over a stretch of more than 500 kilometres of the proposed 980 kilometre pipeline, and is fighting the pipeline expansion in court.

"The passage of the sustainability reporting resolution is a victory and a sign that institutional shareholders are concerned about the opposition to the Trans Mountain expansion project and the perceived lack of understanding that the company has demonstrated of the rights of indigenous people," Wilson told a news conference following the meeting.

The company played down the vote, however, along with passage of a second resolution that called on the company to publish by 2019 an assessment of the long-term impact that an international goal to limit the rise of global temperatures to 2 degrees Celsius would have on its assets and set out how the company planned to respond to a transition to a low-carbon economy.

In response, Kinder Morgan executive chairman Rich Kinder, said: “With regard to the two stockholder proposals that passed today: as you are probably aware, these proposals are non-binding; however, the Board will carefully consider the proposals and the information contained in the supporting statements in determining what actions to take with respect to them.”

The resolution hailed by Wilson was proposed by the New York State Common Retirement Fund. It seeks an annual sustainability report describing Kinder Morgan’s assessment of the environmental, social and governance-related issues it considers most important. Such a report should, beginning in December 2018, address the policies, practices, metrics and goals the company has for dealing with the risks associated with climate change, waste minimization and other issues, according to the resolution.

The company's board of directors said ahead of the vote that an annual sustainability report "would be an expensive and time-consuming exercise that would be largely duplicative of information already available on our website or otherwise publicly available."

It said such a report could cost "millions of dollars per year in incremental headcount, systems and production costs" that were not justified given it already publishes policies on environmental, health and safety, indigenous peoples and biodiversity.

In her address to shareholders, Wilson said that the legal, political and economic climate have all shifted against the Trans Mountain project since it was first proposed in 2012.

"The passage of the sustainability reporting resolution is a victory and a sign that institutional shareholders are concerned about the opposition to the Trans Mountain expansion project," says Chief Judy Wilson. #cdnpoli #KinderMorgan

“Canada has now signed the UN Declaration on the Rights of Indigenous Peoples. First Nations must give free, prior, informed consent to projects that impact our territory, and we do not consent,” she said at the meeting. “Your company misinterprets Canadian law at your own peril. Shareholders should not be misled.”

Facing Kinder Morgan's May 31 deadline on whether to move forward or shelve the $7.4 billion project, the federal government, which has given its approval, is rushing to convince Kinder Morgan to keep the project moving despite opposition from Indigenous and environmental groups, the provincial British Columbia government and municipalities of Burnaby and Vancouver.

The Secwepemc Nation is currently challenging the federal government’s approval on the grounds that Indigenous communities were not adequately consulted. The court’s decision is not expected until June.

Evidence uncovered in a recent investigation by National Observer showed that government officials sped up their review of the project following lobbying by Kinder Morgan in early 2016 and that a high-ranking official instructed public servants in October 2016 to find a "legally-sound" way to approve the oil pipeline, several weeks before the government had concluded its consultations with First Nations.

If built, the expansion would almost triple the capacity for oil sands product flowing from a facility near Edmonton to a terminal in Burnaby near Vancouver to 890,000 barrels a day. Ottawa and the oil industry say the expansion is needed to expand the export market for Canada’s oil and gas, while critics worry it tramples on Indigenous land rights and poses an environmental hazard.

The proposed new line would mostly carry diluted bitumen and other heavier oils.

“No matter what the Canadian government does to address political or financial risk, it will not change our resolve to oppose the project. This will result in more delay, risk and uncertainty,” Wilson told Kinder Morgan investors while moving the resolution calling for the company to issue annual sustainability reports, which passed with a majority of votes.

Wilson said another Indigenous leader, Rueben George, of Tsleil-Waututh Nation, had spoken to the company’s annual meeting two and three years ago to warn the company that the pipeline expansion would not be built, and that it seemed Kinder Morgan was finally coming around to this reality.

“…We are sorry that all this time and money has been spent. It could have been avoided, and having a sustainability report might have allowed your board of directors to more accurately evaluate these project risks,” she said.

A third proposal asking for a report on methane emissions, a major long-term contributor to climate change, did not pass.

The company opposed each of the three proposals ahead of the votes.

Meanwhile, back in Canada at Kinder Morgan’s existing terminal facility in Burnaby, protestors sought to block access on both land and water. Paddlers launched at sunrise to blockade the floating gates of the facility, which were installed last year following a large flotilla protest, while other groups blocked the facility's two land-based access points.

Kinder Morgan shares closed up 2.4 per cent on Wednesday while stock in the Canadian subsidiary ended down 4.1 per cent following the meeting. A day earlier Vancouver mayor Gregor Robertson said he did not believe the project would proceed given the fierce opposition.

Environmental sustainability should also be included in the approval process of another very controversial project, the "Eagle Spirit Energy" pipeline project, that would carry (if constructed) 2 million barrels per day of crude oil from the Alberta bitumen oil sands to Prince Rupert. This represents more than twice the amount of crude oil that would carry the Kinder Morgan Trans Mountain pipeline.

Not to worry. The citizens

Not to worry. The citizens of Prince Rupert are at least as opposed as those of Kitimat, Kitimaat were. It's a non starter.

Good for chief Wilson; She

Good for chief Wilson; She laid it out quite plainly. And shame on KM, reminding everyone that the votes are 'non binding' (yes we know that, and we 'get' what that means for KM), and for arguing that a sustainability report would be too expensive and time consuming to produce.

Shareholders have been warned. And the company response was likely expected. Tax dollars should not be used to prop up this crowd.