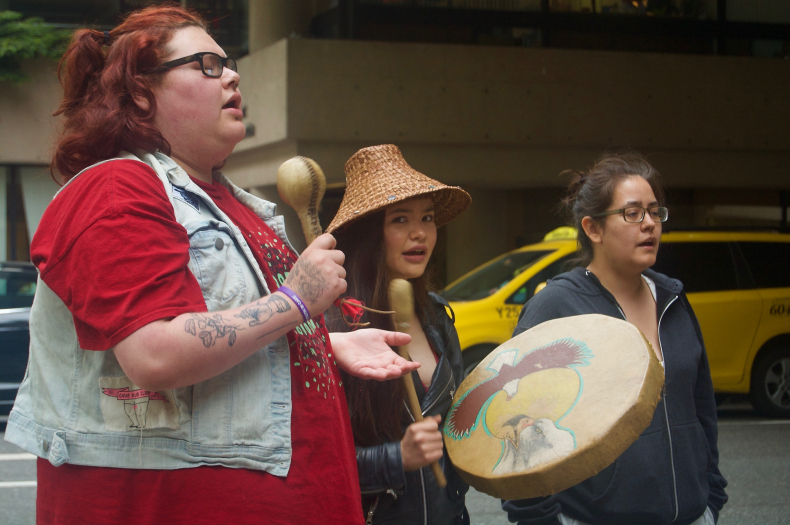 Songs were sung at a morning rally on May 7, 2018, before defendants went into the B.C. Supreme Court. Photo by Dylan Sunshine Waisman
Previous story
Next story

Two people have pleaded guilty to contempt of court for crossing the court-ordered injunction line while protesting the Trans Mountain pipeline expansion at the gates of its Burnaby terminal construction site in British Columbia.

Maggie Binet, one of the defendants, pleaded guilty to civil contempt of court, despite the fact that Crown attorney, Trevor Shaw, was favouring criminal charges. Speaking with emotion, she said she has “no disrespect for the court and its processes." Her decision to break the injunction was about survival, she said. “We humans are a part of nature and deeply connected to it. I broke the injunction so later on I know I did everything I could to protect our home in a peaceful manner."

As she ended her submission, most of the members of the gallery stood and applauded.

Replying to arguments often raised by the defendants related to protecting the earth, Shaw asked, “While the accused aim for a better world, we must ask, will it be a better world if it is lawless?”

Ian Angus, a professor and scholar, pleaded guilty to criminal contempt, requesting that the $500 fine be reduced to $1 to symbolically recognize that it was his “civic, natural and human responsibility” to commit civil disobedience. He explained, “the critical intelligence of citizens is essential to a non-repressive social order." Of the role of civil disobedience in justice, he said, “It is only through acts which test the practice of law in specific cases that law can be revised more closely to approximate justice”.

Angus highlighted the existence of Indigenous law and rhetorically asked the court why we, as Canadians, are not subjects to that law as well. Members of the audience slowly and silently stood up, raising their arms to show their support for his presentation.

Both requests were immediately denied by B.C. Supreme Court Justice Kenneth Affleck, who remained firm in his conviction that the matter is an issue that strictly warrants consideration of fact and law, while other considerations such as the environment or Indigenous rights, which are frequently raised by defendants, are not matters he can consider.

Six other defendants, out of the 200 total arrestees, have acknowledged their willingness to plead guilty to criminal contempt of court later this week. The consequences are a $500 fine, or 25 hours of community service supervised by a probation officer.

The Kinder Morgan pipeline expansion project has been approved by the federal government, and the company intends to increase the barrels of oil per day (bpd) transported from Alberta to B.C.'s coast from 300,000 bpd to 890,000 once the new pipeline is operative.

The approval is currently under judicial review in the court of appeal, with 15 First Nations, the province of B.C., and the cities of Vancouver and Burnaby in fierce opposition to the expansion, and the federal and Alberta governments in support of the project.

After the fifth outburst of applause, Affleck threatened to “invite the sheriffs to remove such people,” saying that he might escalate his order for arrests to take place in the court.

But the current appeal has also been seized with an unexpected motion by lawyers for the Tsleil-Waututh Nation, based on recent reports in National Observer, that the court reopen the case and consider new evidence. The motion is exceptional since hearings wrapped up last fall, but lawyers for the nation noted that there was a legal precedent for this to be allowed, based on an unrelated civil case. The lawyers also said in their motion that the evidence uncovered by National Observer indicated that the process was rigged and that the government failed its legal duty to consult affected First Nations.

Civil or Criminal contempt of court?

Criminal contempt of court, which all defendants are being charged with, is not a Criminal Code offence, therefore those arrested will not apparently be burdened with a formal criminal record. However, the conviction may still be included in some police databases, and may somewhat impact people's employment and travel.

The distinguishing element to take a contempt of court charge from civil to criminal is that it was committed in a public way. The public quality of the injunction breach must be flagrant, meaning that the behaviour is inflammatory, and designed to lessen the public’s respect for the court.

Shaw, the Crown lawyer, explained that “criminal contempt aims to deter others from defying the rule of law,” considering that “retaliation would be real if the courts are seen as unable to protect the rule of law."

A lawyer for several of the defendants, Neil Chantler, argued that criminal charges come with many “stigmas and repercussions” and are a disproportionate consequence for what was a “remarkably respectful and peaceful event.” He concluded, “if there were ever facts that called for an exercise of the court’s discretion to allow pleas of civil contempt, this would be it."

His comments were met with applause from the gallery, followed by a decisive denial of the request from Justice Affleck.

Discontent in the courtroom

Maggie Binet said, “if I had known my actions would be considered criminal I might not have followed through with them. The change of charge is impacting the authority of the police and diminishing trust. There should be an understanding throughout of all the levels of the legal system. There are a lot of people who might not have taken that action if they had known." Her comments were met with applause and loud murmuring from the audience, with someone loudly saying “definitely”.

Justice Affleck swiftly refused her civil contempt plea, giving her two options: “Plead guilty to criminal contempt, failing that, there will be a trial. What would you like to do now?” he asked.

“Bury myself in a hole? I am deeply disappointed,” she replied.

Following Affleck’s decision, Jack Bryceland, another defendant, asked the court why defendants had been “misled”, as the RCMP documents issued to arrestees, specified civil, not criminal charges. The court audience began cheering at the question, with several audience members exclaiming ‘Yes! Yes! Misled!”

At the fifth outburst of applause, Affleck threatened to “invite the sheriffs to remove such people,” saying that he might escalate his order for arrests to take place in the court.

Confusion in the courtroom

The majority of defendants are self-represented. Many have never had any prior legal experience, and therefore are often unfamiliar with legal nuances.

Noticing this confusion, one concerned lawyer asked the court, "I, as council, have some concerns that some questions asked by self-representing individuals show to me clearly that they may have some difficulty with the basic elements" of what it means to plead guilty.

She took the opportunity to remind the court that guilty pleas must be "must be voluntary, and it must be understood." Judge Affleck reassured her that for each guilty plea, he "will ask each person if they understand."

Some defendants claim they were not able to see the Crown evidence against them, despite the court expectation to receive guilty pleas today. One defendant spoke on behalf of several others, telling the court that they were unable to open the CDs provided to them, which contain RCMP video footage of their protest activity.

The threat of incarceration

One of 200 defendants, Cat Roivas, has been arrested three times, and has been released by the RCMP each time due to "mobility issues."

Affleck cautioned her that any further breach would result in her being held in custody until the date of her trial. She told the court she was "well-aware of the situation," and would be pleading not guilty to criminal contempt of court.

Affleck confirmed he would not hold her in custody today, but the consequence would still loom should she choose to break the injunction again. No one has been held in custody over this matter.

The consequences of missing trial dates

The issue of adjournment was a central focus of today's court session, with several defendants requesting for their trials to be adjourned until October. Affleck prefaced the requests by saying he would "not be particularly sympathetic to adjournment."

One defendant, Tara Rose, a university student, was one of the few to have their trial date pushed back. Her trial was scheduled for the same time as a mandatory course to finish her teaching degree. She was worried she would have to miss the course and repeat the year. "It was fantastic, it saves me a year of schooling, I'm really grateful that I got my lawyer through legal aid, and I'm grateful that Judge Affleck was sympathetic to that."

Not everyone was so lucky. Dr. Mark Fettes, president of the Universal Esperanto Association, has an annual general meeting in Portugal scheduled for the same date as his trial. Affleck denied his request to adjourn until October.

As a result, Fettes told the National Observer his only option now is likely going to be to plead guilty. He was prepared to plead guilty to civil contempt, but does not believe a criminal charge is appropriate for breaking the injunction. "I was there because of my conscience. After years of working with Indigenous peoples in Canada, it simply left me feeling like in order to be true to my convictions, I had to be there. I don't believe that warrants a criminal charge."

Editor's note: This article was updated at 7:15 p.m. ET on May 8, 2018 to add additional details and background, including names of the Crown and defence lawyers.

We are in a sad state as a

Criminal contempt seems like a rather narrow offence. From the article, "The distinguishing element to take a contempt of court charge from civil to criminal is that it was committed in a public way. The public quality of the injunction breach must be flagrant, meaning that the behaviour is inflammatory, and designed to lessen the public’s respect for the court."
Really, who ever does anything DESIGNED to lessen the public's respect for the court? Certainly that can hardly be construed as the motivation of anyone involved in struggling against the Kinder Morgan pipeline. It seems to me that in a fair court, with decent representation, such a charge surely could not lead to conviction.
Which to me says that the apparatchiks who decided on criminal contempt charges are cynical bastards who figured accurately that most defendants wouldn't have what it took (money, expertise) to fight the case, would plead guilty and get whacked. Thus even if everyone who fought the case got off, the fate of the guilty pleas would serve as a warning to others, even though they're clearly not actually guilty of criminal contempt and those bringing the charge know it. Now that, I'm contemptuous of.

Seriously, respect for the

Seriously, respect for the law is not synonymous with fear of the law. Changing the charge from a civil to a criminal offense, just suggests which side the court is on, for whatever reason....its a move designed to scare future protesters away from injunction created safe sites for Kindermorgan.

But if you read the article, there's a beautiful escalation built into this arrangement.

Talking....telling the story...is the real clue to bringing the kind of change we need now. People brave enough, farsighted enough, and in solidarity with the earth enough, should fan out into the community and begin the call to action.

What's more....with the guilty plea, they should thank the court for this opportunity to further the work. The people united, can never be defeated. In this case, it just might be the case.