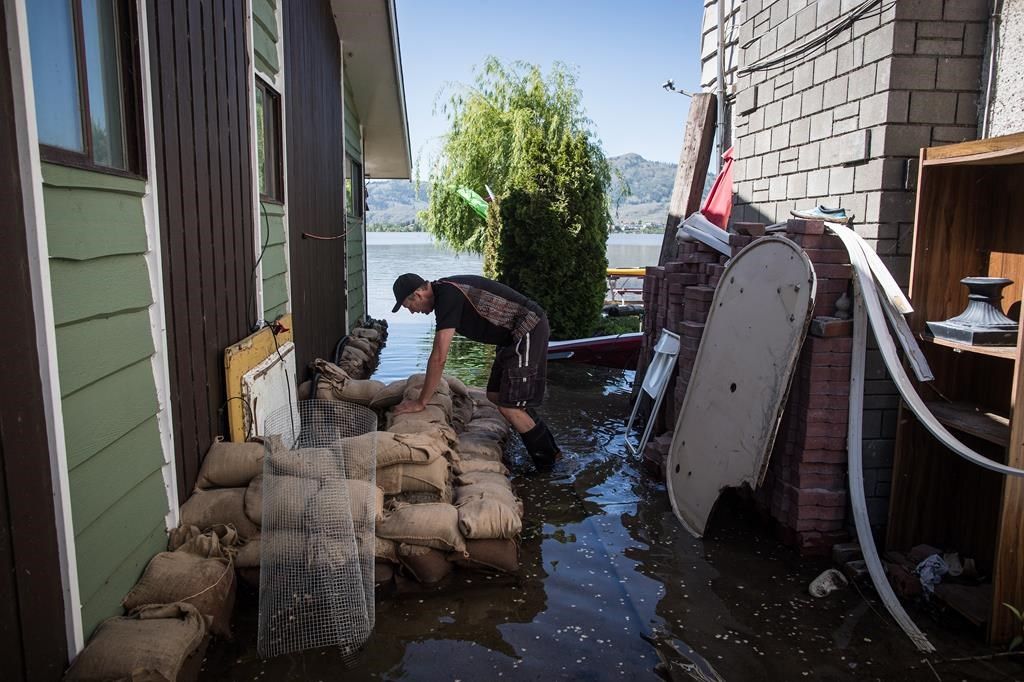 Steve Tye, of Surrey, B.C., checks the water level in the crawl space under his lakefront summer home as he uses pumps to remove the water that seeped in due to flooding, in Osoyoos, B.C., on Sunday, May 13, 2018. Photo by The Canadian Press/Darryl Dyck
Previous story
Next story

Residents and emergency crews are bracing for another surge of floodwaters, after surveying damage in some of the worst-hit parts of British Columbia during a reprieve over the weekend.

The Regional District of Kootenay Boundary said about 3,000 residents remain under an evacuation order due to the ongoing threat of a second flood, with high forecasted temperatures expected melt snow at higher elevations.

Rivers are expected to rise by mid-week, reaching levels close to those experienced Thursday, the district said.

While it has downgraded 74 properties in Grand Forks' downtown from evacuation orders to evacuation alerts, the regional district is urging property owners to keep sand bags in place and be prepared to leave again at a moment's notice.

Members of the public are reminded not to enter evacuation order zones, even on boats, because of serious safety concerns.

The regional district said re-entry plans for several neighbourhoods have been put on hold now that river modelling shows a second crest should reach levels similar to last week.

Some dikes failed when overtopped by floodwaters and crews are repairing them in priority sequences, as well as pumping water from low-lying neighbourhoods close to the dike breaches, the regional district said.

The Similkameen River is projected to reach historic levels by Friday, potentially pushing several feet of additional water back into Osoyoos Lake, the Regional District of Okanagan-Similkameen said.

About 100 properties have been evacuated in the area and another 600 are under evacuation alert. All rural electoral areas and several municipalities are under states of emergency.

Snowpack levels were more than double the average in the district, it said.

A high stream flow remains in effect for the Fraser River.

Premier John Horgan has said this may be a "one-in-one-hundred-years" flooding season and the provincial government will review its options for further support Monday morning.

Solicitor General Mike Farnworth visited Grand Forks on Sunday, one of the most devastated communities.

"This is — I've never seen anything like it," he said, describing 80- and 90-year-old homes that have been destroyed by the disaster and water reaching the windows of other houses.

He said the province will support the community, but funding will depend on the extent of damage over the next week.

"There needs to be a long-term commitment to this community and this region," Farnworth said. "And as a province, we're saying, we're going to be there and standing with the people of this community to make sure that commitment follows through."