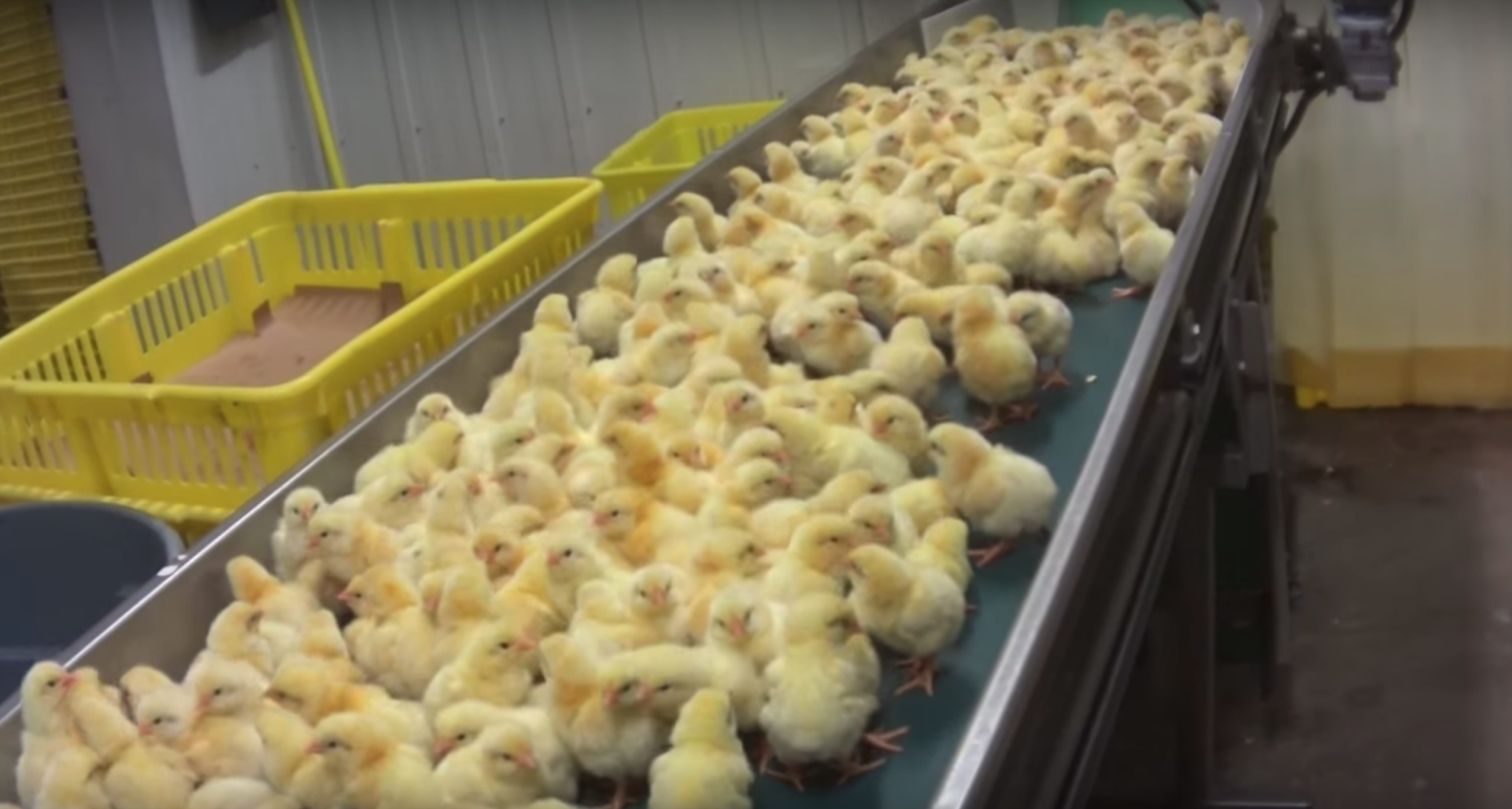 Chicks often meet painful deaths at factory farms. Above, a still from footage allegedly shot at a hatchery owned by Maple Lodge Farms in Beamsville, Ont. between December 2017 and February 2017. Image courtesy of Mercy For Animals
Previous story
Next story

The Ontario SPCA is reviewing graphic new footage that shows staff at a hatchery, reportedly in southern Ontario, injuring and killing baby chickens by hand.

The two-minute tape allegedly shows hatchery employees roughly handling chicks, tossing them into a macerator to be ground alive, snapping their necks and beheading them against sharp edges. It was released May 9 by the international advocacy group Mercy For Animals, which says the film was recorded between December 2017 and February 2018 at Fleming Chicks Ltd. in Beamsville, Ont.

The Ontario Society for the Prevention of Cruelty to Animals (SPCA), whose investigators enforce any law pertaining to the prevention of cruelty to animals and animal welfare, is now the reviewing tape, but has not started a formal investigation. According to spokeswoman Melissa Kosowan, no one has filed an official complaint regarding the video.

"We are currently reviewing the footage and will follow up accordingly if we determine that industry codes of practice have been violated at this operation," she said in an emailed statement.

"These are day-old baby chicks and they’re certainly not being treated that way," said Lindsay Wolf, Mercy For Animals' vice-president of investigations, in an interview. "They’re being treated like parts of a machine...This is the level of cruelty we document on a regular basis."

Warning: footage may disturb some viewers

Footage shot undercover by a Mercy For Animals whistleblower shows staff at a factory farm roughly handling, and killing baby chickens. It was filmed between December 2017 and February 2018, at a hatchery allegedly owned by Maple Lodge Farms in Beamsville, Ont.

A history of animal cruelty

In 2013, Maple Lodge Farms was fined $80,000 for two counts of failing to transport chickens humanely after 2,000 of its birds froze to death on their way to slaughter during the winter of 2008 to 2009. An Ontario Superior Court judge ordered the company to spend $1 million over three years to ensure future compliance with federal animal health rules, including modifications to its fleet of trailers used to carry the hens.

"They’re being treated like parts of a machine...This is the level of cruelty we document on a regular basis," says @MercyForAnimals VP of investigations Lindsay Wolf. #cdnag #onpoli

In March 2015, the company launched an internal investigation to "verify the facts" after hidden-camera footage, also released by Mercy For Animals, showed chickens being slammed into metal shackles, shocked with electricity, and having their throats cut open while still conscious. In that video, allegedly shot at a Maple Lodge Farms slaughterhouse in Brampton, chickens were also shown frozen to death after transport.

Two years later, while still on probation for previous convictions, Maple Lodge Farms was fined $6,000 after at least 860 hens froze to death in January 2013 in transit between Chazny, N.Y. and Brampton, Ont. It was taken to court by the Canadian Food Inspection Agency, which has the authority to charge producers and processors under the Health of Animals Act.

The company's website says it has a "zero tolerance" policy for violations of Canada's humane care policies, and requires its staff to comply with existing provincial and federal regulations, in addition to the National Farm Animal Care Council's Codes of Practice for the Care and Handling of Poultry.

"Maple Lodge Farms is committed to the respectful, human treatment of chickens during all phases of rearing, transportation and slaughter," it reads. "Treating the birds humanely that we rely on for our livelihood is a priority and is a moral responsibility that we take seriously."​

Mercy For Animals has been conducting undercover investigations in Canada since 2012, using volunteer whistleblowers who apply for jobs at factory farms and slaughterhouses, and use a hidden camera. The hatchery footage released last week is the 13th such operation, said Wolf, adding that "100 per cent" of Canadian investigations to date have produced footage of harsh or unethical treatment toward animals.

"The problem is really surrounding the systemic issues in the factory farming industry," she told National Observer. "We’ve just created this massive industrialized industry where we're treating animals like they're inanimate objects."

Anna Pippus, director of farmed animal advocacy for Animal Justice, said that while the treatment of the chicks in the video may be unethical, it doesn't strike her as "technically illegal" under any federal or provincial law. But there's no doubt, she added, that existing regulation on the handling and euthanasia of chicks could be enforced "more progressively" in factory farms and hatcheries across the country.

"The laws are really silent about what farms are and are not permitted to do," Pippus, a lawyer with expertise in farmed animal law, told National Observer. "I can tell you that everything I saw in the video, everything documented at the hatchery, is considered standard practice and normal across hatcheries in Canada and around the world."

Ontario's animal protection laws are vague, she explained, specifying only that animals that must be killed should be euthanized humanely in a way that "minimizes the pain and distress." The legislation is not species-specific or sector-specific, she added, which has led to lax enforcement, particularly on factory farms.

The National Farm Animal Care Council's codes of practice outline best practices for the handling and euthanasia of poultry, but are not legally binding. Decapitation, manual blunt force trauma, and maceration are on its list of acceptable methods for chicks in hatcheries, but there is no existing framework to ensure the procedures are carried out properly, said Pippus.

"Euthanasia methods, like everything else with farming, simply aren't prescribed under legislation," she said. "There's no enforcement mechanism... so there is a real problem in terms of enforcement anyway, even if the codes of practice were to have some form of robustness."

Hatcheries are regulated federally by the Canadian Food Inspection Agency, Pippus added, but that legislation does not set standards for permissible animal welfare.