Residents across B.C. Interior brace for another deluge of flooding 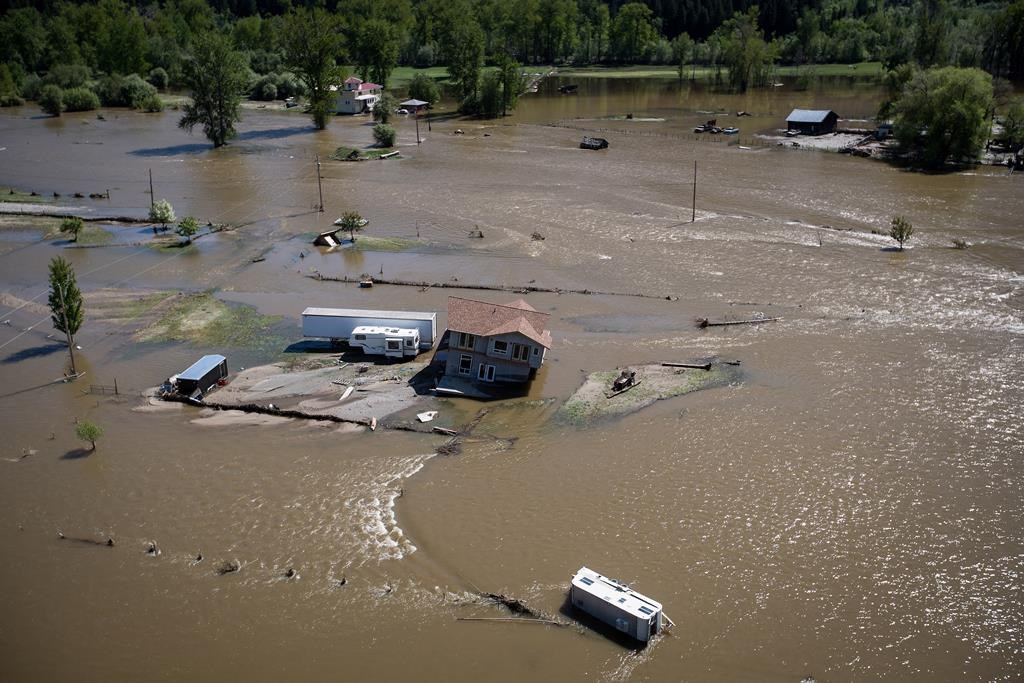 A home damaged by floodwaters is seen in an aerial view, near the Kettle River in Grand Forks, B.C., on Saturday May 12, 2018. File photo by The Canadian Press/Darryl Dyck
Previous story
Next story

Unseasonable heat and the potential for rain over the next seven to 10 days could force thousands of people in British Columbia's Interior to evacuate their homes as rivers and lakes continue to swell and burst from the melting snowpack, officials said Monday.

David Campbell, head of the B.C. River Forecast Centre, said many parts of the province have been hit with temperatures six degrees above average for the past three weeks, which has accelerated the melt for the lowest lying snowpacks in the Interior but will shift to mid and upper elevations.

"That's creating a transition in terms of the rivers that are susceptible and at most risk," Campbell said during a conference call.

"Clearly this is an extremely intense weather system in terms of the temperatures, and certainly coming at a time in the season where rivers are already flowing very high."

The areas of highest concern were the Okanagan, Boundary, Shuswap, and the Similkameen Valley, where he said they've "already experienced significant challenges." Those areas also includes parts of the north Okanagan east of Vernon into Enderby and Salmon Arm, where higher elevations have kept upper snowpacks from melting.

Duffy said rainfall and hot weather in the Kootenays and other areas that have not yet experienced similar flood levels to the rest of the Interior could be particularly challenging this weekend, including Prince George, Quesnel, and the Bulkley lakes district.

Campbell said parts of the Fraser Valley could reach historic flow levels as the Fraser River reaches almost 12,000 cubic metres per second in Hope by the weekend, and could grow to levels unseen since 1948.

"The next seven to 10 days here is really going to be the crux for the Fraser," he said.

Campbell did have some good news for residents in floodwatch areas, saying the mid-elevation snowpack is now dwindling and some areas are on the cusp of transitioning away from the amount of melting snow that drives flooding.

The Regional District of Okanagan-Similkameen said in a news release that residents of Hedley, the village of Keremeos, and those living along the banks of the Similkameen River should prepare for an imminent evacuation order, and people with medical conditions, mobility issues, and those with livestock or animals should evacuate immediately.

Community meetings were scheduled for Grand Forks, Osoyoos, and Rock Creek on Tuesday to update and prepare residents in light of the strong chance for a repeat of last week's flooding.

— By Spencer Harwood in Vancouver.

This is part of 'the race

This is part of 'the race against climate change' series?

What race? Or if there is a race, why is the tortoise still leading?

Time to get serious and admit that we can't have our cake and eat it too. We've already likely left it too late, and all the money KM is supposedly bringing to the Canadian economy won't be enough to clean up after all the CO2 inspired wicked weather fossil fuels have willed us.

Disaster TV is quickly becoming the new pastime. Can't wait for the forest fire coverage we'll all be treated to in a month's time (or less).

What most of us are jogging toward, is a cliff.