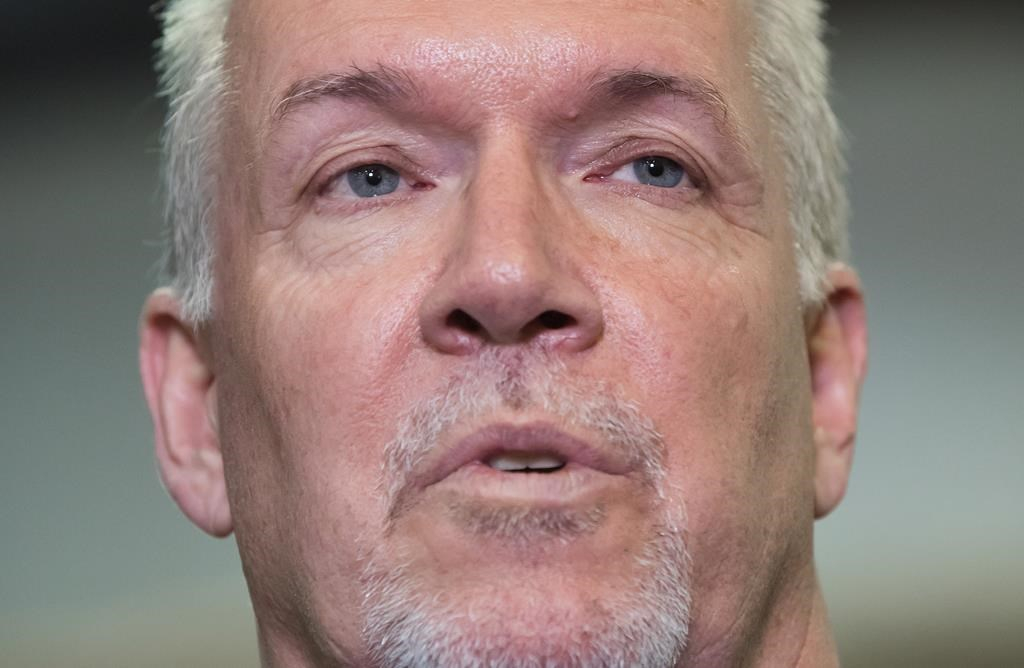 British Columbia Premier John Horgan speaks about the flooding situation in the province during a news conference in Chilliwack, B.C., on Wednesday, May 16, 2018. Photo by The Canadian Press/Darryl Dyck
Previous story
Next story

Horgan said he is trying to protect the province's interests by joining two legal cases over the project and asking the B.C. Court of Appeal whether the province has the right to preserve its environment through a permitting system for hazardous substances that are transported inside its borders.

"The federal government today is announcing it will spend public dollars to shore up a private company that knew the risks of proceeding with their project when they signed on," Horgan told a news conference in Chilliwack, B.C., where he was visiting areas affected by flooding.

"I made it abundantly clear that I believe it's not in our best interest to put at risk our marine economy and marine environment."

Earlier Wednesday, Finance Minister Bill Morneau said the federal government is willing to offer an "indemnity" to help ease the political risks for any investors to ensure the pipeline expansion can proceed.

Kinder Morgan has ceased all non-essential spending on the $7.4-billion pipeline project that would twin the existing pipeline between Burnaby, B.C., and Edmonton. The company wants assurances it can proceed without delays by May 31.

Horgan said blaming B.C. for the pipeline impasse is focusing on the wrong target.

"The prime minister called me back to Ottawa (last month) and said we were going to do something, and I said, 'Fair enough, do what you like,' and today I guess we're getting the first step of that," said Horgan. "It seems to me it's mostly rhetoric and hyperbole instead of substance British Columbians and Canadians can grab on to."

He challenged Ottawa to act on the pipeline.

"Either you are going to do something federal government or you're not," said Horgan. "Wanting to demonize me, that's fine, that's politics."

Earlier in Vancouver, Horgan said his approach on the pipeline reflects what he said he would do during last year's provincial election campaign.

"I'm defending the interests of British Columbia," he said. "I'm not causing any risks."

Horgan said the province asked the federal government to take part in a reference case to Supreme Court of Canada, but it declined so his government went ahead on its own reference case at the B.C. Court of Appeal to determine its jurisdiction.

Asked how Morneau's statement might impact the future of the pipeline, Horgan replied: "I'm not a seer. I don't know what the future holds. Mr. Morneau will do what he wants to do."

"Mr. Morneau appears more concerned in indemnifying a foreign corporation against risk to its investors than indemnifying British Columbia against the risk to our coast, to our environment, to tens of thousands of jobs," he said.

"Instead of the private sector paying to build this pipeline, taxpayers will now be responsible for cleaning up Horgan's mess," he said in a news release.

Although we're not holding

Although we're not holding our collective breath, I'm sure I'm not alone in waiting for an explanation about exactly what the "national interest" is!!

Thank you John Horgan for

Thank you John Horgan for doing what you can to defend the Canadian coast from pollution and without making character attacks. I applaud your integrity.