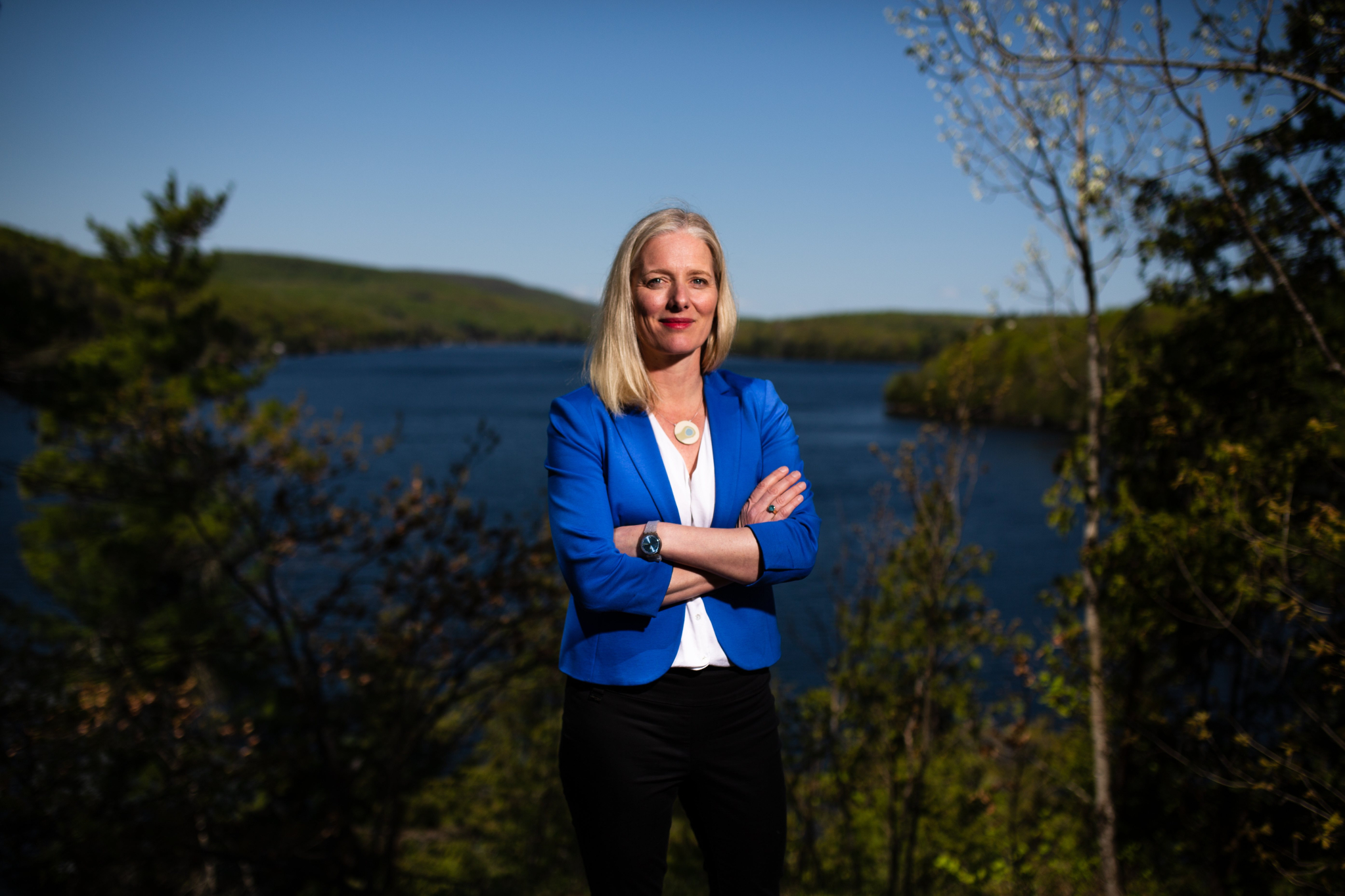 Environment and Climate Change Minister Catherine McKenna defended the work of federal scientists on Thursday in approving the project by Texas-based energy company Kinder Morgan, saying “I talk to scientists every day."

Her comments follow concerns flagged in peer-reviewed and governmental research, by First Nations and by British Columbia about the environmental risks of spills of diluted bitumen, the tar-like heavy oil produced by Alberta oilsands companies, that will be sent along Trans Mountain.

“We believe the science is there,” said McKenna, in an interview on the sidelines of the Women Kicking It on Climate summit that she hosted at Willson House in Gatineau Park, Que.

“You always want to be doing more science — we have great scientists in our department. But we made the decision to go ahead with the project, including the conditions, based on good science."

The summit brought together women climate leaders, such as European Climate Foundation CEO Laurence Tubiana and Moroccan minister delegate in charge of the environment Hakima el Haité, to come up with solutions to advance the Paris climate agreement.

In 2015, a Royal Society of Canada report concluded that Canada lacked the science to know what effect a spill would have on ecosystems. Environment Department chemist Bruce Hollebone told CBC Radio last month that the report showed "we know a lot less about the potential receiving environments where the spill might happen."

In January 2016, McKenna's department recommended more research and access to information on public health and safety and the "knowledge gaps and uncertainties with respect to hydrocarbon product behaviours" in water, in its submission to a National Energy Board (NEB) panel reviewing the project.

Then in November that year, a peer-reviewed assessment by eight academics of more than 9,000 pieces of scientific literature on oilsands products, marine ecosystems and other topics, published in the journal Frontiers in Ecology and the Environment, was sent to Prime Minister Justin Trudeau.

That assessment, which was sent to the prime minister a week before he gave the green light to the Trans Mountain expansion project, concluded that “there are large unexamined risks to the marine environment from oil sands products” and that it would be “scientifically unfounded” to assume damage from these products can be lessened.

Since then, National Observer has reported that some government officials labelled the assessment wrong and picked apart its conclusions; that high-ranking public servants in the federal government discussed speeding up the review of the project; that federal government sources allege that the process was rigged following Kinder Morgan lobbying; and that the former B.C. government had identified 11 "marine safety gaps" in case of an emergency surrounding the pipeline.

Asked what she is hearing from her departmental scientists on the issue, McKenna responded that the project went through a “full environmental assessment” that examined potential impacts and resulted in the NEB's 157 conditions that the company would have to meet to proceed. These conditions involve impacts on air quality to fish habitat and soil, emergency preparedness, safety and regulatory oversight.

“We made our investments in the Oceans Protection Plan, and this was working with the previous B.C. government, who had expressed some concerns," she said, citing additional tugboats and reopening coastguard stations.

Yesterday, Transport Minister Marc Garneau announced a new set of measures for that plan, including seven new partnerships with Indigenous coastal communities, and $110 million over five years to chart 23 high-priority ports across Canada's coasts to create safer navigation, among other items.

McKenna could not elaborate on any specific conversations she had with scientists on the issue when asked, but she noted environmental assessments go beyond her own department to include the fisheries and natural resources departments. She also said the federal government has been “doing science on oceans health, marine spills — for decades — as well as on diluted bitumen.”

“Specific interactions — I talk to scientists every day. But their role is making sure that we’re making decisions based on robust science, and that’s what we did,” said McKenna.

Last month, the minister proposed a new scientific advisory panel with B.C. to address concerns about Trans Mountain expansion’s environmental risks. She made the proposal in a letter to B.C. Environment Minister George Heyman.

“I took the extraordinary step of writing a letter to Minister Heyman,” said McKenna, “because I felt during the consultations they were not being clear about the science that exists, and the science that has been already done.”

She said she had not heard yet from Heyman on the next steps for that panel.

“As we said, we’re happy to do more science. We made the decision based on science. Going forward, on broader ocean health and marine science, we’re happy to continue working with the government of British Columbia,” said McKenna.

Even if dilbit behaved like conventional crude, a pipeline spill into a river or lake on which communities depend for water would still render it undrinkable, and a tanker spill would still be disastrous.
Canadians are still waiting for McKenna to produce the numbers showing that oilsands expansion is compatible with Canada's climate targets.
Absurd, of course. Which is why we'll never see the numbers.

Indeed. When was the last

Indeed. When was the last time spill "cleanup" efforts actually cleaned up a major spill to any signficant degree? When they say "world class" spill response, they mean "miserable failure".

A strong voice from the past

A strong voice from the past we should we listening to rather than this syrupy Liberal nonsense: https://canadianviews-ymo.ca/rachel-carson-versus-a-besieged-rachel-notley/

Oh Wow! An extra 110 million...OVER 5 YEARS....on top of the 1.5 billion, OVER FIVE YEARS...to protect, if I understand it correctly, all our oceans and great lakes!!!!! Pretty generous when you consider they've offered KM and their lobbyists 5...or was it 6 billion to make the project risk free..FOR KINDERMORGAN.

What troubles me is not the science....we know what the report sent to the Liberals a few short months ago said. That was the science.

What troubles me is the passivity of so many Canadians....and their seeming stupidity. 1.5 billion for the oceans...6 billion for a Texas company that emerged out of Enron...because a couple of those rats were smart enough to bail before the ship sank.....

A lie a lie is a whopper....shameful from a minister who should know what we are facing from CO2 caused climate change. There's no science to it.

"I talk to scientists every

"I talk to scientists every day"
"the project went through a full environmental assessment"
"we have great scientists in our department"
BUT NO EVIDENCE PRODUCED!

Yes, well, she said she

Yes, well, she said she TALKED to scientists every day. She never said she LISTENED to them.

I've been hearing of the

I've been hearing of the option of using rail to transport bitumen, WITHOUT the diluent. Why is this not discussed everywhere? Seems perfectly safe. Even if a train goes off the rails, the stuff is almost solid (ie, tar).

Whatever the way or the type

Whatever the way or the type of oil that is carried by a pipeline, a train or a truck, what matters is that we have to produce less of all kind of fossil fuels. Crude oil production from the Alberta bitumen oil sands is already one of the largest contributor to Canada's greenhouse gas emissions (if Alberta was a country, its per capita production of greenhouse gases, at around 65 tonnes/capita, would be higher than the vast majority of other oil producing countries in the world).
One of the major problem with crude oil production in the Alberta bitumen oil sands comes from the tremendous amount of toxic residues filling gigantic tailing ponds that will cost billions of dollars and many years to clean up. The other major problem comes from the exportation and consumption of Canadian crude oil, here and in other countries, that is polluting the atmosphere and contributing to climate change.
Oil has brought us economic prosperity, but the negative effects of its production and consumption now largely surpassed its benefits.

One nice thing about rail is

One nice thing about rail is that it's multipurpose. Build a pipeline, moving fossil fuels is about all it's good for. So you've got this powerful incentive to keep moving the bad goop once you build the thing; switch away and you lose your investment. I dunno, maybe you could switch it to maple syrup.
But rail is an efficient transporter of everything, and fairly easy to transition to electric power. We will have uses for rail transport long after the last drop of crude is pumped or gobbet of tar is steamed out of the dirt. So transporting tar by rail does not lock you into tar production the same way a pipeline does.

The science of global warming

The science of global warming dictates that there should be no new fossil-fuel infrastructure built, and that existing be wound down.

McKenna keeps talking about "more science". Where is this "science"? What are facts? What are the conclusions? What are they basing it on? How do their "science" explain the peer-reviewed assessment by eight academics of more than 9,000 pieces of scientific literature on oilsands products, marine ecosystems and other topics, published in the journal Frontiers in Ecology and the Environment, that was sent to Prime Minister Justin Trudeau??

This woman should be given an

This woman should be given an honorary doctorate in the Flat Earth society to go along with her current role as High Priestess of pseudo science in the Petro State that is Canada.

Specifically how does McKenna

Please book a date, National Observer, to interview Minister McKenn on her understanding and concerns related to the IPCC report, Summary for Policymakers. Shouldn't be too much to ask that she has read and understood the ramifications of this brief document, prepared especially for people like her, and available online to the global population.

Please let's hear some specifics about the science.

Canadians should demand that our government ministers have some type of relevant knowledge regarding their portfolios. Economics and political science education clearly do not qualify an individual to weigh and understand science - though I'm happy to be disproved, once Minister McKenna has been interviewed on her understanding of what the science predicts for the impact of her government's policies of expanding fossil fuel extraction, for her three children and for mine. If Minister McKenna can't understand and appreciate the science, she should be willing to consult with scientists who do. There is no science in the world that supports expansion of pipelines at this critical time in history.

Trudeau's government is coming down on the wrong side of history and their legacy will be the destruction of the planet they are handing on to our children.

Her department produced a

Her department produced a report “Potential Pacific Coast Oil Ports” in 1978. Its conclusion was that the east end of Burrard Inlet, where the Kinder Morgan tanker terminal was and is, was the worst place to put an oil port.