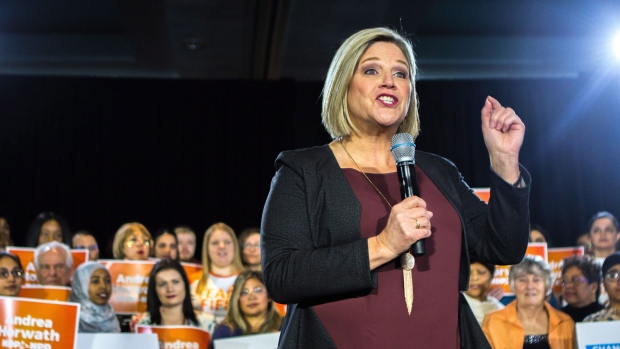 For months, a​mong political pollsters and insiders, there's been quite the buzz around Ontario NDP leader Andrea Horwath’s chances in this election. Now, with two weeks to go, three polls in a row have showed the Ontario NDP pulling even with the Progressive Conservatives.

Perhaps more importantly, the trend lines in the polling are heading in the NDP’s direction. It looks like some of that is coming from voters who are now second-guessing their support for the PCs, as well as from voters that are defecting from the Liberals.

Horwath’s NDP has the momentum, and momentum is a tricky thing to shift.

Voters started to write off the Liberals months ago with the “time for a change” number reaching some 80 per cent. The PCs, which seemed such a sure thing for so many months, have tried to run a classic Conservative “in the lead” campaign. No doubt focused on their ground game, they have discovered their leader is lacklustre and so far unable to address concerns about ethics and the party's lack of a platform.

These factors have combined to give Horwath the opening she needed to shift “time for a change” to “change for the better.” While the NDP campaign has experienced some bumps, Horwath has remain calm, poised, and on message throughout. Ontario does not have to choose between bad and worse, she’s told voters. And voters seem to be listening.

So, what’s next? Well, with two weeks to go, here’s what I’m expecting.

Both the PCs and the Liberals have started to ramp up the attacks on the NDP as it’s become clear the Dippers are surging. There’s nothing new here, of course. These are the kind of attacks on the NDP that are so trite they’ve practically become clichés.

The PCs calling the NDP “radical.” Liberals pointing to the budget mistake as “proof” the NDP isn’t ready to govern or can’t manage a budget. They have already dusted off the attacks on the Rae government, and more is sure to come.

The problem the PCs and the Liberals have is there’s nothing scary about Horwath. The platform is in line with the people of Ontario, who have clearly said they want change. Voters are looking for solutions to problems like housing, affordability, and health care; all well within the NDP’s wheelhouse. If ending hallway medicine is radical, than I suspect many Ontario voters will be fine with that.

Both the PCs and the Liberals have started to ramp up the attacks on the NDP as it’s become clear the Dippers are surging. #onpoli

Even the costing mistake in the NDP’s platform is a gift in somewhat sloppy disguise. Horwath rightly apologized and fixed it, but it also became a second chance for the media and the public to remember the fiscal problems the Wynne government has, and the lack of any real budget or plan from Ford.

The attacks will continue to the end of the campaign. A big part of if, or how, the NDP continues to succeed will depend on how they react, and not over-react, to the increased scrutiny. Horwath and her team can’t let it throw them off, and so far, so good. Continue to parry lightly, and push past the attacks. Joke them off where possible, and keep focused on talking about why Horwath is the best chance for change Ontario has.

Prepare for the Bay Street Broadside

The other parties likely won’t be the only ones engaging in NDP fear mongering. As much as I think it will likely backfire in this very populist moment, I still expect some folks on Bay Street won’t be able to resist inserting themselves in the campaign.

The NDP needs to be ready for some form of corporate Canada to come forward and publicly plead with the people to keep the socialists out. This will be dressed up in economic doomsaying about Horwath’s plans to raise corporate taxation, and/or to bring Ontario Hydro back into public control. Investment will flee! Ontario will be closed for business! Thousands will be laid off! This tactic is as old as the party itself, and I look forward to what kind of scary Horwath photoshop our friends at the Toronto Sun are preparing for their endgame front page.

Handled properly, this can be of net benefit to Horwath. She can use it to highlight how Ford’s tax plan will overwhelmingly benefit the bankers and lawyers in downtown Toronto, a group of “elites” he continues to feign disdain for. Like in Alberta in 2015, where these tactics were tried on now Premier Notley in the closing days of the campaign, people aren’t in the mood for a bunch of fat cats telling them what to do. This kind of attack can provide a great opportunity for Horwath to show a little populism and reinforce that she is the real champion of working folks.

We usually don’t see much in the media about the ballot question until just before election day, but the truth is most campaigns are thinking about it and how to get the one they want months before that. Generally, what you want front of mind for voters when they have the ballot in front of them – the question that will make your party the most likely choice – is considered while you are preparing everything from the theme and key promises to the campaign slogan.

In this case, Horwath started the campaign with two important messages.

First, she stated clearly on day one she is running to be premier. While it may seem obvious that a party leader has their eyes on the top job, this is not in the DNA of all New Democrats. In stating it so directly, Horwath was signalling to the public and the media that she was in it to win it, and should be treated as such.

Second was her recognition that this was a change election, and her offer directly to Ontario voters that she is ready and able to be the kind of change they are looking for. This helped to shift the normalized A-B story line preferred by Liberals when they’re running from behind. The dodge ball ad the party launched in the week before the campaign was a funny way to illustrate this, and helped set the tone for what came next.

Those two important framing ideas for the campaign helped create the conditions for voters to take a serious look at the Horwath New Democrats, and it’s clear she’s got their attention.

The task down the stretch is to continue to chip away at Ford’s credibility as a legitimate force for positive change, and close the deal as the natural alternative. The new “Can’t Afford Ford” web page launched by the party this week is a good signal of the direction of the endgame messaging.

It’s time for Horwath and the NDP to double down on the narrative they started with. In the noise of increasing attacks, this will require a continuation of the kind of discipline we have seen from the candidate: reinforcing that Ontario doesn’t have only one choice to replace Wynne, but that in fact they have a second, better choice in Horwath. Expect the last debate on Sunday to be a key moment where Horwath presents her ballot question directly to voters.

While this communications strategy is important (and my area of expertise, so my focus), a growing campaign with momentum needs to increasingly shift resources to its top priority: the ground game.

By the end of the last debate on Sunday, barring any last minute surprises, the communications battle should reach its peak. In the last week or so, it’s about not making mistakes, reinforcing momentum with rallies and other efforts to get the vote out, and preparing your team for election day. I’ve often talked to my communications teams about “staying out of the way” of organizing efforts in the final days so that the campaign can focus on delivering the support to the polls.

From what I’m hearing, and seeing, something is really happening with the NDP campaign in Ontario. And it’s not just showing up in the polling. Volunteers are showing up by the dozens. New people are turning up at leader’s events. Fundraising is up, and — my favourite metric — local campaigns are running out of signs. If people keep working hard, and the leader keeps her focus and poise, New Democrats might be in for quite a night on June 7.

They've got an interesting

They've got an interesting road ahead. If Western Canadian history is any indication, the NDP absolutely needs to win a majority to move forward.

When did journalists start

When did journalists start calling the NDP "Dippers" ? I have never heard it before and it seems derogatory to me.