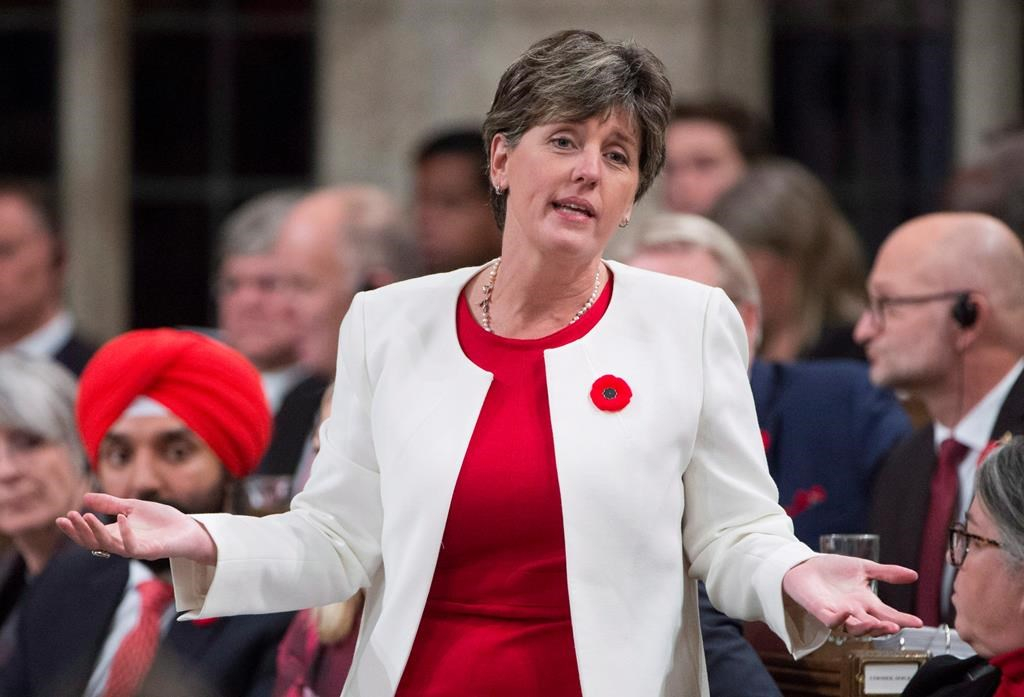 International Development Minister Marie-Claude Bibeau responds to a question during question period in the House of Commons in Ottawa on October 30, 2017. File photo by The Canadian Press/Adrian Wyld
Previous story
Next story

When G7 finance and international development ministers convene in British Columbia next week, Canada hopes the meetings will generate fresh ideas on how aid money can be leveraged to entice the private sector to boost investments in poorer parts of the world.

The challenging search for solutions will take place in Whistler, where finance and international development ministers will gather together for the first time at formal G7 meetings.

Many countries, including G7 members like the United States and the United Kingdom, have been working for some time to lure more private capital into developing nations as a way to help make up for inadequate levels of foreign aid.

Canada has been a late bloomer in this area. Earlier this year, it became the last G7 country to create a development finance institution to operate alongside its government-run foreign aid program.

Marie-Claude Bibeau, the federal international development minister, says the hunt for new ways to get more private investment cash into developing countries will be a key part of the talks in Whistler.

As this year's G7 host, Bibeau says Canada will also put female empowerment at the centre of the development discussions — with new approaches that will take into consideration the full life cycle of girls, adolescents and women.

Whatever Canada announces on development, she added, will be in line with the Trudeau government's feminist policy.

But Bibeau stressed that without innovative ideas, the international community will fall well short of its overall targets on eradicating poverty.

Investments from donor countries around the world will have to be between $5 and $7 trillion in order to achieve the planet's sustainable development goals by 2030, she said.

Total funding last year was around $147 billion, she added.

"We have to go from billions to trillions, so we know that if we only count on those donor countries, such as Canada and the G7 countries, we will never end poverty," Bibeau told The Canadian Press in an interview.

"So, we really have to think differently and bring new partners on board."

Bibeau said many options will be on the table in Whistler. She declined to get into specifics, but added that solutions could involve new ways of removing financial hazards for the private sector in riskier parts of the world.

Canada sees the G7 as an important setting to come up with new ideas because of the large role it plays in development.

The G7 discussions will also focus on trying to get the private sector interested in investing in women's businesses in developing countries — and Bibeau said there will be an emphasis on adolescent girls.

For Bibeau, giving adolescent girls in these countries the chance to improve their education, health and nutrition will be a big part of the effort.

"We believe that this is the best way to end poverty — but if we want to have empowered women, we have to give girls the opportunity to develop their full potential," said Bibeau, who has invited girls from developing countries and Canadian indigenous communities to address the ministers directly.

However, some argue it won't be easy to convince companies to put more of their money into developing countries.

Liam Swiss, a development expert at Memorial University in St. John's, N.L., said it's important and admirable for governments to encourage private sector investors to get involved.

But companies' main goals will remain focused on where they can make money, he said.

"They're profit driven, so you can have good corporate social responsibility, but at the end of the day, the things that matter most is what their shareholders can yield in profits," said Swiss, who is unsure what new tools could be proposed to attract private investors.

"In terms of new and innovative ways to bring that about, I'm a bit at a loss in terms of what the G7 could offer to firms to encourage their partnership and their investments in these ways that hasn't been tried before."

Critics of this approach, Swiss added, warn about potential abuses by private-sector firms in communities and of individuals — and the possibility the poorest people won't see economic benefits.

Others are more optimistic about what the G7 meetings might come up with.

Megan O'Donnell of the One Campaign, an anti-poverty group co-founded by U2 singer Bono, said efforts by come countries have been "extraordinarily successful" so far in attracting private investment dollars to developing countries.

The key question, she said, is whether we know that there have been positive impacts for the poorest people.

"There has been some interesting work to suggest that that is the case, but I think a lot more can certainly be done to continue to build that evidence," said O'Donnell, the One Campaign's policy manager on gender issues.

Looking ahead, she believes giving more economic empowerment to women — as entrepreneurs, for example — will be a win-win because they can also help investors' bottom lines, once the financial risks have been eliminated.

"It might not be intuitive for them at the start to recognize, 'Hey, this is really a profit-seeking opportunity for us,'" she said of companies.

"But with removing some of those risks, then all of a sudden the private sector is increasingly incentivized."