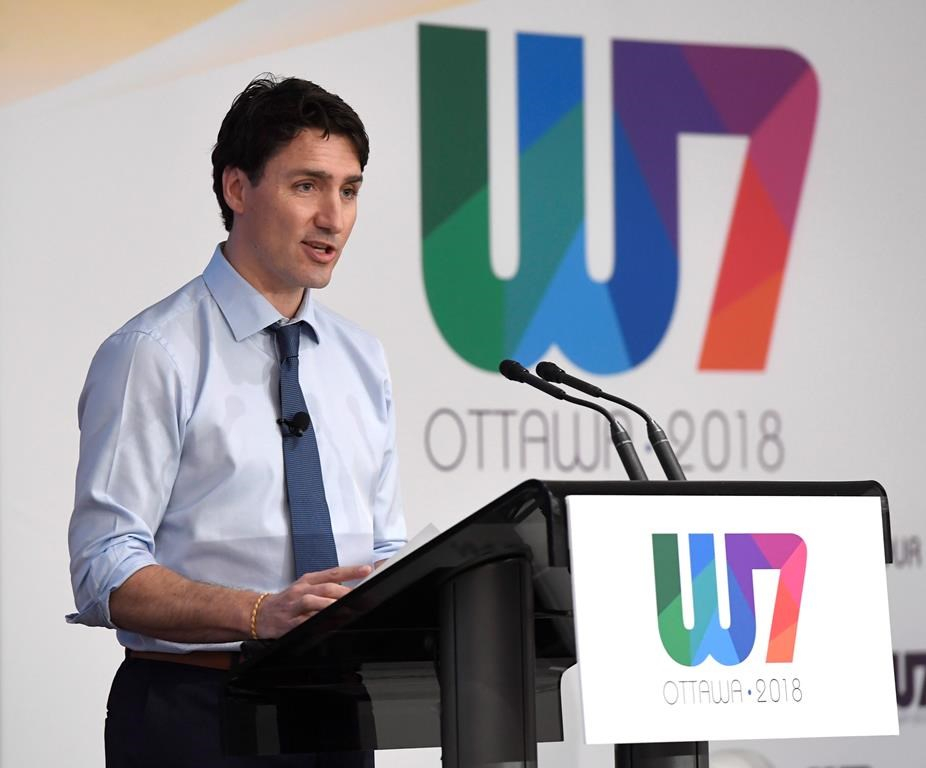 Prime Minister Justin Trudeau delivers remarks at the W7: Feminist Visions for the G7 meeting in Ottawa on Wednesday, April 25, 2018. Photo by The Canadian Press/Justin Tang
Previous story
Next story

Justin Trudeau is being lampooned in a new video by the anti-poverty organization led by his friend and U2 frontman Bono for not having a concrete plan to advance his feminist agenda at the G7.

The one-minute video by the One Campaign, which is to be released today, pokes fun at the prime minister, citing his many photo-ops, his "cool socks" and even dressing up as Superman for Halloween.

"We like your style, prime minister, like how you play with pandas, photobomb a prom pic, dress up as Superman or show off your cool socks," intones the voiceover, accompanied by various still photos of Trudeau in the aforementioned scenarios.

"You talk a good talk, prime minister. But where's your plan?"

The video says Trudeau's time is running out, with the Charlevoix G7 leaders' summit on the horizon on June 8.

"You've made gender equality and women's empowerment a theme but so far, those are just words," it says. "Now it's time to act. Show the G7 leaders the way."

Stuart Hickox, One's Canada director, said the decision to "poke" Trudeau wasn't taken lightly. But One and other organizations are worried that Trudeau's gender agenda will fail because his government isn't coming up with a firm plan that he can sell to his fellow G7 leaders in time for their meeting.

"It's a missed opportunity if we get through the G7 with a just mere declaration or more framing language or more aspiration," Hickox said in an interview.

The group presented Trudeau with its own finished plan in December to advance women's economic empowerment that included leveraging the private sector for support, and that had a firm price tag, said Hickox.

"This is a fully costed, specific policy approach … that leverages private capital, that engages civil society, and that can be a legacy."

Jamie Drummond, the entrepreneur who co-founded One with Bono, met with Trudeau, Finance Minister Bill Morneau and the teenaged Nobel Peace Prize winner Malala Yousafzai at the World Economic Forum in Davos, Switzerland in January to sell the plan.

Also in attendance were several high-level business leaders who had been tapped by One to help finance their multi-year, multibillion-dollar plan, said Hickox.

Other non-governmental organizations have given the government similar plans,he added, but all it seems to want to do is "talk," which includes this week's meeting of 'W7' summit of dozens of female activists to hash out a plan for the G7.

"We all want the prime minister to succeed — that's the thing. This kind of poking, gently, at him and his government is not done lightly," said Hickox.

"We worked really hard, as well as other sector organizations, to put some legs under this aspirational language to make it real with specific ideas."

Bono has heaped praise on Trudeau in the past, most recently for his modest increase in foreign aid. He also agreed to make a guest appearance at Canada 150 celebrations on Parliament Hill last July 1.

"I don't speak for Bono, but he has said before we applaud the government for your leadership. We pat you on the back when you do the right thing. But we're also ready to push," said Hickox.

Hickox said One is an activist organization that tries to end extreme poverty by providing options for government, and that's what it is trying to do with Trudeau so he can "own the space that he has claimed for himself."

"So this is a moment of pushing."