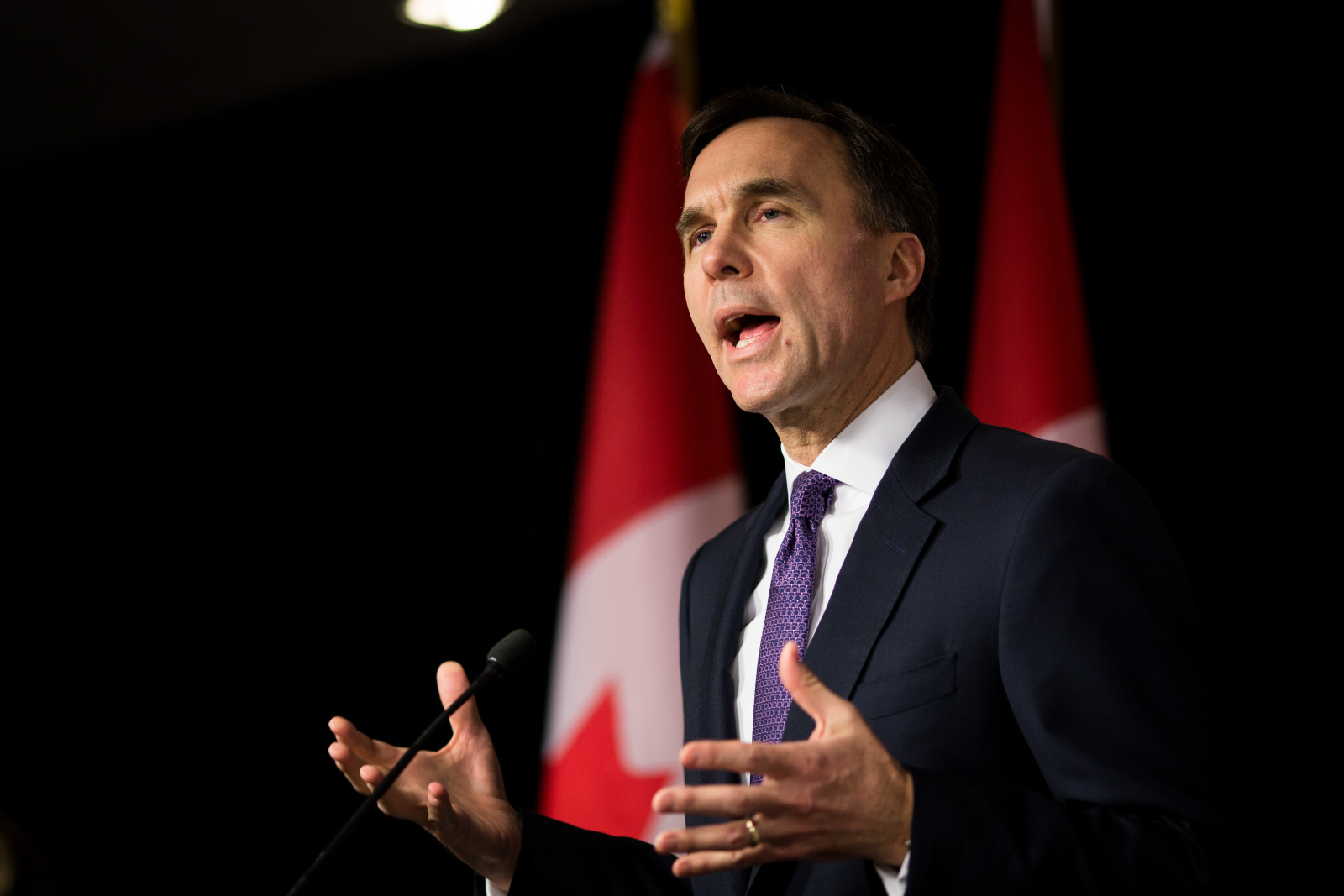 Speculation is mounting in Ottawa that the Trudeau government is poised to take over the embattled Trans Mountain pipeline project after its Texas-based proponent, Kinder Morgan, cancelled a federal construction permit application needed to pursue the oil pipeline and tanker expansion.

The Vancouver Fraser Port Authority confirmed in a May 14 email, obtained by National Observer, that the company had withdrawn an application to build a temporary construction barge on the West Coast that would have been needed to pursue the project.

"The applicant for the above-noted proposed project has advised us that they are no longer planning on pursuing this proposal and requested that their permit application be withdrawn/cancelled," said an official from the federal agency in a May 14 email sent to the Tsleil-Waututh Nation in the Burrard Inlet of B.C. "Our review of the proposed project is therefore cancelled."

The application is among more than 1,000 permits needed for Trans Mountain to proceed with construction on the project, which aims to triple the capacity of its existing system to transport up to 890,000 barrels of diluted bitumen and other petroleum products per day from Alberta. The withdrawn application could mean the company would be forced to wait up to 60 business days to proceed with construction plans, if it decides to reapply for that construction barge permit, according to the federal agency's approval process.

"This application was going through detailed review when it was cancelled," said Danielle Jang, a spokeswoman for the port authority in an email to National Observer. "In terms of how long it would take to re-apply, that would be up to the proponent to decide when they want to re-submit."

Some other permits have been approved or are under review, but the company has declined to respond to repeated requests for comment about the abandoned permit application.

The revelations about the permit come as multiple media reports speculated that the Trudeau government was on the verge of buying the controversial project that has prompted fierce opposition in British Columbia and Quebec, due to concerns about climate change and spills on the west coast.

The Canadian Press reported on Monday evening that there were three options on the table, which include the government buying and building the expansion, then selling it once it's complete; and buying it on an interim basis, then selling it to investors and leaving them to handle the construction.

The federal cabinet has been summoned to a meeting Tuesday morning — two hours earlier than usual — after which Morneau will discuss which of the three options the government has decided on.

A spokesman for Morneau declined to comment on the reports from multiple media outlets that the government was poised to takeover the project.

Kinder Morgan gave Ottawa until Thursday to convince it to proceed with the pipeline's construction — enough time to settle down jittery investors who feared a court challenge from the B.C. government would make the project too great a liability.

Prime Minister Justin Trudeau has put a lot of political capital on the project, pledging over and over again that the pipeline expansion is in national interest and will be built one way or another.

Since the government has declared the project to be in the national interest, it has financial tools available to it to buy into the project, similar to when the former government bailed out General Motors and Chrysler during the financial crisis in 2008 and 2009.

Trudeau said Canada loses $15 billion a year because oil cannot be exported anywhere but the United States, adding that the Trans Mountain expansion opens up the option of exporting to Asian markets.

He also said Canada's environmental protections for oceans and its climate change policies hinge on Canada being able to sell its natural resources even as the country begins to transition to cleaner sources of energy.

Trudeau dispatched Morneau to negotiate a deal with Kinder Morgan in mid-April, a week after the company halted all non-essential spending on the $7.4-billion pipeline pending reassurances from Ottawa that opposition to the project was not going to prevent it from being completed.

That decision came as B.C. Premier John Horgan was working on a court challenge to seek judicial guidance on whether provinces can restrict what flows through pipelines for environmental reasons. The court challenge was filed about two weeks later.

Provinces have jurisdiction over the environment, but the Constitution gives Canada the authority over interprovincial transportation, including pipelines.

Horgan contends Canada has jurisdiction to build the pipeline but that he can regulate what flows into his province within it. His concerns largely stem from the limited science available on how diluted bitumen behaves if it is spilled, and the risk that comes from increasing the amount of it being shipped on tankers out of Kinder Morgan's marine terminal in Burnaby, B.C.

Several First Nations have also challenged the project in court, arguing that the Trudeau government failed in its legal duty to consult them, since it had allegedly made up its mind to approve the project before engaging in consultations. This federal obligation is spelled out under Section 35 of the Canadian Constitution.

The Tsleil-Waututh Nation has also asked the Federal Court of Appeal to reopen the evidentiary record on its court challenge, six months after the hearings concluded, to review new evidence that the process may have been rigged. The nation's motion was based on evidence uncovered by National Observer, through interviews with public servants and documents released through access to information legislation.

Trudeau argues the project went through a rigorous and expanded approval process that included additional consultation with Indigenous communities, and examined new environmental risks, such as the increased emissions that stem from producing oil to fill the pipeline.

Trudeau would not tip his hand Monday on the state of talks with Kinder Morgan, but reiterated his government's constant refrain that the project is absolutely going to be built.

"We continue to engage in financial discussions on the way we are going to do that," Trudeau said.

After Morneau went public with the option to cover new cost burdens on May 17, Kinder Morgan CEO Steve Kean said the company and the government were not yet "in alignment," and the negotiations would not take place in public.

Construction has begun on some of the modifications for the company's marine terminal in Burnaby, where Trans Mountain's oil is loaded onto tankers for export. The pipeline itself has been awaiting final route approvals, and construction permits. The May 31 deadline was set with construction season limitations in mind.

The company has already spent about $1 billion on the project to date, and if construction started on time this summer, completion was scheduled for December 2020. The proposal is to run the pipeline parallel to the existing one that runs between Edmonton and Burnaby to increase capacity almost three fold.

Tim McMillan, president of the Canadian Association of Pipeline Producers, said what happens this week is "huge, not just for our industry or this pipeline, but I think for Canada."

McMillan said if a pipeline that meets a high regulatory standard, has all the approvals, support from a majority of Canadians and the backing of the federal government cannot get built, it sends a chilling signal that Canada is not open for business.

"It's essential we see a smooth transition to construction at this point," he said.

— with files from Mia Rabson, The Canadian Press

Editor's note: This article was updated at 11:11 p.m. on May 28, 2018 with additional details about Trans Mountain permits and background about the federal government's approval of the pipeline expansion project.

This is not good; not good at

This is not good; not good at all. What's Trudeau's plan? Build it and try to sell it for pennies on the dollar?

Canadians deserve a lot better than that, especially with the amount of tax money involved. And then there's the overall questionability of the project, with oil spills on the land and in the water. With pipelines, it's not matter of if they leek; it's a matter of when and where they leak. Everybody knows that. Kinder Morgan just has a big spill last week; not an encouraging sign.