Scientists are planning an oily bitumen spill in this Ontario lake 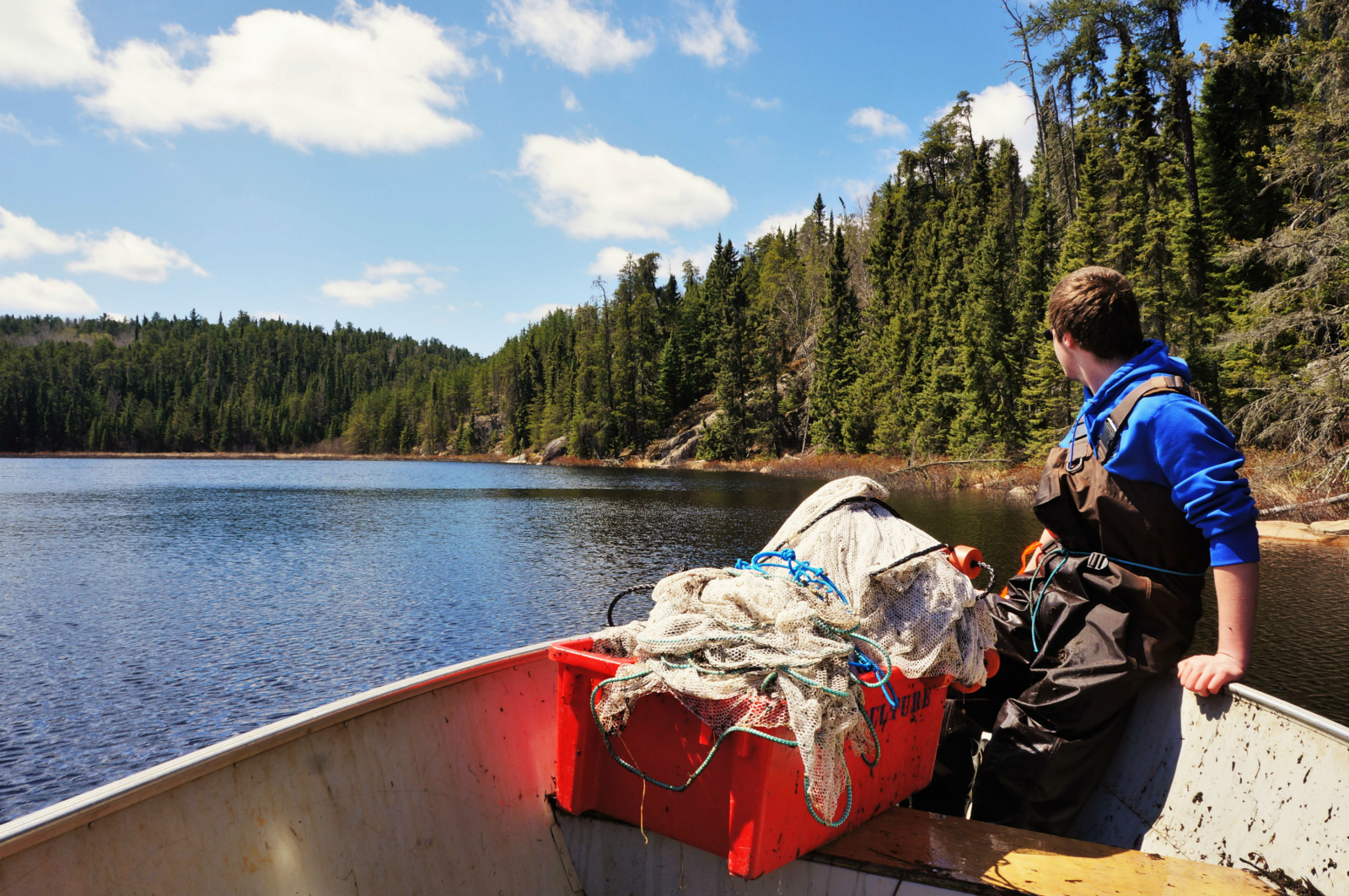 A student research assistant peers over one of the Experimental Lake Area's famous lakes in northwestern Ontario with a seine net in hand in 2017. Photo courtesy of the IISD-ELA
Previous story
Next story

Researchers in northwestern Ontario are counting down the days until they can hop in a boat with a bucket of diluted bitumen, and pour it into a freshwater lake.

No, it's not a mistake. Later this spring, scientists at the International Institute for Sustainable Development (IISD) are scheduled to intentionally spill crude oil into a lake near Kenora, a small city roughly three hours east of Winnipeg. The lake is one of dozens at the IISD-Experimental Lakes Area, a world-renowned freshwater research facility.

It’s part of a controlled experiment, explained IISD's head researcher Vince Palace, to study how diluted bitumen behaves in a freshwater environment and how best to clean it up. Oil behaviour, recovery and cleanup is an emerging area of science that is critical in the political debate in British Columbia over Kinder Morgan's Trans Mountain pipeline and oil tanker expansion project.

Don't worry, Palace added. The 'spill' will involve only a small quantity of oil, and will take place in a contained portion of the lake that has first, second, third and fourth containment measures in place, with backup barriers downstream in the unlikely event of any failures.

“We would never conceive of doing anything with the whole lake,” Palace told National Observer in a phone interview.

The experiment, called Boreal, doesn't involve the same volume of oil as an actual spill, but will model how diluted bitumen would interact with a freshwater environment should it cascade from a truck, train or pipeline. By isolating columns of the lake using underwater corrals and curtains, scientists will create a contained "mini-ecosystem" in which they can study the oil's impacts on sediment, fish, bugs, and microbes in the water.

Bitumen, a crude oil from Alberta’s oilsands, is thick and heavy like molasses when at room temperature. It’s thinned with natural gas condensates to create a product know as 'dilbit' that is easier to ship through pipelines.

The substance is at the heart of controversy over Kinder Morgan's Trans Mountain expansion project, which would triple the capacity of an existing pipeline system to 890,000 barrels of bitumen and other petroleum products daily from Alberta to the B.C. coast. There's some scientific debate over dilbit's behaviour in the open ocean on such issues as how long it floats before it sinks; how water temperature or sunlight could change that; and how long it takes before the oil is no longer a threat to the environment.

These knowledge gaps have fueled doubt in claims by both Trans Mountain, and the federal government which approved the pipeline, that they can mitigate the risks of an ocean oil spill. Earlier this year, B.C. Premier John Horgan announced new regulations to block dilbit shipments from the West Coast until an advisory panel can examine the “scientific uncertainties” around the oil’s interactions with water and marine wildlife.

Environment and Climate Change Minister Catherine McKenna told National Observer in a recent interview that she believed there was enough "good science" available on the behaviour of bitumen in water to justify moving forward with the project.

Testing dilbit on the shorelines

While the Boreal experiment will take place in a freshwater, it may help address some of the questions around a dilbit spill response. The project will be carried out in tandem with a sister experiment called Forest — Fresh Water Oil Spill Remediation Study — aimed at shedding light on best practices for cleaning dilbit from shorelines.

Forest, which is conducted in partnership with IISD, the federal government, local First Nations and industry partners, will test and and analyze the effectiveness of various cleaning products and methods on the shores of the lake over time. For this experiment, researchers will use small amounts of "weathered" dilbit that have had some of their toxic compounds removed, in an effort to replicate a real spill.

"We'll put it onto the shoreline and wait four days," said Palace. "That’s about the time it often takes for spill responders to get to a site and remediate, so we’re modeling that."

There will be four enclosures in total, two with dilbit and two with conventional heavy crude oil, so researchers can compare them. After the four days, teams will remove as much oil as possible from the lake's shoreline, and over the next few years, they'll study the impact of residual dilbit that couldn't be cleaned up.

Questions they hope to answer include how long dilbit remains toxic to the environment, how to remove it, and how spill responders can support the naturally-occurring microbes that munch on oil to clean up any that remains.

Heather Dettman, a Natural Resources Canada scientist and project lead for Forest, said the dual experiments stand to reveal much about the aftermath of fresh and salt water spills.

"(The shoreline's) rocks are made of the same thing whether they're inland or on the coast, so from that perspective, it will be relevant," she said in an interview. "If it’s floating or however it’s getting there, the wave energy is getting it there and putting it on the shore.

Dettman, who has been studying petroleum for 28 years, has been leading federal research on diluted bitumen's in water tanks at a laboratory in Devon, Alta. She can vary "conditions" in the tanks, adding motion and various levels of salinity. The new experiments are "exciting," she said, because they involve conditions that can't be simulated indoors, such as sunlight, winter, rain and wind.

"We have the luxury of analysis of the oil beforehand, and then collecting the perfect sample during and afterwards, so we can really monitor the chemistry that’s happening," she explained. "Because often if you have a spill, it takes a while for things to get set up, to collect samples... so you're missing the initial data on what's happening during that time period.

"This way, we’re collecting the samples right afterwards so we can have that full time course of the evolution of the spill. That’s the novel stuff."

Dettman and Palace agreed there is much to be learned about diluted bitumen and freshwater lakes, whose microbes aren't regularly exposed to the stuff — unlike streams and soil in Fort McMurray, near the oilsands, for example.

Researchers on the Boreal project will be testing to see how long it takes each of dilbit's compounds to dissolve in freshwater and how quickly bacteria breaks down the oil. Palace, a fish biologist, will be working with teams of biology students to examine subtle effects on fish, including any impacts on reproduction, behaviour and metabolism. He'll also dig into whether the accumulation of toxic compounds in fish can be increased by exposure to sunlight. This could be a problem for any fish whose body is transparent enough that light will penetrate it through the water.

For Forest, Dettman and her team will work from the Alberta lab, analyzing samples of sediment, plants and other items from the shoreline, to see the impact from the oil and cleaning products. Both experiments involve between 25 and 30 researchers from IISD, universities, federal departments and other organizations. Rigorous sampling will take place one hour in, two hours in, four hours in, eight hours in, 24 hours in, 48 hours in, and at increasingly large intervals afterward.

The budget for Forest of between $4 and $4.5 million is covered by the federal government, a variety of academic and scientific grants, and industry partners at the Canadian Association of Petroleum Producers and the Canadian Energy Pipeline Association.

A special place to spill the oil

Both Boreal and Forest have been two years in the making, a testament to "how seriously" the researchers take safety and scientific integrity at the IISD-Experimental Lakes Area (IISD-ELA), said Palace. The IISD-ELA is a "natural laboratory" of 58 small lakes and their watersheds in northwestern Ontario, where the experiments will take place.

The IISD-ELA, which functions as a research charity, is celebrating its 50th anniversary this year. It has previously conducted groundbreaking research on acid rain, water pollution and the impact of mercury on fish populations.

For years, the world-renowned facility was managed and funded — with more than $2 million per year — by the federal Fisheries and Oceans Department. But the facility was forced to transfer its ownership over to the IISD following cuts imposed by the former Harper government in 2012.

The Trudeau government reinjected $1.7 million in funding for the facility over two years in its 2016 budget.

It's the only place in the world, added Palace, that has special legislation at the provincial and federal level that allows researchers to intentionally introduce contaminants like dilbit — on condition that they return the ecosystems to their original health. Conducting oil spill research at the IISD-ELA is an exceptional scientific opportunity, he explained, because it produces much more data than a real-life spill.

"You never know where an oil spill is going occur and you never know when," he said. "If you knew that, we could go in before the oil spill and we could collect all the information on what’s there already, and then we would know exactly what the impacts of the spill are.

"Oftentimes, we just don’t have baseline information, so it’s very difficult to decide how clean is clean, when are we done here, and when are we not having an impact."

By contrast, at the IISD-ELA, researchers have a 50-year database on every detail of the ecosystem, from the zooplankton to the algae; from the benthic invertebrates to the fish populations. That means that if something disturbs the lake — diluted bitumen, in this case — the teams will know exactly what has changed and gone wrong. The age of the database also means the team can examine climate change impacts, said Palace.

Boots are on the ground for the anticipated oil drop, originally scheduled for June 1, 2018, but later postponed. University students are extracting bug and plankton samples, filling sandbags for containment, and assembling the infrastructure for the experiments.

Editor's note: After this article was published, the IISD-ELA told National Observer that it had postponed the date of the beginning of its bitumen experiment, originally scheduled for June 1, 2018. National Observer has also updated the photo captions, to reflect new information from IISD-ELA. The article was updated at 10:15 a.m. ET on May 24, 2018, and 2:37 p.m. ET on May 28, 2018 to reflect these changes.

How Canadians are plotting bug slaughter to protect freshwater

Dump it in the Ottawa River

Dump it in the Ottawa River behind Parliament if you want to see how easy it is to clean up.

"Experiments" have already taken place in the river running through Lac Megantic, Quebec, after the horrific dilbit-fracked oil explosion in that town that also saw pollution of the river. A quick check of newspaper articles in English Canada but moreso in the Montreal daily Le Devoir will reveal that years after this disaster the river is still showing pollution on the river-bed and causing deformation of fish.
If required I can point to some of these articles.
John Darling, Toronto 416-928-3086