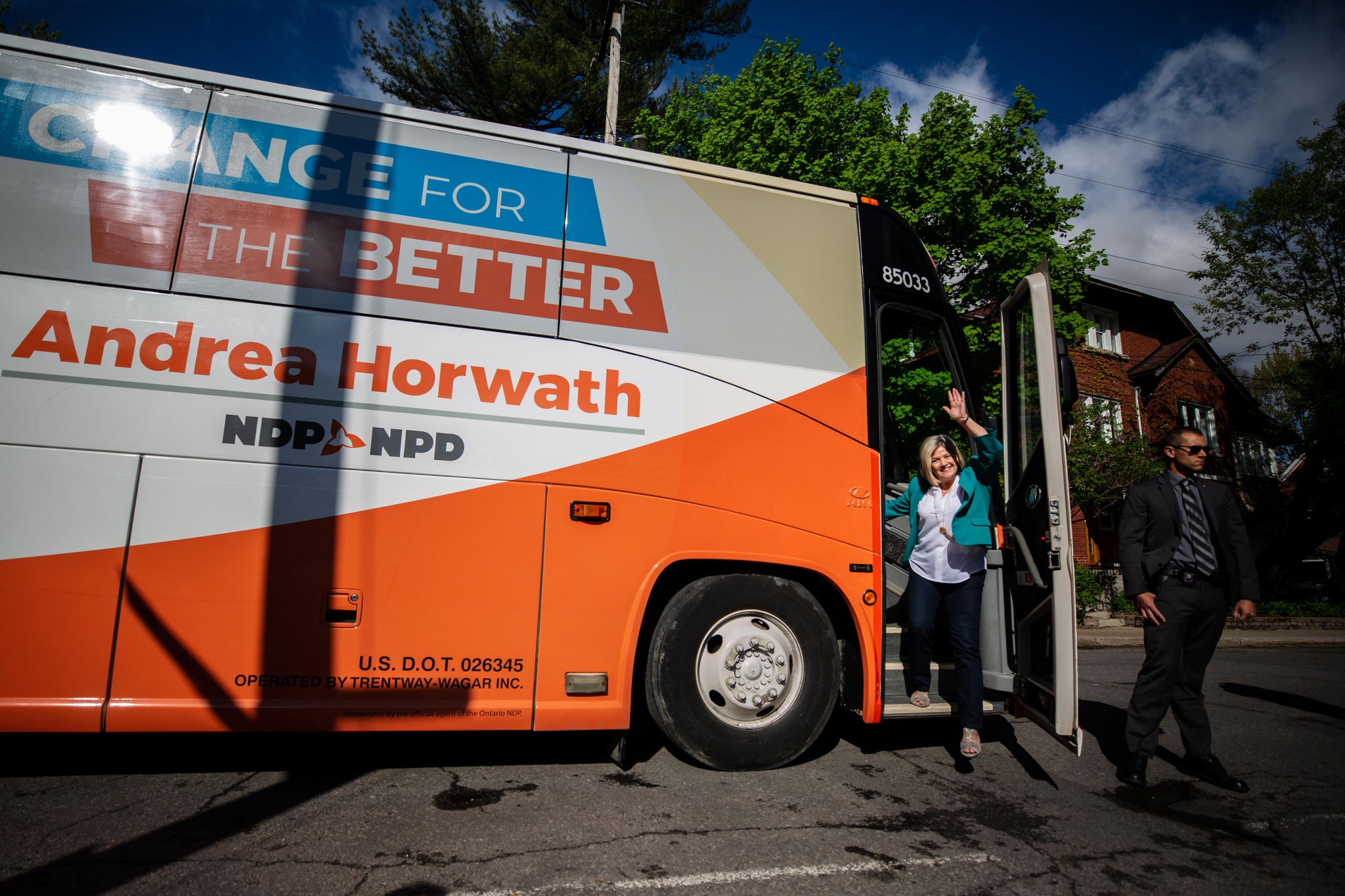 Ontario NDP Leader Andrea Horwath steps off her campaign bus in Ottawa on May 20, 2018. Horwath is campaigning on a promise to keep the Ontario Liberals' cap and trade carbon pricing system in place, but redirect some revenues. Photo by Alex Tétreault
Previous story
Next story

Jerry Flynn says his Ontario startup is an example of how a price on carbon pollution is powering business opportunity in the province.

Flynn, 32, is a chemical engineer in the business of carbon recycling, taking what was once a waste product — carbon pollution from industrial exhaust fumes — and turning it into valuable, marketable, assets.

His firm, Tandem Technical, breaks down exhaust gases into compounds that can be assembled into ingredients for products like toothpaste or paper. It’s one of many firms around the world vying for a piece of what will become a $1.2-trillion carbon recycling industry by 2030 as the world moves to reduce pollution.

Flynn said his company has benefited from Ontario’s cap and trade system. The system requires large industrial polluters who pump more than 25,000 tonnes of pollution in the air every year (the equivalent of driving 5,000 cars) to buy credits as permission to keep polluting.

“In Ontario, where Tandem is headquartered, we have seen a dramatic shift in demand with cap and trade incentives coming into effect, in terms of companies seeking out our technology,” said Flynn in an interview.

“We are seeing a market pull and increased demand from future customers in industries such as cement manufacturing, power plants and natural gas who are looking for new solutions to lower their carbon pollution and make money doing it."

Ontario goes to the polls on June 7 and the results are sure to affect clean tech startups in the province. That's because all four publicly-funded parties offer different policies when it comes to carbon pricing.

Ontario Premier Kathleen Wynne, whose government launched the cap and trade program in 2017, defended its value in a leaders' debate on Sunday night, saying the Liberals had secured private sector buy-in for the program.

The Ontario NDP under Andrea Horwath, which is currently leading in the polls, would keep Wynne's cap and trade program in place, but redirect a portion of the revenues to rural, northern and low-income communities as a fairness measure, as well as to a new energy retrofit program.

Ontario Green Party leader Mike Schreiner would scrap cap and trade and move to a direct “carbon fee” distributed as a “dividend cheque” to households, saying this system would work better at tackling pollution.

A global market worth $25 billion

Tandem, headquartered in Ottawa, was a semi-finalist in the $20-million Carbon Xprize competition, backed by a group of oilsands energy firms.

Tandem's carbon recycling technology attaches to existing ventilation systems, captures gases including carbon dioxide, and converts them into water soluble compounds. Those are then processed to generate byproducts like calcium sulfate, calcium nitrate, and calcium carbonate.

“What's unique about Tandem's design is that the process uses off-the-shelf components and proven technology — the innovation is in the process itself — so it is low-risk for an industrial partner to adopt the technology,” he said.

Carbon recycling is a burgeoning industry that is supporting new players across the country, like Halifax-based CarbonCure, which takes carbon pollution captured by industrial emitters and injects it into freshly mixed concrete.

Other companies in Ontario are also moving to position themselves at an advantage when it comes to the province’s green policies. Cambridge, Ont.'s VeriForm metal fabrication plant, for instance, cut its natural gas and electricity, saved millions of dollars, grew its workforce and slashed its pollution.

There is also a wave of Ontario clean tech startups, such as Oakville-based plastics recycler Pyrowave and Waterloo-based Smarter Alloys, two of the OCE’s finalists.

They are based on the same premise: Carbon pricing isn’t a drag on the economy, it’s a benefit. Experts say companies that are greener will better thrive in a global marketplace where there's a price on pollution. This new economy is driven by environmental challenges like climate change and accelerating technological change.

On the flip side, there is increased scrutiny by investors and governments of companies that fail to disclose risks related to climate change. National Observer reported April 5 that Canadian regulators are considering a crackdown on companies that don't disclose climate risks, after a probe concluded that nearly half of those investigated were only disclosing "boilerplate" data or nothing at all.

Flynn said he’s observed from talking to representatives of large firms with big carbon footprints, that some of them haven’t learned that with new technologies, they can cut emissions and remain profitable.

“You have all of these industries that are not interested at all in innovation, because what they have is good enough. They do the same thing over and over,” he said.

The provincial Liberal government says it has raised about $2.3 billion in provincial revenue from its carbon auctions, not including its most recent auction in mid-May. That money goes into a green fund that the province must spend on environmental initiatives or on reducing carbon pollution.

Wynne defended her government's system at the May 27 leaders' debate. "One of the reasons we chose cap and trade in this province is that we worked with businesses, and businesses said cap and trade makes sense," said the premier.

That doesn't go far enough, Schreiner has argued. “We should have a price on carbon pollution, period, and we should ramp it up,” the Green Party leader has told National Observer.

Meanwhile, the NDP would put "at least 25 per cent of the revenues" into northern, rural, and low-income Ontario communities, as well as to "assist trade-exposed industries."

It would also allocate $50 million of the revenue to a proposed new home energy-efficiency retrofit program targeted at low-income communities. While she didn't have any issues with cap and trade, Horwath said, "we had hoped that a fairness measure would have been built in."

Ford's position is that carbon pricing does little to further green policies. He has previously called the province's Green Energy Act, which supports renewable energy, a “scam."

“I actually believe in man-made global warming,” he said at the debate. “But what I don’t believe in, my friends, is putting an artificial tax called a carbon tax, cap and trade, that does absolutely nothing to help the environment.”

Editor’s note: Heather Ward, Tandem's co-founder, is a former media commentator and engagement strategist for National Observer. This story was updated at 12:15 a.m. May 29, 2018 to clarify that Tandem is now headquartered in Ottawa.