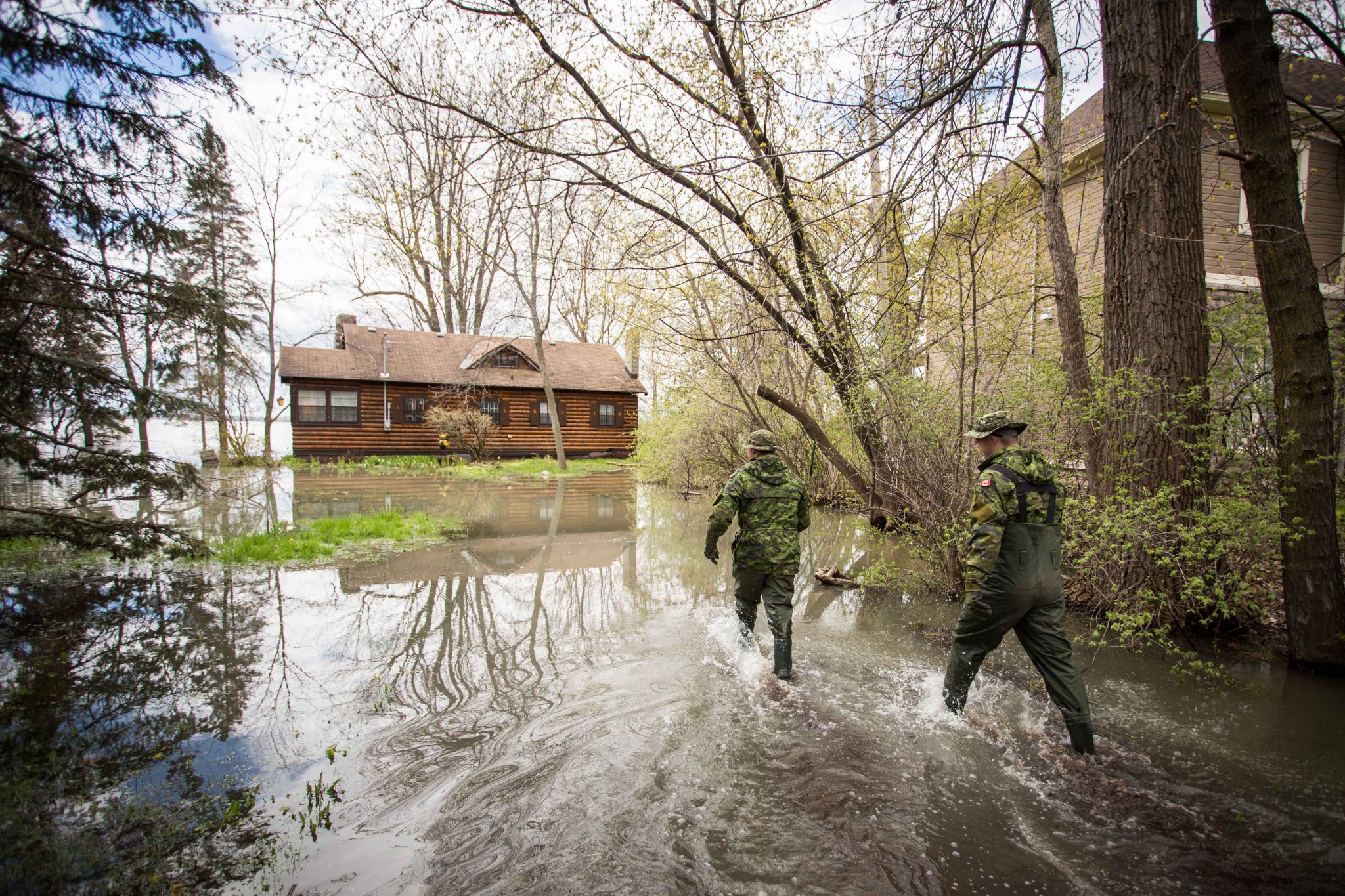 Corporal Jérôme Esculier and Trooper Raphaël Métivier wade through waters from flooding in spring 2017 to check out a house completely surrounded by water. Photo by Alex Tétreault
Previous story
Next story

Canadian regulators are considering a crackdown on companies that fail to disclose climate change-related risks to investors after a probe concluded that nearly half of those investigated were only disclosing "boilerplate" data or nothing at all.

The Canadian Securities Administrators (CSA), which represent securities regulators in each province and territory, wrapped up their year-long investigation Thursday into what kind of information publicly-traded firms have been disclosing to investors about the risks and financial impacts associated with climate change.

“We now have a better understanding of the current state of climate change-related disclosure in Canada,” said CSA chair Louis Morisset, who is president of Quebec's financial regulator. “Moving forward, we will aim to improve the disclosure of risks and related governance and oversight processes.”

It comes on the heels of former U.S. Treasury Secretary Robert Rubin's declaration last month at a Vancouver summit that it was time for companies to disclose financial risks related to climate change, and a lawsuit by New York City against some of the world’s largest fossil fuel firms in order to recover climate costs.

The investigation in Canada revealed that there are “variations in disclosure practices” across industries, and that “substantially all” of investors and other users of securities the CSA examined were “dissatisfied with the current state of climate change-related disclosure, and believe that improvements are needed.”

It found that 22 per cent of the firms it examined in a “targeted review” provided “boilerplate disclosure” and a further 22 per cent provided “no disclosure at all.” The remaining 56 per cent did provide “specific climate change-related disclosure” in regulatory filings, but the investigation also found that the oil and gas industry's performance was better than other sectors.

“Most of the (investors) consulted considered climate change-related risks to be a conventional business issue affecting (firms) in a wide range of industries, and not solely a sustainability or environmental issue,” the CSA report stated.

The securities administrators also found that only 28 per cent of respondents to a voluntary, anonymous survey they conducted indicated they provided climate disclosure in regulatory filings.

Investors are clamouring for more climate disclosure that is “consistent, transparent, comparable and reliable” across industry, as well as more education and guidance on the issue, the report found.

As a result, the CSA has committed to the “consideration of new disclosure requirements regarding corporate governance in relation to risks, including climate change-related risks,” as well as developing new educational initiatives.

The CSA looked at both current and proposed disclosure requirements outside Canada, as well as what kind of disclosure standards are contained in various voluntary climate change frameworks.

Publicly-traded companies are required to disclose risk factors related to the firm and its business that could influence investors’ decisions to purchase their securities.

This information is contained in a firm’s annual information form, which should disclose climate change-related risks, and a “management’s discussion and analysis” form that includes an examination of the recently completed financial year, including risks the firm believes would affect its future performance.

There is an abundance of uncertainty surrounding climate disclosure, the securities administrators found, including what kind of timelines firms need to be looking at, how exactly to measure risks and even whether to label something as “climate change.”

“Based on our consultations, it is apparent that many (firms and investors) share the view that the timing of climate change-related risks and impacts presents a significant challenge,” the report read.

Many investors viewed climate risks as being likely to have a more immediate impact than some firms acknowledge, it added.

As well, in some instances, firms identified climate risks like extreme weather, natural disasters or water access, without specifically referring to the term “climate change.”

It found that there was typically more climate change-related disclosure with larger firms. It also found that disclosure was more common “among issuers in certain industries, notably those in the oil and gas industry.”

Oil and gas was “the only industry” in which a majority of firms indicated they disclose climate risks, it said. Meanwhile, “some issuers in other industries provided significantly less disclosure in respect of the implications of climate change for their business and operations, or no disclosure at all.”

The securities administrators divided up potential climate change-related risks and impacts into four broad categories: physical risks, regulatory risks, reputational risks, and business model risks. For each category, it outlined some impacts, and then drilled down to financial impacts.

Physical climate-related risks could include, for example, changing weather patterns, that could impact health and safety and lead financially to asset write-offs or increased costs. Regulatory risks include changing rules that impact market demand and lead to reduced revenues.

It said regulatory risk was the largest topic discussed in its review of firms. “Few of the issuers we reviewed disclosed their governance and risk management practices respecting climate change," it read.