The federal government's $4.5 billion Kinder Morgan bailout is "a shameful act" when the federal government is not investing $3.2 billion needed to provide clean drinking water for First Nations, Chief Bob Chamberlin said in an impassioned address to a large gathering of protesters in Vancouver Tuesday.

"This is a shameful path for Canada," said Chamberlin, vice president of the Union of B.C. Indian Chiefs, condemning the Trudeau government's decision to spend $4.5 billion in taxpayer funds on Kinder Morgan's Trans Mountain pipeline and its troubled expansion project.

Chief Chamberlin described his village in the Kwikwasut'inuxw Haxwa'mis First Nation, which spent 10 years under a 'do not consume' advisory and only received access to clean drinking water eight years ago.

“Today, the government can magically come up with $4.5 billion for something that Canadians don’t want. For me, the shameful act is that the government of Canada tells First Nations across the country that it doesn't have $3.2 billion for safe drinking water on reserves.” 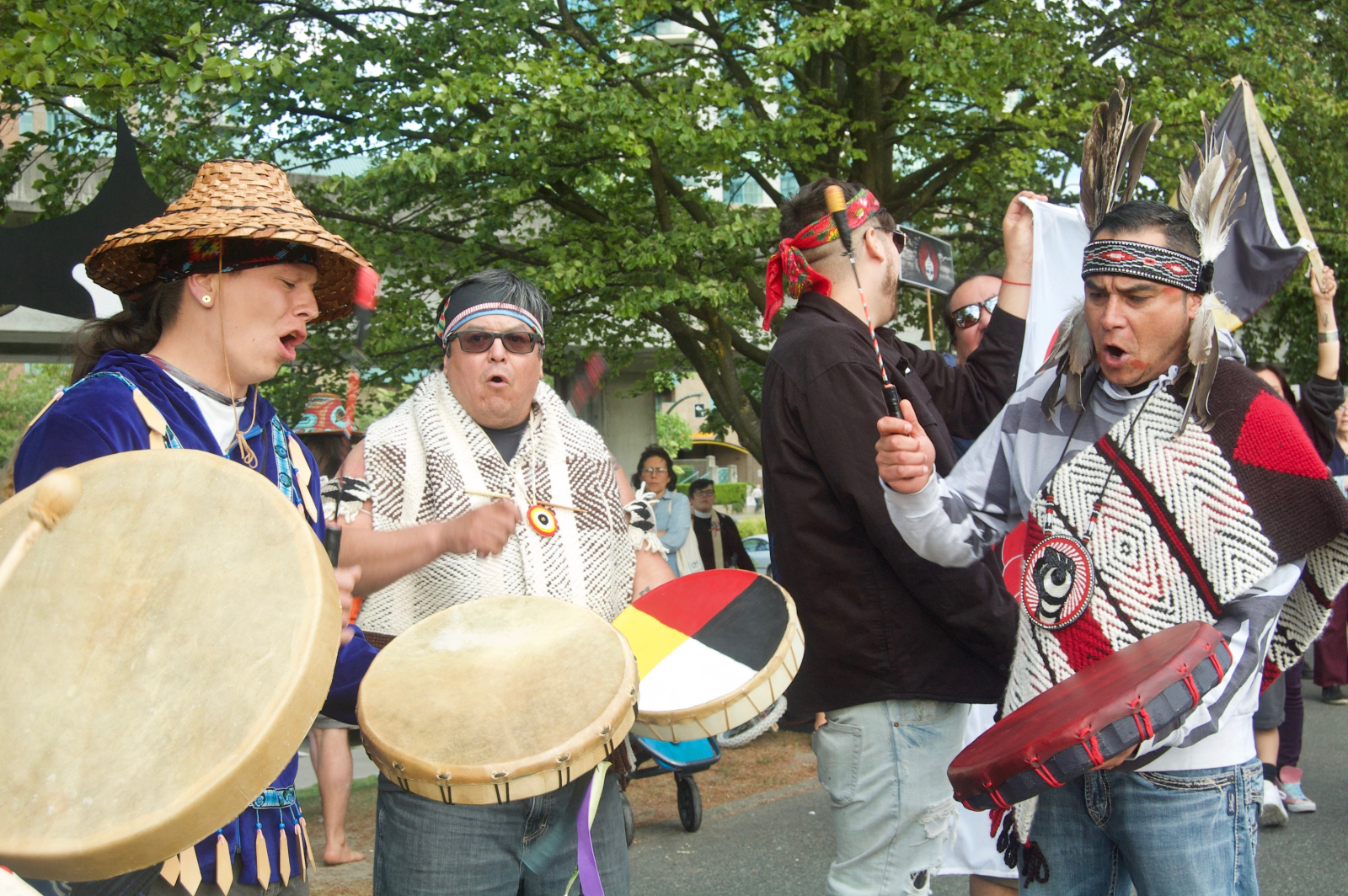 Will George, guardian of the Burnaby Mountain Watch House, constructed in opposition to the pipeline expansion, drums at anti-pipeline rally on May 29 in Vancouver. Photo by Dylan Sunshine Waisman

Carrying banners and signs, more than 1,000 people gathered at a park overlooking the ocean in downtown Vancouver to protest after Finance Minister Bill Morneau's announcement in Ottawa.

The news came just days before a May 31 deadline by the Texas-based company, which was threatening to pull out of the project if it failed to receive assurances that it could clearly build in British Columbia, where the provincial government opposes the expansion, and that shareholders would be adequately protected. Total costs of the Trans Mountain expansion project have been estimated between $15 and $20 billion, including funds for emergency oil spill response.

The project faces several lawsuits, including a joint challenge in the Federal Court of Appeal by six B.C. First Nations, the cities of Vancouver and Burnaby and two environmental organizations - the Living Oceans Society and the Raincoast Conservation Foundation.

So far, more than 200 people have been arrested for crossing an injunction line around the Kinder Morgan Burnaby oil tank farm, while blocking construction access to its main entrance. Arrestees face criminal contempt of court charges, fines ranging from $500 to $4,500, and jail time.

The rally included people of widely varying ages and ethnicities, who came with homemade signs, flags, and pots and pans. Cheering, chants, and applause were passionately persistent throughout the two-hour rally.

Among the event's speakers were elected Indigenous leaders, youth, activists and organizers, and two candidates vying to become Vancouver's next mayor. Speakers shared their personal reasons for fighting the project and some pledged to take action to try to stop the pipeline construction. 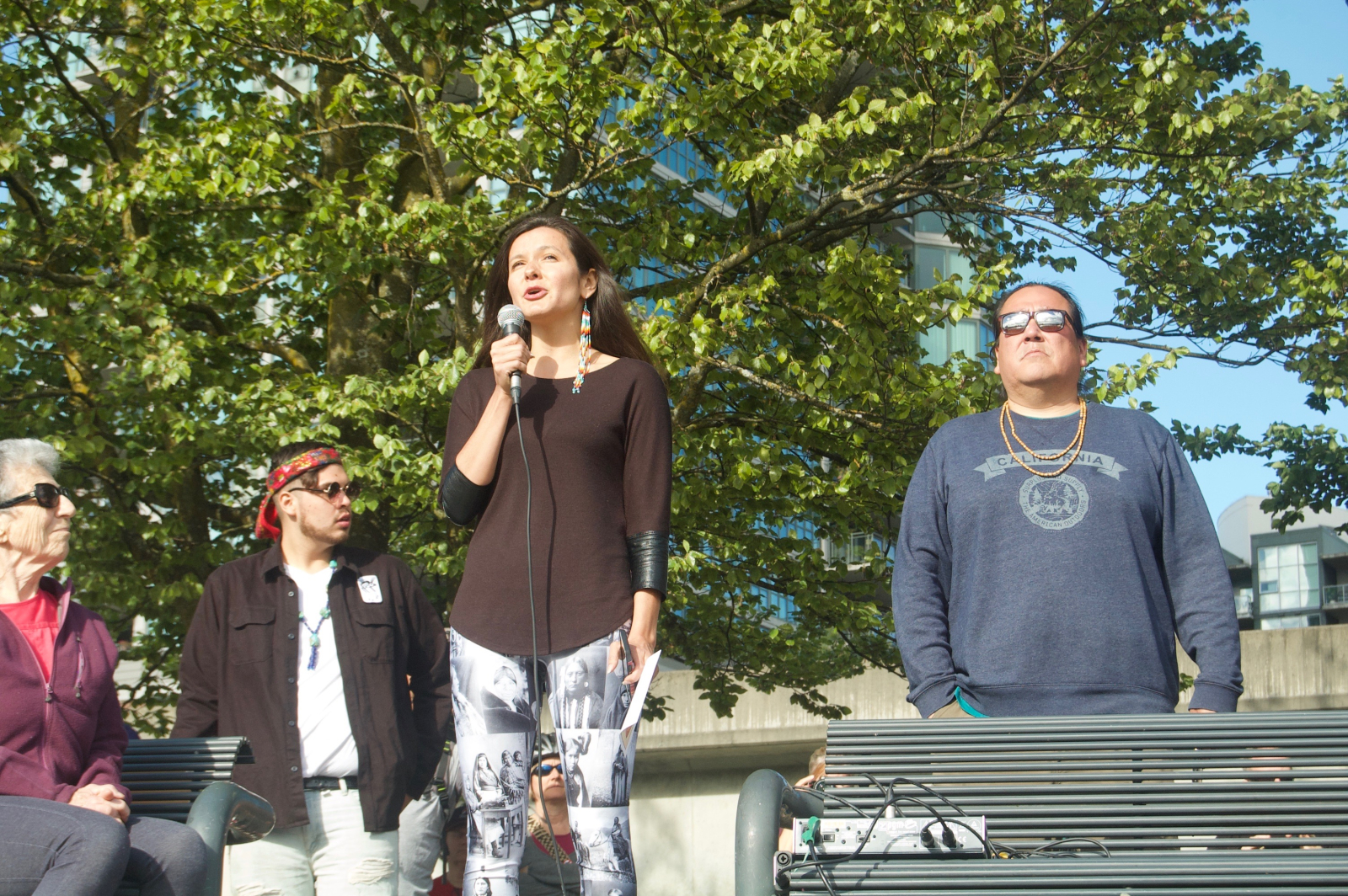 Melina Laboucan Massimo, an Indigenous rights activists and environmentalist from the Lubicon Cree Nation in Alberta, told the crowd about the "devastating" impacts of the oilsands on her nation. Speaking about a 4.5 million litre oil spill on her traditional territory in 2011, which covered three hectares of densely forested area and ponds, Massimo said:

“We can’t drink the water from the streams where the hunters go. We can’t pick medicines and berries — all of the things our people have done for thousands of years, since time immemorial...cultural genocide is what we’re seeing at this point, and it’s not okay.”

Khelsilem, an elected council member for the Squamish First Nation, described the B.C. coast as "our most precious relative" and said Indigenous and non-Indigenous people alike need to protect the coast for future generations.

"We have a sacred obligation — not just Indigenous people — to care for what was given to us by our ancestors, for our next generation....This is the responsibility of every single one of you living on our territory,” he told the audience, to cheers and drumming.

Tzeporah Berman, a prominent environmentalist, spoke about the men and women who have been arrested so far while violating the court injunction at Kinder Morgan's facilities.

"Since March 10, we have watched nurses, doctors, environmental engineers, union leaders, Indigenous leaders, youth and opera singers being arrested on Burnaby Mountain, because they know it's time to stand up," she said.

Berman described the moment as a tipping point for industrial society, as countries around the world shift off fossil fuels in favour of clean energy.

The issue of violating court injunctions came up in Ottawa on Wednesday. Federal NDP Leader Jagmeet Singh refused to condemn peaceful, civil disobedience against the pipeline, saying dissent is part of democracy.

“It’s important to acknowledge that as a democracy we have a rich tradition in dissent...I’m absolutely not condemning it,” Singh said to reporters on Parliament Hill. “I understand that people use non-violent civil disobedience. People use protests as a way to express their frustration and I understand that."

When a reporter pressed him whether he felt it was fine to “trample on injunctions” and “block the project” as long as it was peaceful, Singh responded “absolutely, no question about it.”

“I don’t condone any acts of violence,” he added. “Of course I support the rule of law, and of course — as a lawyer that’s my training — but it’s important to understand that people protest when they’re frustrated.”

Singh said part of the frustration stemmed from a number of First Nations who were feeling betrayed, and others like the Tsleil Waututh who have legal challenges in court.

“We’ve got coastal communities that are concerned and are feeling frustrated and let down. We’ve got people across Canada that are (wondering), why is this government using public resources to pay a private company in this manner?" he said.

"There’s a lot of frustration. People are upset and this does not make sense. I’m going to use my platform to talk about those issues.”

'Kinder Morgan put their tail between their legs'

In Vancouver on Tuesday, Kennedy Stewart, who will end his term as a federal member of Parliament for Burnaby South in June, to run for the mayor's office in Vancouver, gave a fiery speech against the federal government's decision.

Stewart, a longtime critic of Kinder Morgan, was arrested in March alongside Green Party of Canada leader Elizabeth May while protesting the pipeline expansion.

"Kinder Morgan put their tail between their legs and ran back to Texas," he said. "I'm confident, because today, even the Conservatives — (Stephen) Harper's party — stood up and said we should not be putting money into this pipeline," he said. "So the only opponent we have left is Trudeau. I think we can do it, we can stop this pipeline."

Ian Campbell, a Squamish Nation hereditary chief and councilor vying to become Vancouver's first Indigenous mayor, told the audience he believes an economy based on oil was outdated and not suitable for the 21st century.

"You deserve a strong economy, not one based on oil or archaic ways of being," he told the crowd to loud cheers. "We need to move forward with 100 per cent renewable energy."

"Oil and pollution do not discriminate. This is not a First Nations issue, this is a Canadian issue. And its time for us to mature as a society. If I'm elected as mayor, I will commit to being that strong voice for Vancouver against a government that brings willful destruction to our homelands."

Correction: This article was updated at 9:34 PT on May 31 to reflect that Chief Bob Chamberlin spoke of a 'do not consume' water order.
Editor's note: this story was updated at 4:58 p.m. ET on May 30, 2018 to include comments from Singh.