B.C. judge fines Elizabeth May for exploiting role as MP 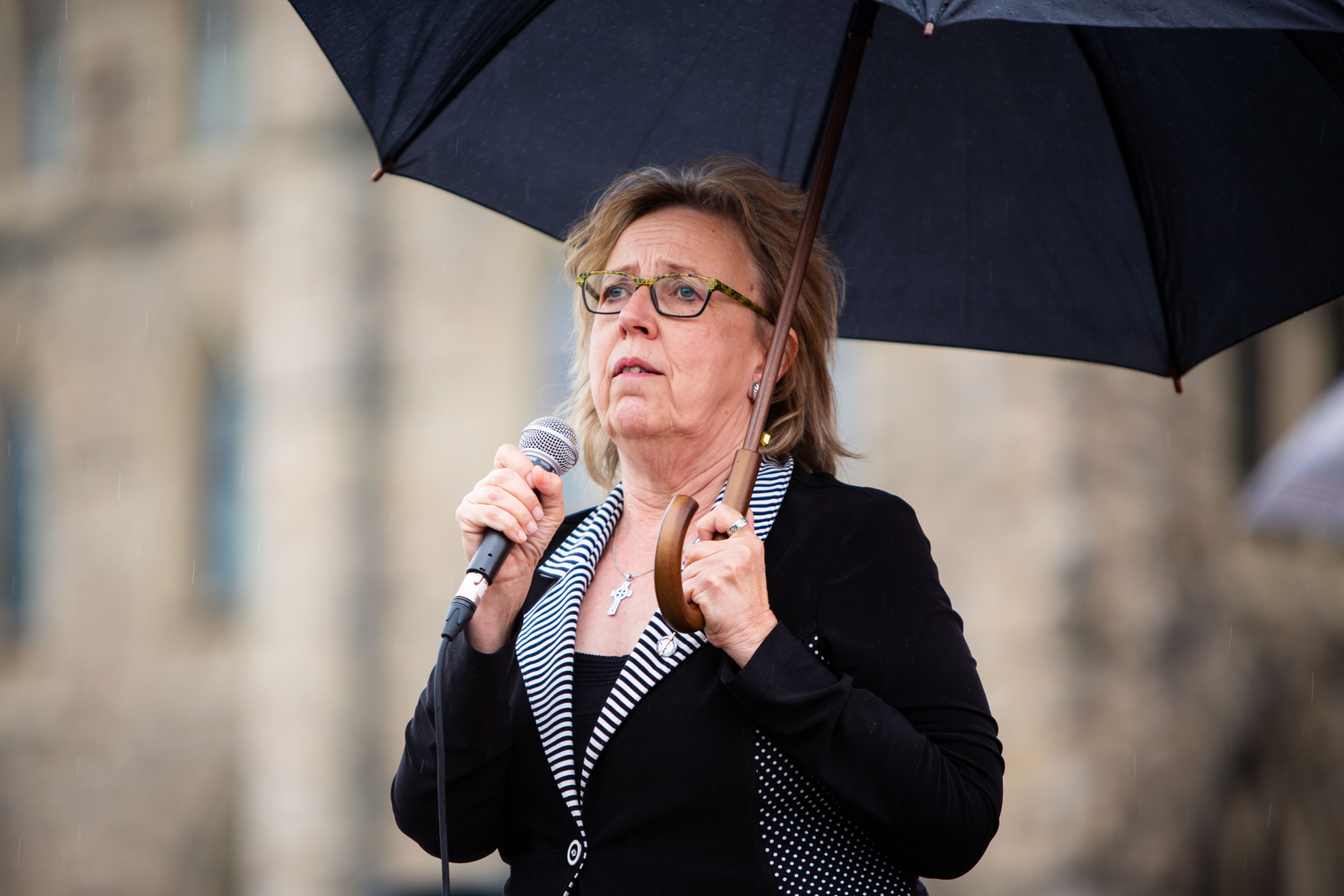 Under the rain, Green Leader Elizabeth May speaks out about the Kinder Morgan Trans Mountain expansion project at a rally on Parliament Hill in Ottawa on May 22, 2018. Photo by Alex Tétreault
Previous story
Next story

Green Party of Canada Leader Elizabeth May has pleaded guilty to violating a court injunction after she was arrested at a Kinder Morgan property in Burnaby, B.C.

May was arrested with several others on March 23, including NDP MP Kennedy Stewart and filmmaker Zack Embree, when she joined protesters to rally against the expansion of the Trans Mountain pipeline system.

On Monday, B.C. Supreme Court Justice Kenneth Affleck ordered May to pay a $1,500 fine, triple the $500 penalty imposed on Stewart, who also pleaded guilty, earlier in May.

Elizabeth May speaks to reporters outside the B.C. Supreme Court on May 28, 2018. Facebook video by Dylan Sunshine Waisman

Justice Affleck says Elizabeth May 'exploited' her role as MP

The hefty fine also was higher than the $500 penalty requested jointly by both the Crown and defence attorneys, Greg DelBigio and Casey Leggett, in the case.

Affleck acknowledged his decision to reject that request was "unusual," but he said that May had a responsibility as an MP and as a lawyer to obey the injunction.

"We can easily look to other places in the world to see where the rule of law has never existed or has been lost, and the dire consequences in the daily news," Affleck told the court. "The law applies to everyone. No one can pick and choose the law because they believe they have a higher obligation."

He also said that May had "exploited her role as member of Parliament and party leader" while encouraging others to defy the injunction.

"With privilege comes responsibility and Ms. May had the responsibility to obey this injunction and persuade others to do so," Affleck said. "Her punishment for criminal contempt must be greater than that of persons who do not hold positions of authority and influence. I cannot accept a fine of $500 as recommended by the Crown and defence. It is unusual for judges to depart from joint submissions, but in this case I conclude that it is appropriate to do so."

Speaking to reporters later, May said that she respected the rule of law, but was defending her own principles.

"Sometimes laws are broken in order to gain greater societal change," May said, following her plea.

Earlier in the day, Crown prosecutor Trevor Shaw opened the hearing by proposing an escalating series of penalties for those who defy the injunction, including jail time.

After June 25, Shaw proposed that people who choose to go to trial could face up to 14 days in jail if they are found guilty.

The latest court developments come with only days remaining before Kinder Morgan's self-imposed May 31 deadline to save the project. The Texas energy company has said it would walk away from the Trans Mountain expansion if it is not able to resolve uncertainty, before the deadline, caused by opposition in B.C. and a threat by the provincial government to use all tools available to protect its coasts, rivers and lakes from spills.

May blamed Kinder Morgan for triggering the conflict.

"They set this up," May said. "They kidnapped their own project. As kidnappers, they've taken their own project hostage. They've made the Government of Canada jump through hoops. They forced something I never thought I'd see: the finance minister (Bill Morneau) saying we're prepared to underwrite a project that takes fossil fuels to other countries — violating the Liberal Party election platform." 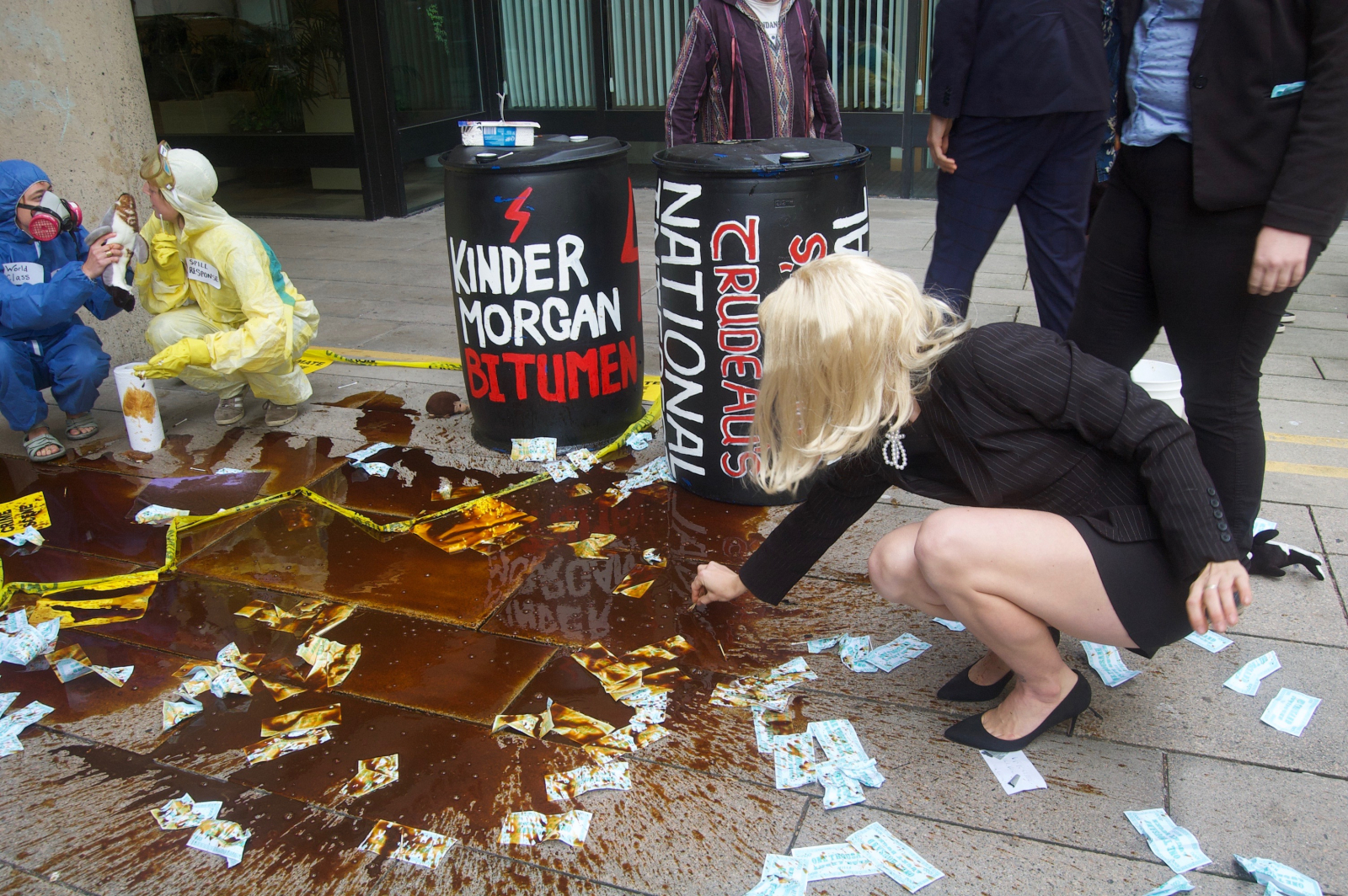 Protesters stage an 'oil spill' before the hearing

Before Monday’s hearing, Kinder Morgan opponents staged a demonstration to voice their opposition to efforts by Prime Minister Justin Trudeau and Alberta Premier Rachel Notley to push through the pipeline expansion.

Three of them, dressed as Trudeau, Notley and company founder Richard Kinder, dumped a mixture of molasses from a steel barrel onto the sidewalk outside the courthouse to simulate an oil spill. The three activists then proceeded to throw fake money on the spill before using some Q-Tips and paper towels to clean it up.

The organizers said they staged this event to remind arrestees and their supporters of the risks the pipeline poses, and why they're in court.

Ooookaaaayyyy . . . so if that's the judge's real reasoning, why did the other MP not get nailed for triple?
Another question--can you be contemptuous of a judge without being in contempt of court? 'Cause the way this guy's been carrying on the emotions he evokes in me sure don't involve respect.

Civil disobedience should NOT

Civil disobedience should NOT be punished in a democracy. By definition, a democracy will accept a citizen's legal right to disagree. So I guess that Justice Affleck should be considered fascist for his refusal to let citizen's exercise their democratic rights.

This is like Daniel Berrigan and the Catonsville 9 who burned draft cards in 1968 and pleaded guilty of this crime in relation to those who were guilty of massive war crimes. Justice is inverted in this case with Elizabeth May as well. There is no justice in this travesty called the rule of law in this case - creating an "injunction" that prevents non-violent protest and criminalizes dissent against a Corporation who will not be affected by the depredations of the environment which the protesters are sanely attempting to protect. Focusing on the prominence of this politically known person and tripling the fine, shows how fearful the powers that be are..... They can more easily dismiss ordinary people and keep them under control with fines and threats... which is why everything escalates.... But the heart of the law and of justice are lost to cold calculations and money.... the whole system has become inverted and no longer represents truth or justice.... And to top it all, Kinder Morgan is being promised Billions of tax-payer dollars in a buy-out of the pipeline project.... This is utter insanity.