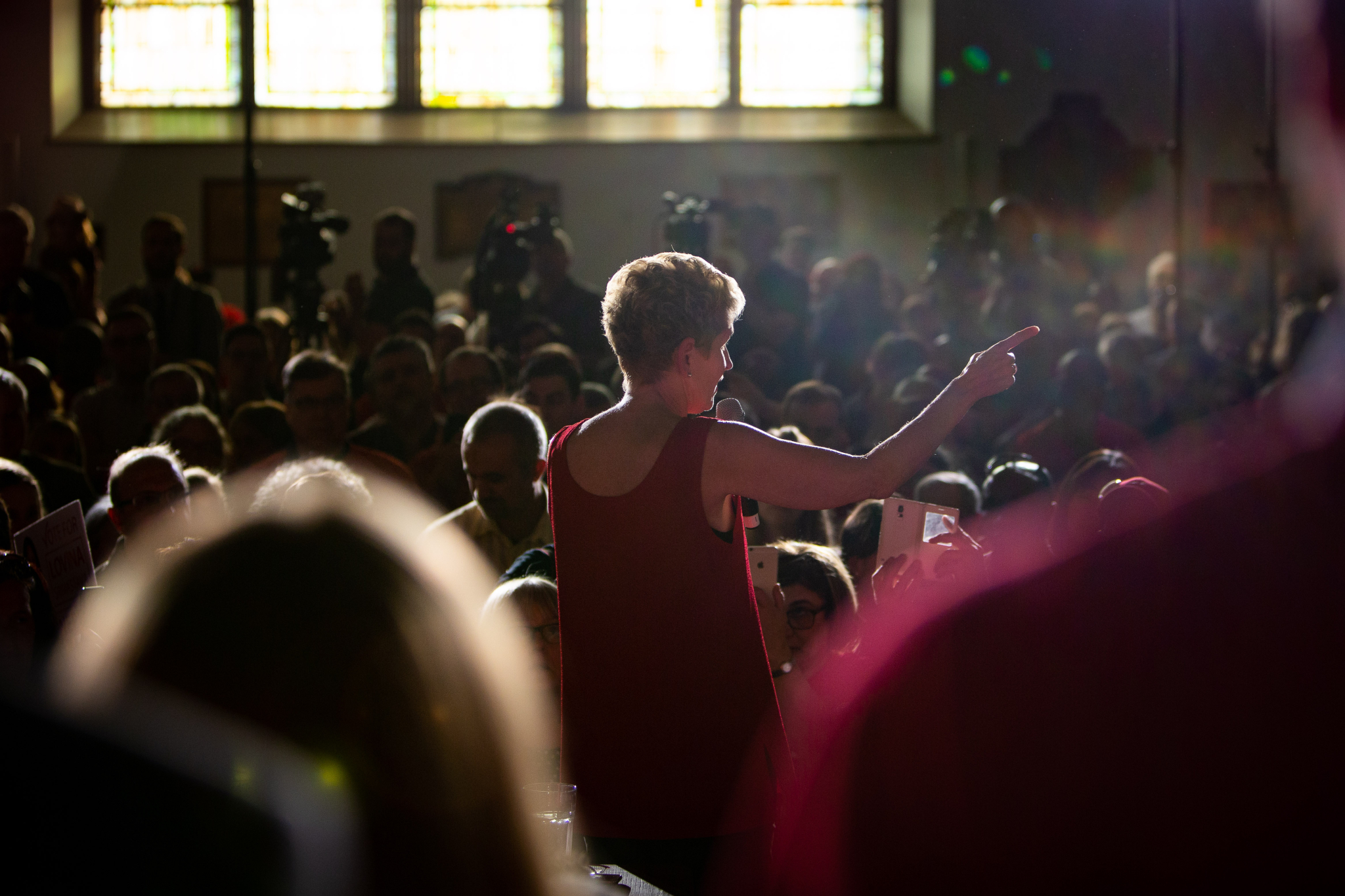 Ontario Premier Kathleen Wynne speaks at a campaign rally in Ottawa on May 9, 2018. File photo by Alex Tétreault
Previous story
Next story

Ontario Premier Kathleen Wynne on Saturday conceded she would lose her job running the province in the June 7 election but urged voters to back Liberal Party candidates to ensure neither the Progressive Conservative’s Doug Ford nor NDP’s Andrea Horwath win a majority.

“After Thursday, I will no longer be Ontario’s Premier,” an emotional Wynne said at a campaign event at a school yard in Toronto. “And I’m okay with that.”

Polls have consistently showed Wynne and the ruling Liberals trailing far behind both Ford — who started the campaign as the frontrunner — and Horwath, who has since caught up to the former Toronto city councillor to make it a tight two-horse race.

“People want change but, by and large, they are confident about where Ontario stands and where Ontario’s headed,” she added. “For this reason, many voters are worried about handing a blank cheque to either Doug Ford or the NDP.”

She said voters don’t trust the judgement of Ford, who has not released a fully costed policy platform.

“This is a man who was only too happy to open up the Greenbelt to condo development until he was caught out,” she said. “Who mused about selling cannabis in corner stores — where our kids shop. This is a man who has promised to cut $40 billion out of government services and pretends it can be done without costing a single job or harming our hospitals or our schools.”

When it came to the NDP — she didn’t refer to Horwath by name — she said voters worry about the economic damage they could inflict by raising taxes on small businesses and stifle job growth while not using legislation to break up strikes.

“After Thursday, I will no longer be Ontario’s Premier,” @Kathleen_Wynne said at a campaign event in Toronto. “And I’m okay with that.”

It was a message that was quickly rejected by the NDP’s Horwath, who warned that voting Liberal would not lead to a minority government but to a majority for Doug Ford.

While polls put the PCs and NDP at roughly the same level of support, the way that support is distributed across ridings means most still forecast a PC victory.

“Kathleen Wynne has abandoned the fight against Doug Ford cuts,” Horwath said in an emailed statement in response to Wynne’s message. “And her request today for a minority government is a demand that she be allowed to continue to hold the power at Queen’s Park – something voters have already rejected.”

“We can’t afford Ford’s deep cuts, mass layoffs and privatizing sell-offs to pay for tax cuts for the rich. We can’t afford to wait longer for health care, and pay more for the basics like transit. And we can’t afford to send our children to even more crowded schools with even fewer teachers."

Surrounded by candidates, Ontario Progressive Conservative Leader Doug Ford glances at a teleprompter as he takes questions from reporters at a tightly-scripted news conference in Ottawa on June 2, 2018. Facebook video

Ford was asked three times for his response to Wynne’s statement, and only repeated his talking points at a news conference in Ottawa, with a bunch of Tory candidates sitting around him.

“This election is about change,” he said, repeating promises to cut hydro rates, income tax and the price of gasoline, and staring occasionally at a teleprompter. “We’re ready to govern, we’re ready to hit the ground running.”

Ford also said he wasn't taking anything for granted during the short session with reporters that lasted about 10 minutes.

None of the candidates commented on Wynne's statement either. Lisa McLeod, who as the incumbent representative for Nepean-Carleton is the only Tory sitting MPP in the Ottawa region, left the event through a back door and hopped into the driver's seat of her vehicle, declining to answer a question about Wynne:

"I don't know," she said, noting that there had just been a question and answer session earlier.