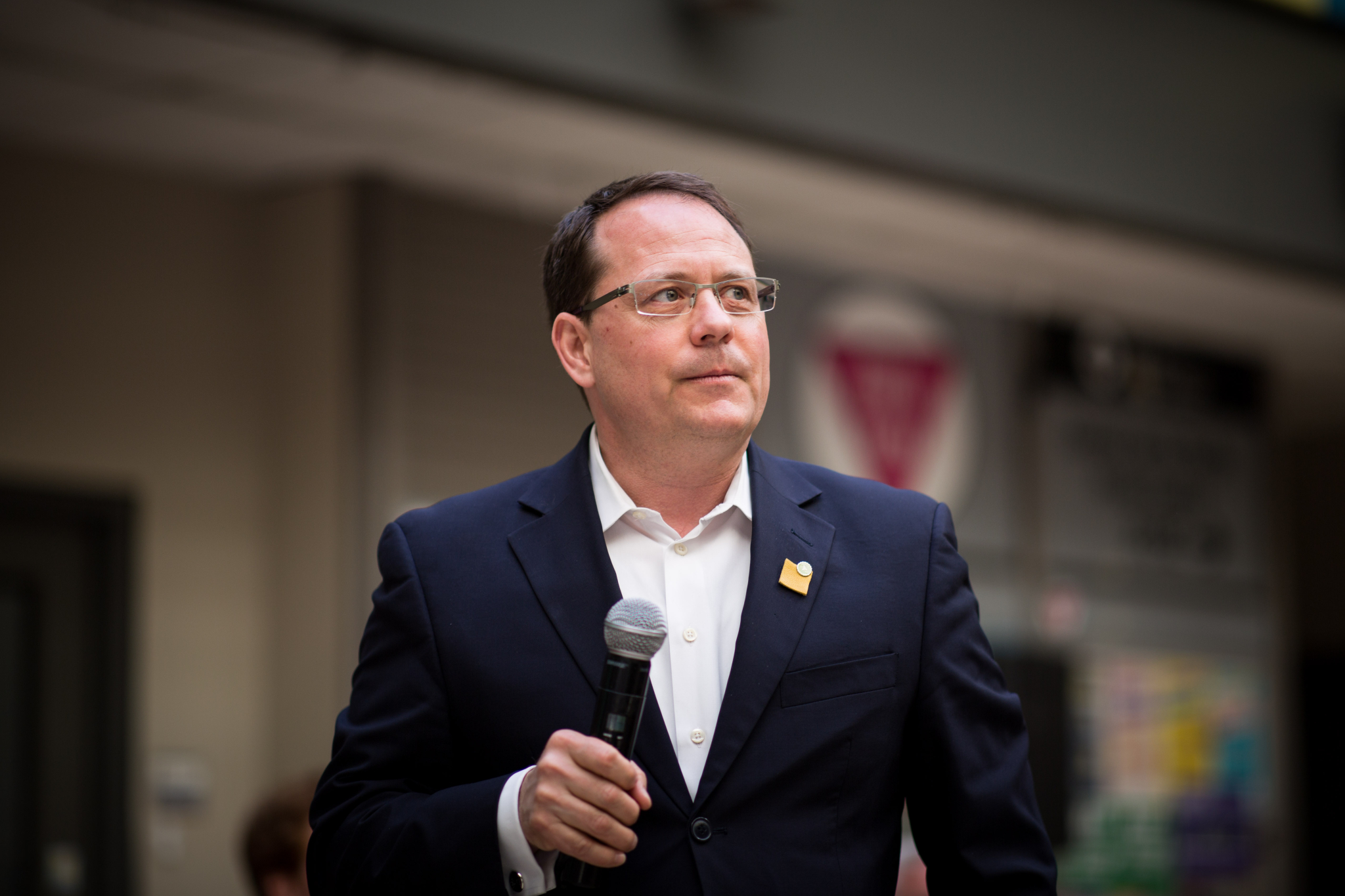 Green Party of Ontario Leader Mike Schreiner made history by winning a seat in the Ontario election June 7, 2018. Photo by Alex Tétreault
Previous story
Next story

Green Party of Ontario Leader Mike Schreiner became the first from his party to secure a seat in the provincial legislature after a historic win in the riding of Guelph Thursday night.

With early counts giving the Green Party just under five per cent of the popular vote – slightly less than in the 2014 provincial election – Schreiner was likely to be the only one of his party’s 124 candidates to make his way to Queen’s Park.

Ontario Greens were jubilant, tweeting: "WE JUST MADE HISTORY!!!!! Thank you, Guelph. The Green wave is officially in Ontario!!! "

In an interview with National Observer following his win, Schreiner said that that securing a seat in the legislature was the party’s first objective. With that one crossed off the list, he said he now feels “the responsibility of the job ahead of me.”

“I know that I have to work harder now for Guelph and the green movement that I believe in,” he said.

While the historic win was predicted in polls leading up to election day, Schreiner explained that what took him by surprise was the total number of votes in his name. As of late Thursday night, Schreiner was about 15,000 votes ahead of the Progressive Conservative candidate in his riding, Ray Ferraro.

“We could feel the momentum building,” he said, adding that he hopes seeing one Green MPP in action will encourage Ontario residents to vote for his party next time around.

Schreiner, who is originally from Kansas, ran on a platform of pushing Ontario towards 100 per cent renewable energy, incorporating mental health coverage into the Ontario Health Insurance Plan, and creating more affordable housing.

“I got into politics because I want to leave a liveable future for my children,” Schreiner said in his celebratory speech.

“And so I commit to you that I will work hard for you and I will work hard to make sure we protect the people and places we love in this province,” he said. “I’m ready to take my seat at Queen’s Park.”

That declaration aroused cheers and chants of "Mike! Mike! Mike!"

The Green Party was established in Ontario in 1983 and became the fourth largest party in the province 16 years later.

Schreiner took a moment during his speech to thank the long-serving Liberal MPP Liz Sandals, who did not seek another term, and former Ontario Premier Kathleen Wynne, for their service.

He also used the opportunity to send a message to the newly-elected Progressive Conservative Premier Doug Ford: “You said in the debate that you believed climate change was real and that people were causing it. And so you better listen to the Green MPP from Guelph!”

Schreiner later explained that while he would have preferred a minority PC government, he is hopeful that the new premier will reach out to him for advice regarding policies about climate and environmental matters. Specifically, Schreiner said he wants to convince Ford to embrace the clean economy.

“One of the things Greens have shown an ability to do is work across party lines.”

Congratulations, Mike! You have worked really hard as party leader, and you deserved this!

I look forward to you being the conscience of the legislature at Queen's Park, just as Elizabeth is in Ottawa.

We are our environment - it's

We are our environment - it's what we eat, drink and breathe, and what our children are made of. Let's hope that this signals the beginning of real voices for the environment in our Canadian legislatures!