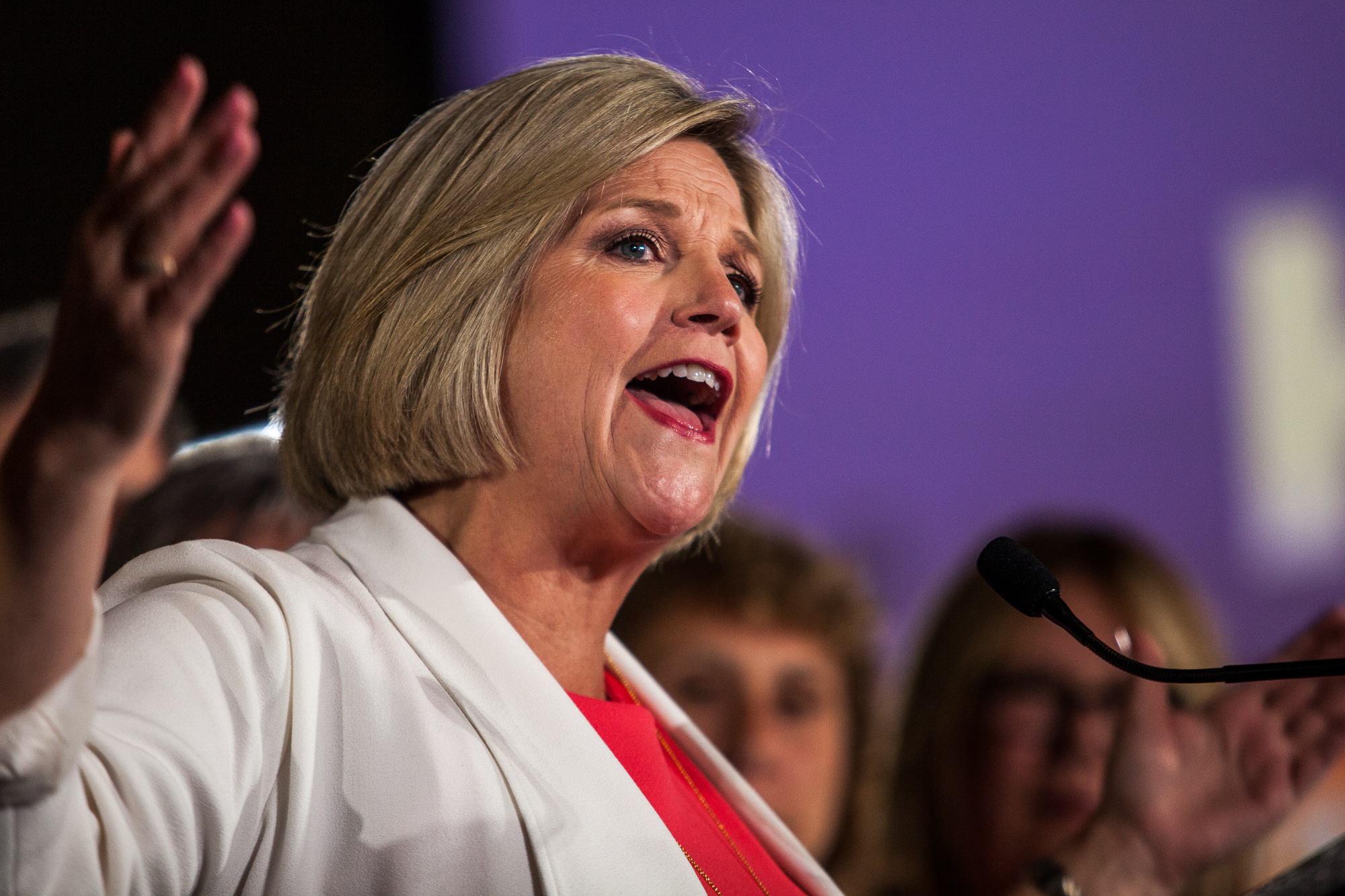 Ontario NDP Leader Andrea Horwath thanks her MPPs and supporters from Hamilton, Ont. after election results are called on Thurs. June 7, 2018. Photo by Giordano Ciampini
Previous story
Next story

NDP Leader Andrea Horwath handily won her Hamilton-Centre riding on Thursday night, but her hopes of becoming Ontario's next premier were dashed just half an hour after polls closed.

The NDP leader spoke with supporters on home turf at the Hamilton Convention Centre around 10:45 p.m. Eastern Time, following a speech by Premier-designate Doug Ford in Etobicoke. More than 200 people had gathered to greet Horwath, but some filtered out as the Ontario PC leader's majority win was announced on a giant screen in front of them.

"I am so proud of every candidate who put their name forward and I am so proud of every New Democrat who has been elected tonight," said the Hamilton-Centre MPP on stage. "We will keep fighting for you. Change for the better my friends, is more than a slogan, and my friends, we will not rest, we will not stop fighting until we have it — until we have change for the better."

As of 9:45 p.m. Eastern Time, Horwath's NDP were elected or leading in nearly 40 ridings, compared to Ford's 74, Kathleen Wynne's eight, and Green Party Leader Mike Schreiner's confirmed one. The NDP succeeded in doubling its number of seats in the legislature, while Schreiner made history by winning his party's first seat in Ontario.

Horwath congratulated Ford on his victory, and vowed to continue her party's fight for affordable health care and child care, and for environmental sustainability.

In a scrum with reporters, Horwath said she is “absolutely” going to stay on as leader of the Ontario NDP party.

“The people of Ontario gave me a new opportunity to make sure that their voices, their dreams, their hopes are being represented at Queen’s Park and I’m looking forward to doing that," she said.

Horwath added that Wynne's resignation as leader of the Ontario Liberals, announced late Thursday evening, was not a surprise. She had kind words for the outgoing premier, whom she credited for breaking "the glass ceiling" in Ontario.

“I do think it’s important to acknowledge that Ms. Wynne had a very long career in public life, and it’s something that, you know, people sacrifice a great deal to do that. I think it’s also important to say that she broke the glass ceiling, and girls and women around our province are I think very proud of the fact that we had the first female premier in Kathleen Wynne.”

Questioned by reporters about voters' decision to bring Ford's Conservatives into power, the MPP offered a bit of foreshadowing: “I respect that decision and I am grateful for the opportunity to lead the Official Opposition, and hold this government to account because Lord knows, they’re going to need to be held to account."

Orange from wall to wall

New Democrat strategist Kim Wright, who spoke with National Observer in the moments leading up to Horwath's speech, said the NDP's immediate focus in opposition will be on political strategy in the legislature, including possible collaboration with the Liberals and Green Party.

Despite Horwath's loss as premier, Wright hailed the night as "extraordinary" with "historic gains for the party."

"We went from third party, where we'd been since 1995 to leader of the Official Opposition, with an expanded caucus in some places where we hadn't traditionally won," she said. "We take office, we look at where the wins are, where the gains have been. We continue to organize, we continue to bring forward change that we think can work in the legislature depending on how the makeup is.

"There are a lot of conversations that can be had and how do we work with people across party lines to find what is right for Ontarians."

Earlier in the evening, Brantford resident Ruth Nabb said she came to Hamilton wearing a new orange t-shirt because she wanted to show her support for Horwath. Before results were released, she said it was "a little bit scary" that Horwath and Ford were running "neck and neck" throughout the campaign, and she was disappointed at how horribly people had turned against former Liberal premier Kathleen Wynne.

"We don't need American-style politics like (Donald) Trump and Doug Ford here," Nabb said. "We need to stay away from being mean-spirited."

A hard campaign with an early start

This was Horwath's third election campaign since becoming leader of the Ontario NDP in 2009. For months before the election, she trailed both Ford and Wynne in the polls. But at the start of May, the numbers started to turn and Horwath pulled ahead of Wynne.

In the first televised leadership debate, the Hamilton-Centre MPP stayed above the fray: as Wynne and Ford exchanged barbs, Horwath pivoted, telling the audience, “You don’t have to choose between bad and worse.”

By the third and final leadership debate three weeks later, Horwath was the target of both Liberal and Progressive Conservative criticism. She moved on the offensive, interrupting her rivals and going after Ford for not sharing a full platform even as people had begun to vote.

The NDP leader's platform – released before the election was called – was titled, "Change for the better," and came with ambitious promises of universal dental care and pharmacare, and $12-a-day daycare.

On the environment front, she committed to keeping Ontario a part of a cap-and-trade carbon market system that includes Quebec and California, but making it more transparent and more fair to lower-income and northern Ontarians. The system is designed to curb carbon pollution by making big polluters buy and trade credits when they exceed their emissions limits.

Horwath also said she would deal with the toxic watershed near the Grassy Narrows (Asubpeeschoseewagong Anishinabek) and Wabaseemoong First Nations — a public health crisis she nodded to in her Thursday night speech.

Editor's Note: This story will be updated throughout the night as more information becomes available.