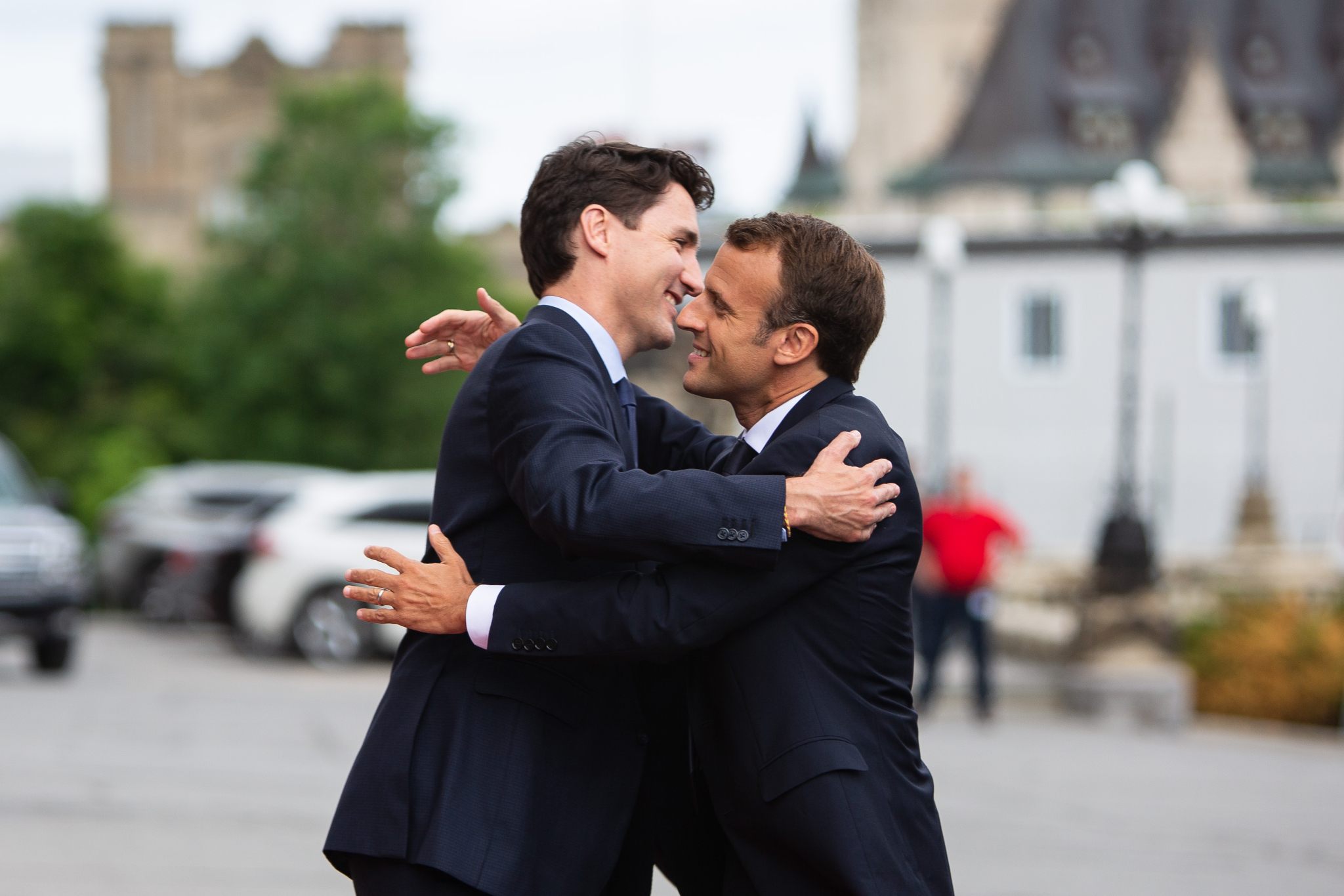 Prime Minister Justin Trudeau and French President Emmanuel Macron were peppered with questions Thursday about their strategy to deal with the elephant in the room at the G7 summit: United States President Donald Trump.

Trump, who tweeted Thursday morning that he is indeed "getting ready to go to the G7 in Canada to fight for our country on trade," has taken several measures that have infuriated fellow G7 nations, such as slapping tariffs on steel and aluminum on national security grounds, abandoning the Iran nuclear deal and backing out of the Paris climate accord.

Both Trudeau and Macron, who was visiting Canada the first time as French president, emphasized that their Trump strategy remains the same.

They have tried to be polite, but firm, with the U.S. leader, they said. They will speak against Trump administration policies, while also respecting the close economic, intelligence, cultural and myriad other ties their nations and citizens have with the Americans.

“Sometimes I've been criticized for being too friendly with President Trump," admitted Macron alongside Trudeau at a press conference on Parliament Hill on Thursday, a day before Trudeau welcomes G7 leaders to the 2018 summit in Charlevoix, Que.

But on the tariffs, he said, "the measures taken are counterproductive” for the U.S. economy, and their deployment on national security grounds is "inappropriate" for allied countries that exchange intelligence and stand together militarily. “To me, it's a matter of principle."

Trudeau said citizens expect their leaders to represent them, and that's what he has tried to do. “I have consistently stood up for Canadian interests," he said. “We are going to defend our industries and our workers."

The two leaders unveiled an assortment of new initiatives, including the Fonds Transatlantique, a new fund that they said would invest around $120 million so French and Canadian companies can develop business on each other's continents, and the Franco-Canadian Council of Ministers, which will meet every other year and develop joint initiatives.

They also signed a Canada-France Statement on Artificial Intelligence, which will create a "study group" of experts on the technology. The two leaders said artificial intelligence was "increasingly affecting all human activities" and have a big impact on growth and the labour market.

“People are interested in transformation related to artificial intelligence," said Macron, "on, ethics, and on protecting privacy.”​

Trudeau first welcomed Macron to Ottawa on Wednesday, where they held a private meeting in the prime minister's office, followed by dinner hosted by the prime minister and Sophie Grégoire for the French president and his wife.

Trudeau considers France as a close friend and partner, with both governments currently embracing the advantages of multilateralism.

Macron said he and Trudeau wanted to meet before the event, both because France takes over the G7 presidency next year, and because “this period is marked by great challenges."

“We have a shared ambition to work together in a constructive manner,” he said, to “defend strong multilateralism” and the fight for international trade and against climate change and extremism. “We remain resolute in this fight,” he said.

The summit is shaping up to be a showdown with Trump, particularly after Trudeau, Macron and U.K. Prime Minister Theresa May have all had testy phone calls recently with the American president.

On a May 25 call, Trudeau confronted Trump over his administration's tariffs on aluminum and steel, asking how tariffs could be imposed on the pretense of "national security." Trump reportedly responded with a false statement about the War of 1812, complaining about Canadians burning down the White House, more than 50 years before Canada was founded as a nation.

Macron had his own blunt exchange with the U.S. president that was described as "terrible," and which the French leader characterized later as "if we explained to people how sausages were made, it’s unlikely they’d keep eating them." May also told Trump the tariffs were "unjustified and deeply disappointing."

Trudeau has acknowledged that there will be "frank and at times difficult conversations around the G7 table, particularly with the American president," particularly on issues such as trade.

His position, and that of his officials, is that the G7 is precisely the sort of forum to have these kinds of conversations. "This is why we have G7 meetings," Trudeau said.

He reiterated that statement Tuesday alongside Macron. “We will also obviously have very robust discussions” on trade, he said, but the “dynamic” around the table at the G7 will be similar to other such meetings.

“The role of the G7," said Trudeau, is to "highlight the ways in which we work together."

Macron in the land of Justin

A hearty vote of non

A hearty vote of non-confidence in both of them: https://canadianviews-ymo.ca/tar-sands-forever-canada-forsaken/