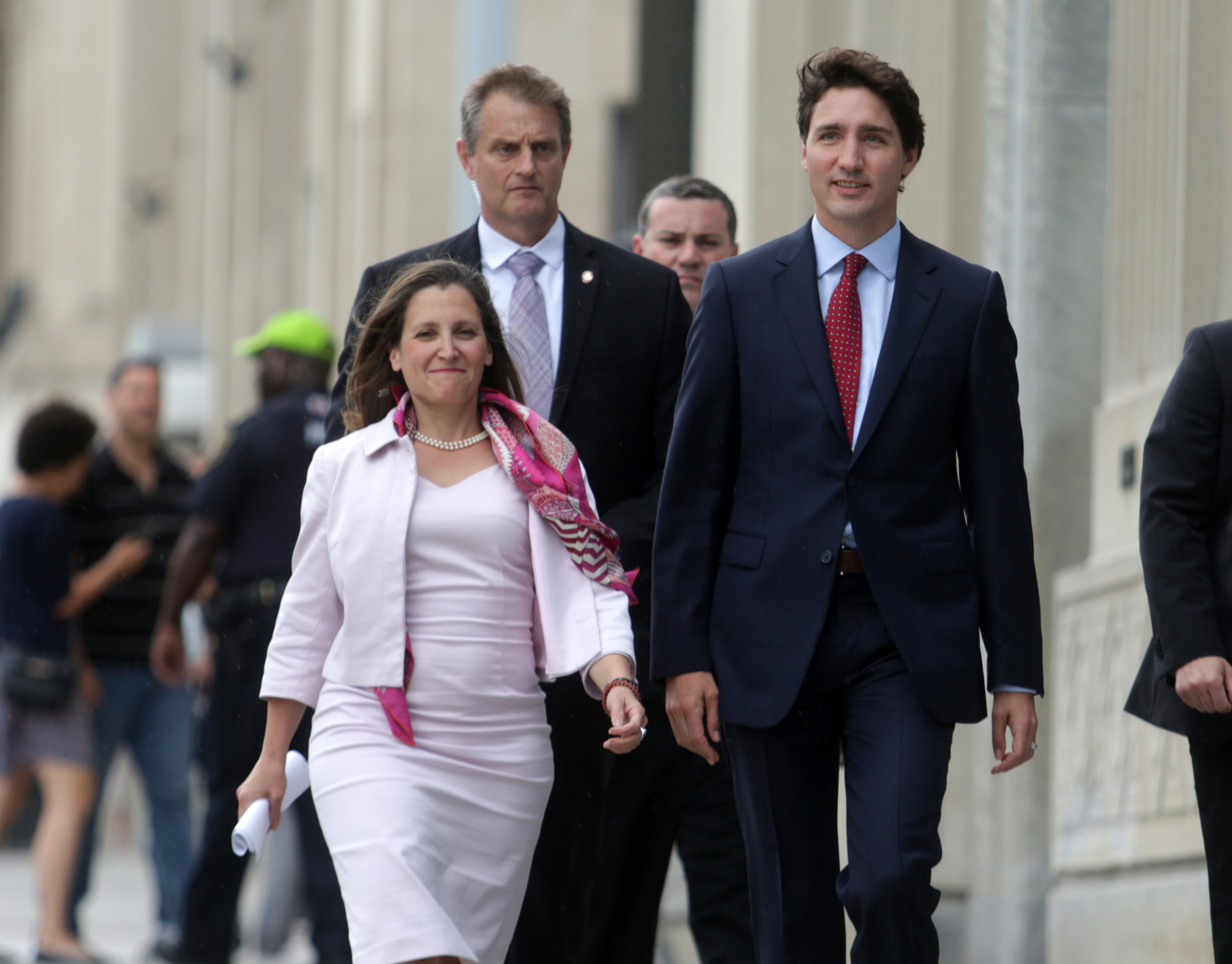 With a week to go in the Ontario election, and with her party polling in a distant third place, the leader of Canada’s most populous province decided to let loose with both barrels against the president of the United States, and said it was time to play hardball.

“I think that we’ve all had just about enough of Donald Trump. This is a president who rules by tweet. He’s a man who doesn’t seem to get that his bluster and his bullying are costing people jobs,” said Wynne, in comments to the press Thursday.

“There’s no talking to Donald Trump, because he’s not listening, unless it’s about him.”

Wynne was speaking at Mouvement d'implication francophone d'Orléans, which provides community and cultural services to Francophone residents in the Orléans suburb of Ottawa. She said the federal government had “moved heaven and earth” to try and reason with the president, but that it was time to change course.

“They have cajoled Trump, they have soothed his ego, they’ve played to his apparently inexhaustible vanity. And they’ve tried to find allies in Congress. I applaud their efforts and I have added to those efforts,” said the premier.

“The time for talk is done. Donald Trump is a bully, and the only way to deal with a bully is to stand up and push back, and we have to do that...we need to hit back at what Donald Trump has done.”

Trudeau says he has been 'clear and firm' with Trump

Wynne’s comments came as the Trudeau government announced it was imposing dollar−for−dollar tariff "countermeasures" on up to $16.6 billion worth of U.S. imports in response to the American move.

The tariffs, which apply to a long list of U.S. products that includes everything from flat−rolled steel to playing cards and felt−tipped pens, will go into effect July 1, Foreign Affairs Minister Chrystia Freeland told a news conference Thursday.

Freeland made the announcement alongside Prime Minister Justin Trudeau following word from the White House that the U.S. will slap tariffs on Canadian, Mexican and European Union steel and aluminium as of midnight Thursday night.

She called the U.S. measures illegal and counterproductive, and both she and Trudeau expressed how hard it is to imagine how Canada could ever be a national−security threat to an ally as close and important as the United States.

"That Canada could be considered a national−security threat to the United States is inconceivable," said Trudeau, adding that the people of the U.S. are not Canada’s target, and that the federal government would far prefer that its hand not be forced.

Canada, Mexico and Europe had been exempted from import duties of 25 per cent on steel and 10 per cent on aluminum when they were first imposed in March, but those exemptions will expire as scheduled on Friday.

"The government of Canada is confident that shared values, geography and common interests will ultimately overcome protectionism," Trudeau said.

"We will always protect Canadian workers and Canadian interests."

At the announcement, Trudeau was asked about whether he agreed with Wynne’s harsh comments, and whether he was taking a firm enough line, given the premier’s change in tactics.

Trudeau responded that his interaction with the president has been “clear and firm.”

“I’ve made it very clear to President Trump...that our relationship goes far beyond the interpersonal dynamic between two individuals. The connections between Canadians and Americans are deep, broad, multilayered, multifaceted, commercial, cultural, familial and those continue.”

Commerce Secretary Wilbur Ross confirmed Thursday that the United States would end the temporary exemption on Canadian, Mexican and European Union steel and aluminum as of midnight, as scheduled.

That means that President Donald Trump will be face to face with a number of leaders who have taken retaliatory action against the U.S. when he makes his closely watched Canadian debut at the G7 next week in Quebec.

While the tariffs have had "major, positive effects" on industry jobs and workers, "the Trump Administration’s actions underscore its commitment to good−faith negotiations with our allies to enhance our national security while supporting American workers," the White House said in a statement.

Canada, Mexico and Europe had been exempted until June 1 from import duties of 25 per cent on steel and 10 per cent on aluminum when they were first imposed in March. Barring an 11th−hour reprieve, those exemptions will expire as scheduled.

During a conference call early Thursday, Ross shrugged off questions about the U.S. facing possible retaliation, or whether the move would negatively affect the G7 meeting.

And he said that while he was looking forward to continuing negotiations, the U.S. is making its decision on national security grounds — a justification Foreign Affairs Minister Chrystia Freeland has dismissed as absurd.

In the case of Canada and Mexico, Ross said the decision was based on a lack of progress in the ongoing talks to update the North American Free Trade Agreement.

"As to Canada, Mexico, you will recall that the reason for the deferral had been pending the outcome of the NAFTA talks," he said.

"Those talks are taking longer than we had hoped. There is no longer a very precise date when they may be concluded" so they were added to the tariff list, he said.

If Canada and Mexico choose to take retaliatory measures, it will not affect the ability to keep renegotiating NAFTA as a separate track, he added.

"If any of these parties does retaliate, that does not mean that there cannot be continuing negotiations," Ross said. "They’re not mutually exclusive behaviours."

Tactic sure to cast pall over G7

The long−threatened tactic is sure to cast a pall over the G7, with some observers saying a G6−plus−one scenario is already shaping up, with Trump as the outlier.

Ross played down the divisions. "There are periodic disagreements between any two countries on any given set of topics. That doesn’t necessarily mean that it derails other discussions at all," he said. "It all depends on how the various parties react to the circumstances."

European Commission President Jean−Claude Juncker, who will be at the G7 table with the seven other country leaders, expressed strong opposition to Thursday’s decision.

"The EU believes these unilateral U.S. tariffs are unjustified and at odds with World Trade Organization rules. This is protectionism, pure and simple."

Trump had been widely expected to impose tariffs on European steel and aluminum imports after failing to win concessions from the European Union. Canada and its European allies have spent recent days making a concerted effort to head off the move.

Trudeau and French President Emmanuel Macron made their cases separately Wednesday to dissuade Trump, who is using a national−security clause in U.S. trade law to justify the move. Trudeau and Macron will meet next week in Ottawa before the G7 to talk strategy.

There is a silver lining to

There is a silver lining to all this. In the period before free trade Canada used to consider something called "industrial policy", in which a country's government takes actions intended to improve the country's economy, build up key industries and acquire important capabilities. In the free trade era, most ways of actively building up a country's economy were "protectionist" and we abandoned them, with the result that our manufacturing sector declined a great deal and we returned to the traditional, essentially third world, role of "hewers of wood and drawers of (oil)".
Now it seems protectionism is back, maybe we can talk once again about the government taking an active role in building up the country's economy--like Japan and South Korea and indeed the early United States did.