Not all heroes wear bras: students fight for the right not to wear one 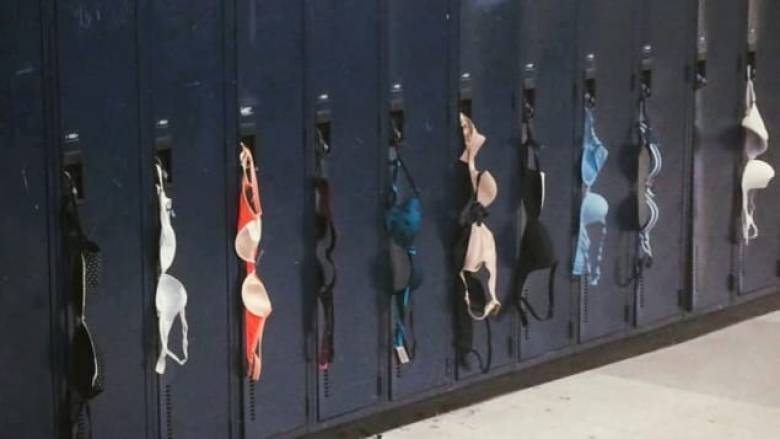 A few years ago, students at Robert-Gravel high school in Montreal hung bras from their lockers to protest a dress code. Facebook photo
Previous story

Students at an all-girls private school in Montreal have launched a petition to make bras optional after a student was told she should be wearing one.

A student at Le Pensionnat du Saint-Nom-de-Marie who wasn't wearing a bra under her top was taken aside by a school administrator and told to cover herself. She refused and went home. Fellow students are supporting her by going braless in protest.

“Dear School Officials, we are not screaming for a revolution, we are demanding the right to evolution,” states the online petition, which has more than 2,000 signatures at time of writing.

The reason for the school’s stance, according to the petition, was that her lack of a bra could make male teachers uncomfortable.

CBC quoted the head of the school, Yves Petit, saying in a letter to parents that the dress code does not mention the wearing of undergarments but it is a matter of judgment and staff will continue to intervene "when an outfit is deemed indecent."

This young girl was reprimanded and shamed because there was a remote possibility that her unsupported breasts might offend the male gaze. Because her breasts, free of the constraints of a bra, might be seen as a public menace and must be squeezed into submission or forever banished from unsuspecting victims’ line of vision. She is basically being told that the choice of wearing a certain undergarment or not is not hers to make. Imagine if a school told boys they could no longer wear boxers, only briefs. Is that some seriously backwards Victorian-era puritan nonsense or what? After all, men cannot be exposed to the flesh and feminine wiles of young women because – devoid of any agency and self-control -- they are clearly powerless in their presence. Accountability, it would appear is only a woman’s burden to bear.

Policing women's bodies is as old as time

It’s as if our bodies were somehow a public (and highly distracting) domain. It’s no wonder then that we live in a world where so many women develop eating disorders while attempting to meet impossible weight standards, and why so many men think that they get equal decision-making power when it comes to women’s reproductive rights. It’s not a stretch, after all, to think you get a say in whether a woman should have an abortion if you’ve been accustomed to having a say in what women do, what they wear, what they say, and how loudly they say it.

Incidents like these are nothing new, unfortunately. While we may laugh at 1920s images of police measuring women’s bathing suits to ensure compliance with the government length requirement in the U.S. (yes, that was a thing), we’re not nearly as evolved as we think. Young teens are told their leggings (the most comfortable item of clothing known to mankind) are “distracting to boys” in class; others who go braless are asked to cover up their nipples with band-aids; and those who do decide to wear a bra are sent home because their straps are showing. This is a game girls and women can’t win.

In some instances, the puritanism defies logic and we find ourselves living in a world that is now sexualizing toddlers, as in the case of a Winnipeg couple who were told that their three-year-old daughter’s sundress was “inappropriate for pre-school” because its spaghetti straps weren’t wide enough.

“I don’t think any girl should have to worry about how much shoulder she’s exposing when she dresses to go to school or anywhere else. At any age,” said the girl's mom Sadie Stonehouse.

Students demand control of their own bodies

“If we want change, it is our duty to stand up, to express ourselves and to persist,” the Le Pensionnat du Saint-Nom-de-Marie petition says. “Of course, we do not all want to stop wearing bras. Instead, this is a demand for access to choice, which is a fully human and personal right.”

Asked about the protest, Hélène David, the Quebec cabinet minister responsible for women's issues, said that whether young women should be forced to wear a bra in school is an "extremely interesting" question, and declared herself “on the side of freedom of choice.”

Outdated, strict, and routinely arbitrary dress codes send the message that women should be ashamed of their bodies and “modestly” hide them from others’ gaze. It’s an unforgivable message to send young girls navigating their way through the world’s expectations of them and their own conflicting feelings about what they look like and who they are becoming as women.

“It is sad to see a school, which claims to value the consciousness of social inequalities and feminism, to act in this way,” adds the petition. “Since secondary school, we were told that we will be trained to be good citizens of the world and that being a woman does not limit us, but how do these conservative approaches convey such ideas?”

The school should be proud that their students are so self-confident, so comfortable in their skin and so vocal about their rights. David called them “leaders with strong personalities.”

Make no mistake, this petition isn’t just about a bra (although many women will admit it’s the first thing that comes off when they walk through the door to their home), it’s about women claiming ownership of their bodies and regaining the freedom to make their own choices. These girls may not be burning their bras in protest, but they’re certainly demanding the right to do as they like with them -- and by extension, their lives.

Hijabs and turbans should be allowed in Montreal police uniforms

Both make and female students

Both make and female students should be required to wear gowns over whatever they want. There is truth in that a young man teaching a younger woman will be affected biologically. Some say that it's his tough luck and females should be able to sit nude in class if they want. Gowns resolve all this. Let kids learn and avoid politicising classrooms.

In 1963, my mother wrestled me into a Sears store to buy my first training bra over my vocal protests. Unlike the bra burning protests of the late 60s, I buried that training bra in a vacant lot near our home. I eventually lost the bra battle with my mother, but by 1970, I was defiantly bra-less and have remained so to this day. I am 70 years old. You go, sisters, at Le Pensionnat du Saint-Nom-de-Marie.

Say it loud. Being in a

Say it loud. Being in a woman's body should not be equivalent to being in armour. If a bra works for a young woman, she has the right to put one on.....if it doesn't, free breasts feel pretty awesome, and there are lots of clothing options that allow us to go bra less, without feeling over exposed. I do quite often as well....and I'm roughly the same age as you.

If we can be polite and considerate of some of the beer bellies walking out of harness through our public squares, men can show the same respect for the female form. After all. It is 2018!