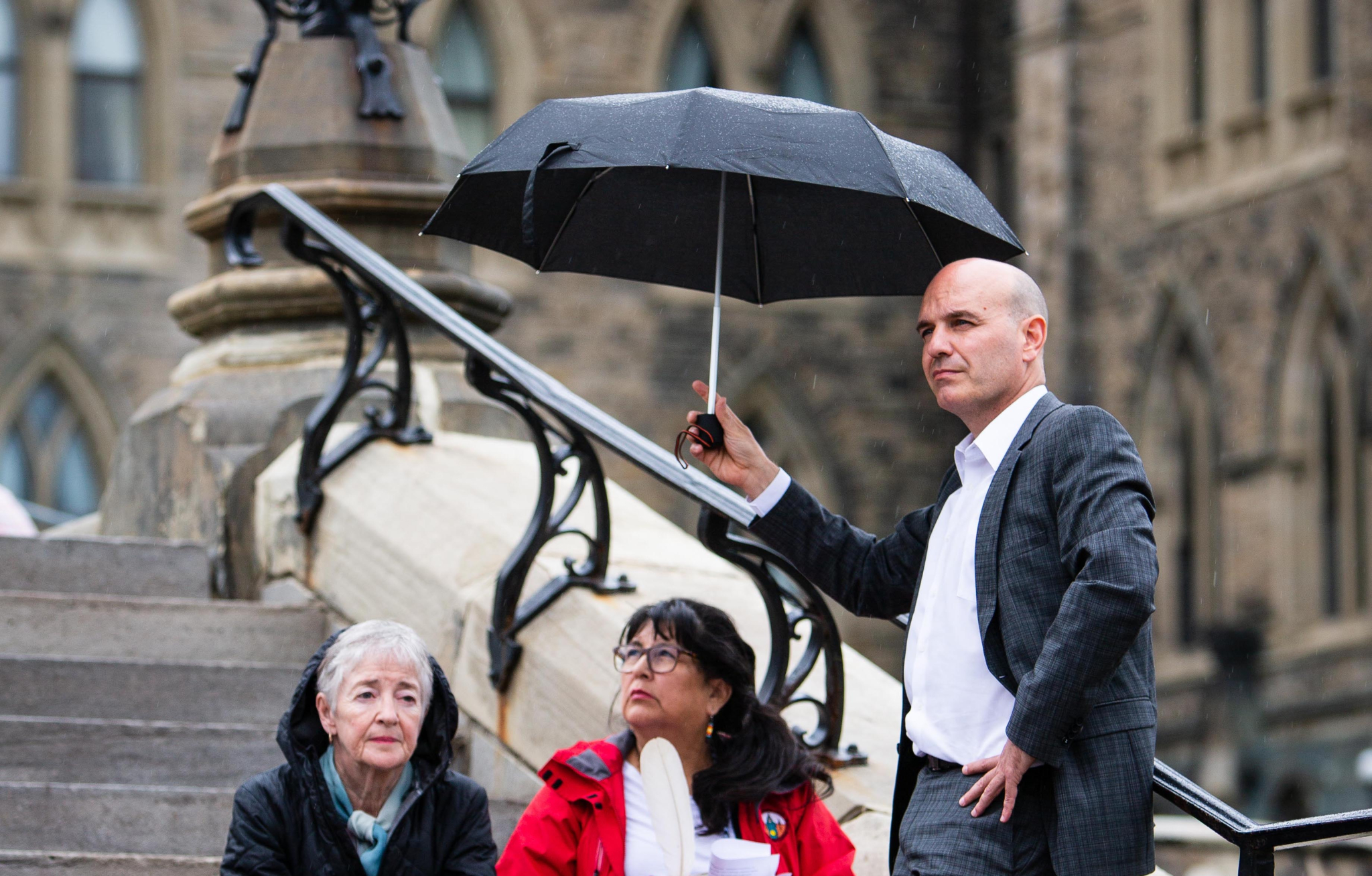 NDP MP Nathan Cullen holds up an umbrella for Kitigan Zibi Anishinabeg member Verna McGregor and Council of Canadians chairperson Maude Barlow at an anti-Kinder Morgan event in Ottawa on May 22, 2018. File photo by Alex Tétreault
Previous story
Next story

NDP MP Nathan Cullen is accusing the Trudeau government of buying "the biggest lemon in Canadian history," after a dramatic revision of the estimated size of an oil spill that occurred right before it announced a $4.5 billion deal to buy the pipeline involved in the incident.

Cullen asked in the House of Commons Monday how an oil spill that was reportedly only 100 litres two days before the government announced its purchase of the Trans Mountain pipeline turned out to be 4,800 litres only two weeks later.

The pipeline in question was Kinder Morgan-owned Trans Mountain line, originally built in 1953. The oil pipeline is part of a west coast system that the Texas energy company was planning to expand until it agreed to sell its Canadian assets to the Trudeau government in a $4.5 billion deal announced on May 29, 2018.

The company has said the spill was contained on its property and under control, but Cullen was skeptical about the revised numbers.

"Two days before the Liberal government bought a 65-year old pipeline for $4.5 billion, that pipeline sprang a leak," Cullen, MP for the B.C. riding of Skeena-Bulkley Valley, said in the Commons. "'But don't worry,' said Kinder Morgan, 'it's just a 100 litres.' But it turns out that oil spill was 48 times larger than that. Thank God it didn't happen over water, because these guys (in government) still don't know how to clean it up."

The government has offered to buy the assets because it believes the expansion project would be critical to the Canadian economy by allowing producers operating in Canada oilsands, the world's third largest reserve of crude oil after Saudi Arabia and Venezuela, to get access to new markets in Asia.

Government officials have also expressed concerns about the Canadian oilpatch being dependent on selling most of its oil to the U.S., particularly in a context of an administration, led by President Donald Trump, with protectionist policies.

#QP 8/ @nathancullen Trans Mountain: What kind of climate leader goes out and buys a 65-year-old leaky pipeline?@jimcarr_wpg ...Pipeline Safety Act enshrines 'polluter pay' into Cdn law…Companies will be held liable regardless of fault & must have $1B available for response pic.twitter.com/y9NUSDsTRl

"Hey, you ever buy a used car when you turn it on it sounds really strange? But the seller cranks up the radio real quick and says, 'don't worry about it.' But that's what the Liberals just did, maybe buying the biggest lemon in Canadian history."

The Trans Mountain expansion project proposes to triple the capacity of the existing system, allowing it to transport up to 890,000 barrels of bitumen, a heavy oil from the oilsands, and other petroleum products daily from Alberta to a terminal in the City of Burnaby, a metro Vancouver suburb. From the terminal, the petroleum products could be exported on tankers to Asia. Opponents say it is too risky and will push Canada's climate change targets out of reach by triggering expansion in the oilsands, Canada's fastest growing source of greenhouse gas pollution.

Cullen told the Commons that the spill numbers suggest that the government has bought a lemon.

"Hey, you ever buy a used car when you turn it on it sounds really strange? But the seller cranks up the radio real quick and says, 'don't worry about it.' But that's what the Liberals just did, maybe buying the biggest lemon in Canadian history. So what kind of climate leader goes out and buys a 65-year-old leaky pipeline anyway?"

The spill volume reported from Kinder Morgan's Darfield station north of Kamloops on May 27 was revised to 4,800 litres from 100 litres, the B.C. Ministry of Environment said Sunday, The Canadian Press reported. The ministry said this estimate was based on the minimum threshold under which a company is required to report a spill, the news agency reported.

Natural Resources Minister Jim Carr responded in question period by noting that the Pipeline Safety Act, recent legislation adopted when the Harper government was in power and brought into force by the Trudeau government in 2016, addresses environmental concerns about spills, by holding companies accountable.

"Getting resources to market is the fundamental responsibility of any government, but that must be done with the highest regard for safety and the protection of the environment," Carr replied in the Commons. "The Pipeline Safety Act strengthens Canada's pipeline safety system, enshrining the polluter pay system into federal law. Companies will be held liable regardless of fault and will be required to have the resources of up to $1 billion to respond to incidents."

Prior to the incident, Kinder Morgan had asked the federal regulator, the National Energy Board whether it could ease requirements to set aside adequate financial resources. The NEB denied this request in a letter dated April 12, 2018.

Meantime, regarding the apparent change in the estimated volume of the spill, Trans Mountain told CP that it hadn't provided an estimate to regulators when it reported the incident.

"Trans Mountain had not provided an estimate of the volume spilled, other than to confirm with regulators that it was over the reportable threshold, until cleanup had sufficiently progressed to a stage where an accurate estimation could be provided," Trans Mountain spokeswoman Ali Hounsell told CP in an email.

But the company provided the updated estimate following an onsite investigation, and is now completing the cleanup, Hounsell told CP.

B.C.'s spill reporting rules require companies to report spills of this nature immediately and that the quantity of any amount spilled should be included "to the extent practical."

The company turned off the pipeline for several hours the day of the spill, which the ministry said came from a leaking flow metre.

The spill was contained to the station property and no waterways were affected, the ministry said.

This offer was triggered by an ultimatum, made public on April 8, 2018, by Kinder Morgan, threatening to cancel the project if the government failed to provide more guarantees that it could help it cover losses due to the risks of its investment. The Texas company then cancelled non-essential spending on the project, forcing the government to begin the financial negotiations that culminated in the May 29 offer.

The company has said it is now pursuing construction work, due to the government's offer which covers construction costs until the sale is completed later this summer. The government has said it doesn't want to own the project long-term and that it is looking for a new buyer that could allow for greater First Nations ownership of Trans Mountain.

Recent oil spill disasters show why B.C. should be cautious

Who is actually responsible

Who is actually responsible for the initial inaccurate report?
Why would the B.C. Ministry of Environment report 100 L had spilled if the amount was actually indeterminate?
Were there no govt officials on site?
If Kinder Morgan knew that public reports of 100 L were a gross underestimate, why did they not set the record straight immediately?

Canadian Press:
"The B.C. Ministry of Environment says 100 litres is the minimum threshold under the company’s spill reporting obligations, so that’s why the ministry estimated 100 litres at the time.
"Trans Mountain spokeswoman Ali Hounsell says the company never provided an estimate of how much medium crude oil escaped, other than to confirm with regulators that it was over the reportable threshold.
"Following an onsite investigation, she says Trans Mountain has provided the updated volume estimate to regulators."
• vancouversun [dot] com/news/canada/spill-at-trans-mountain-station-larger-than-b-c-government-first-reported/wcm/98656dfc-fbf5-4708-98a2-2a8bec43b92b

Awfully convenient for a pipeline company anxious to dump its white elephant onto taxpayers.
What's the real story here?
A little more digging is needed. A job for the National Observer?

This must stop the Liberals

This must stop the Liberals in their tracks. Pull out of this deal before it's finalized even if the government has to pay a fine to do so. By golly, Trudeau and his wonks are leading a one term government for sure if he doesn't dig himself and the country out of this mess. Nothing can justify going forward.

If all the other problems

If all the other problems weren't going to stop the Liberals in their tracks, this sure won't.

There is no mystery or

There is no mystery or misdemeanour here. The pipeline company is required to make an initial report as soon as a spill reaches 100 litres. Obviously, if the spill has not been stopped at that time, they cannot report the total size of the spill. Providing an accurate measure of the size of the spill can only be done after an on site investigation which includes time to travel to the site of the spill. They don't have investigators stationed every 500 feet along the pipeline. I am personally opposed to this pipeline until all 157 "conditions" of NEB approval have been fully met, but finding flaky and ill founded fault with Kinder Morgan does not contribute to getting it done right.

As to the 157 conditions, then I expect you're going to stay opposed to the pipeline because there isn't a snowflake's chance in hell they'll all be met. They never are. That kind of thing is a fig leaf, something to point to until the thing is done and it's too late. Then the regulators shrug and wash their hands of it, maybe slap their wrists with a little fine or two.
A bit different if the government owns the thing, I can imagine the bad publicity haunting them a bit for violating their own conditions. My expectation is they'd make sure to pay themselves the fine first before they do a fire sale to the private sector, so the lucky winner/generous campaign contributor won't have to worry about such frivolous details.

trying to sell A Leeky Lemon

trying to sell A Leeky Lemon too the First Nations