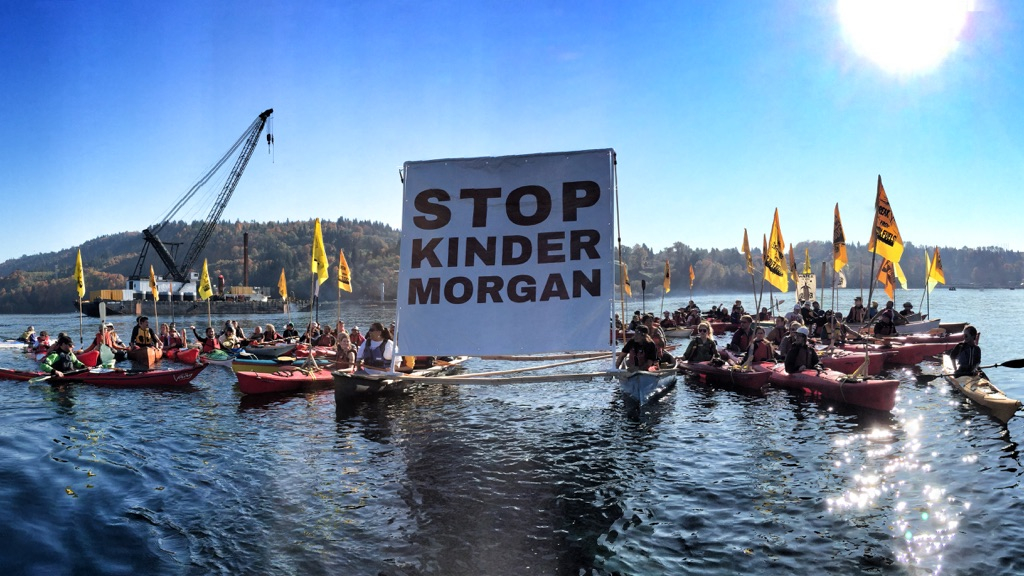 A group of kayaktivists gather before heading to a construction barge in Vancouver harbour near Kinder Morgan's Westridge Marine Terminal on Oct. 28, 2017. File photo by Zack Embree
Previous story
Next story

Kinder Morgan put fish, porpoises, sea lions and other marine life in danger during recent construction work near an oil terminal in Vancouver, says a leaked federal letter that warns the company could face prosecution for its violations.

The letter from the federal Fisheries and Oceans Department (DFO) notes that the company also went months without filing mandatory monitoring reports to the government and First Nations before federal officials noticed the Texas company was breaking the rules.

The department sent the warning to an executive at the company's Canadian unit, Trans Mountain, in a letter dated June 6, 2018 and obtained by National Observer. That was just days after the Trudeau government announced a deal to take over the Trans Mountain pipeline expansion project and buy many of Kinder Morgan’s Canadian assets for $4.5 billion.

It has prompted environmental lawyer Eugene Kung to raise this question: “Down the line, if the feds become the owner, what does it look like for them to prosecute themselves?”

The letter contrasts with recent assurances by the federal government that its officials have kept a close eye on the company and taken adequate measures through a "world-leading" plan to ensure that the Trans Mountain west coast pipeline and tanker expansion project will proceed without damaging the environment or public safety.

The Trudeau government approved the expansion project in November 2016, prompting fierce opposition from several affected First Nations and communities along its proposed route. But at the time, the government said that it was also imposing 157 conditions on Kinder Morgan, as recommended by the federal energy regulator, the National Energy Board (NEB), to ensure that the project would be safe. These conditions included requiring the company to obtain more than 1,000 federal, provincial and municipal permits required for different stages of the construction.

The fisheries department gave Trans Mountain permission to begin some expansion work on its Westridge Marine Terminal on Sept. 8, 2017, provided that it meet a number of safety and environmental conditions. Non compliance would contravene a major Canadian environmental law, the federal Fisheries Act, that is used to protect bodies of water inhabited by marine species.

The warning letter identifies four different violations related to pile driving during expansion work on the Burrard Inlet in the metro Vancouver region near the Kinder Morgan terminal between January and May 2018. The company exceeded safe underwater noise limits for such marine species as the harbour porpoise and the Steller sea lion as it proceeded with the pile driving activity, according to a separate email sent by the federal department to members of an Indigenous Advisory and Monitoring Committee that was set up to keep tabs on the project.

The letter also noted that the company failed to file required construction monitoring reports to the federal department and members of the special committee, including First Nations representatives, for three consecutive months, from January to March. The department said in the letter, sent to Trans Mountain vice president David Safari, that it only noticed that Trans Mountain wasn't filing its mandatory reports after email correspondence with the company on April 26, 2018.

“By way of this letter, we are therefore providing you with a written warning for having contravened the Fisheries Act, particularly for having carried on works, undertakings and activities without complying with the conditions prescribed by the Minister under… this Act,” said the four-page letter, signed by Tracey Sandgathe, a regional manager from the department’s fisheries protection program.

“Please note that this warning letter does not exclude prosecution under the Fisheries Act in respect of this project in the event of future instances of non-compliance.”

The letter also said that the department had reviewed noise monitoring records in April, noting that construction work exceeded an underwater noise threshold for injury to finfish on six separate occasions during impact pile driving on April 3, 2018. Each time Trans Mountain exceeded the limit, the monitoring records indicated that it attempted to reduce noise levels without any success, the letter said.

“Despite adjusting the mitigation measures after each of the six separate exceedances of the underwater noise threshold, the noise threshold continued to be exceeded after each subsequent attempt,” Sandgathe wrote in the letter. “Despite failing to reduce noise levels to below the threshold, Trans Mountain nonetheless resumed pile driving after each exceedance.”

The email shared with members of the advisory committee said that the department based the letter on a review of construction reports and follow up with Trans Mountain between April 3 and May 29, the latter being the date that the government announced that it was making an offer to buy the project for $4.5 billion.

Prime Minister Justin Trudeau and other government officials have said that Canada is a country based on the “rule of law” — warning opponents, including the B.C. government, that they have no authority to stop the oil and tanker expansion project since it was approved by the federal government and falls under its jurisdiction.

More than 200 people have been arrested for violating the injunction near the terminal on Burnaby Mountain, and thousands more have pledged to do whatever it takes to stop the Trans Mountain expansion.

'Part of a pattern'

The Trudeau government made its offer to buy the project after the company threatened to abandon the expansion due to uncertainty caused by fierce opposition in British Columbia. Trudeau has said that the project is critical to Canada’s economy since it would enable producers in Alberta’s oilsands to bypass their main customer in the United States and find new markets in Asia.

Trudeau also told National Observer in an interview last February that the project was helping to ensure support from Alberta, home to the world’s third largest oil reserves after Saudi Arabia and Venezuela, for a national climate change plan. Opponents say that the Trans Mountain expansion is too risky and would push Canada's international climate change goals out of reach.

Under the $4.5 billion deal, Safari, the vice president who received the warning letter, and Kinder Morgan Canada president Ian Anderson, would each receive bonuses of $1.5 million if they remain in their current positions, after the sale is completed, until July 2020.

Kung, a lawyer from West Coast Environmental Law, a firm providing advice to one of the First Nations affected by the project — the Tsleil-Waututh — noted that this isn’t the first time Kinder Morgan has been caught breaking the rules.

Last fall, the federal pipeline regulator, the National Energy Board, ordered the company to stop using anti-spawning mats in streams inhabited by fish, after it had started to do this work without authorization.

“It’s part of a pattern that we’ve observed and sadly not all that surprising about Kinder Morgan not being able to even meet the minimal requirements that were the result of the NEB process and here’s another example of them violating the conditions and essentially having very little consequences, which is what DFO is saying,” Kung said in a phone interview.

DFO didn’t immediately respond to questions about the warning letter. Trans Mountain told National Observer in a statement that it is “committed to compliance with its environmental and regulatory obligations,” and “aggressively implementing measures to avoid future non-compliance.”

The company also said it was engaging with DFO “directly, transparently and collaboratively through ongoing site inspections, information request exchanges and required reporting.”

“The Trans Mountain process for responding to underwater noise exceedances is designed to protect marine life. In the case described in the April monitoring report, it is key to note that each exceedance resulted in an immediate response by Trans Mountain. In each instance, pile driving was stopped, the situation was assessed and further mitigation was undertaken.”

The company also said it “recognized and reported exceedances of the thresholds and followed a mitigation plan which included providing the occurrence details, mitigative actions taken and results in the reports and responses to Information Requests from DFO.”

Regarding the missing reports, Trans Mountain said it started sending them after they were told the committee wasn’t receiving them, but it didn’t explain why it had failed to send these reports in the first place.

Last summer, the company had said it was taking an "innovative approach" to reducing noise from pile driving, by using special noise shrouds "to cover the hammers that drive piles into the ocean floor" for the new terminal.

"The shrouds, which are about two stories tall and wide enough to hold a medium-sized SUV, dampen the sound of hammer impact by 65 to 95 per cent," Trans Mountain said on its website on July 6, 2017.

The project's director for the Lower Mainland region, Randy Brake, said on the website that this technique had been used in other ports around the world, but that it would be the first time it was being used for a piling project in the Vancouver Port.

Several months later, some local residents living near the terminal in Burnaby said that the pile driving was shaking their homes and causing small tremors, Burnaby Now reported on March 7, 2018. One resident even told the local publication that the noise and vibrations were enough to wake him up on a Saturday morning in his home on a hill, about 700 metres above the terminal.

“You could literally feel it through the bed and obviously through the walls. You put your ear or your hand up to the wall, and literally you can feel it,” the local resident, Aaron Keogh, told Burnaby Now. “The further concern from that is what effect will weeks of ongoing activity like that...have on the structures — basically the houses and such — (and the) surrounding the area?”

Trans Mountain declined to respond to a question about whether the "noise shrouds" had worked as it had anticipated.

I am one of those residents

I am one of those residents who find the noise from piledriving intolerable. Even with my doors and windows closed the piledriving noise inside my house is sometimes louder than my radio. I certainly can not go out for a walk. I have heard the banging while I am in Centennial Park and even heard it outside the Academic Quadrangle at SFU. It is clear that the DFO should stop it immediately.