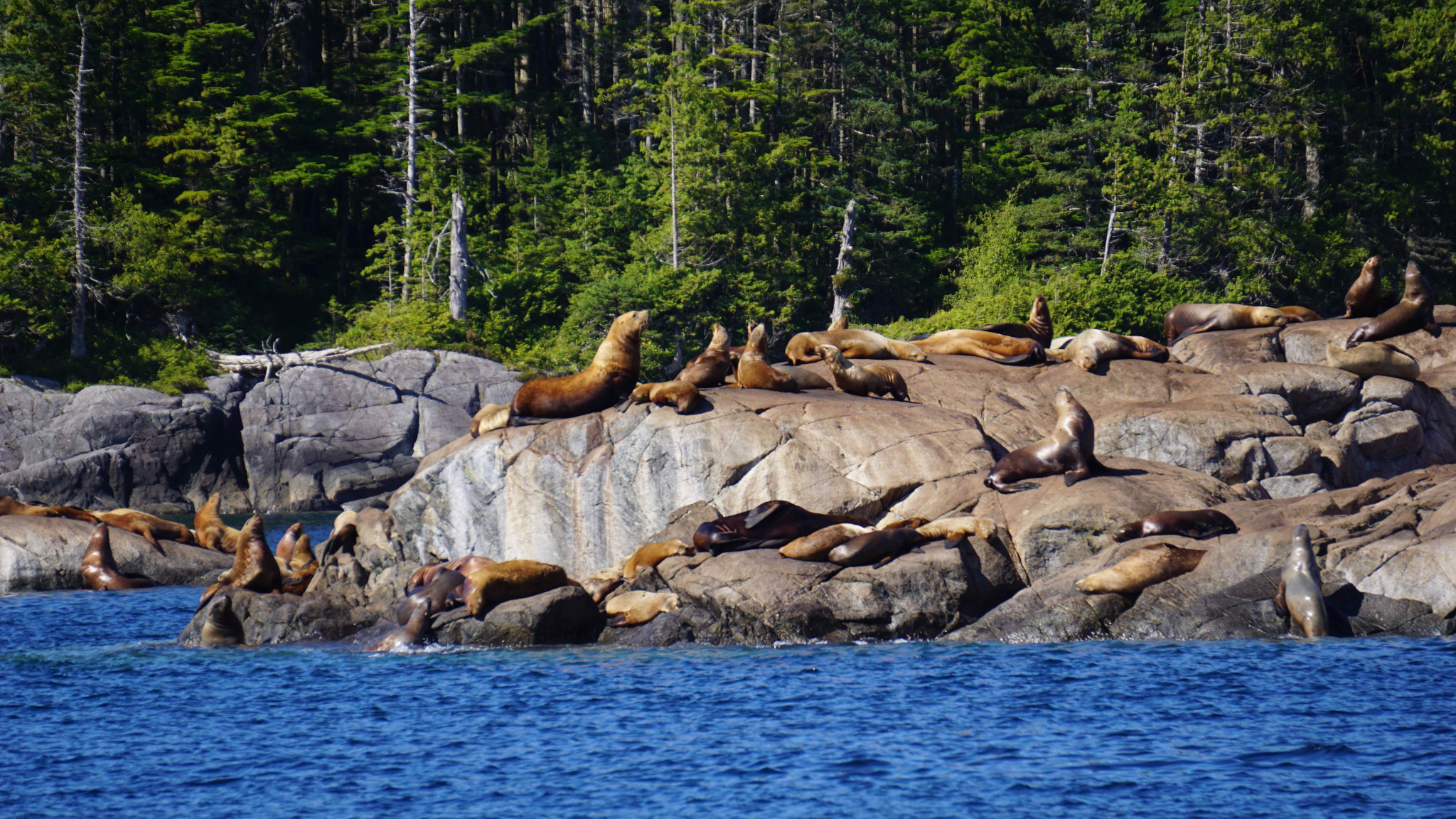 Steller sea lions on B.C.'s coast are listed as a species of special concern under Canada's species at risk act. In this image, sea lions are featured soaking in some sun in Laredo Sound, B.C. on Sept. 5, 2016. File photo by Elizabeth McSheffrey
Previous story
Next story

Texas-based pipeline operator Kinder Morgan took six days to reply to a letter from Canada demanding an immediate response to a warning that it had violated an environmental law during construction work on its Trans Mountain expansion project, a federal spokeswoman said on Wednesday.

The violations, reported by National Observer on Tuesday, were listed in a June 6, 2018 warning letter the department sent to a Canadian executive responsible for the oil pipeline and tanker expansion project on the west coast. It said that Trans Mountain had violated the federal Fisheries Act by exceeding safe underwater noise levels during pile driving around an oil terminal and by failing to file mandatory follow up reports.

Excessive noise in the area around the terminal, the Burrard Inlet, would put mammals such as harbour porpoises and Steller sea lions in danger. The porpoises and sea lions on the west coast are both listed as species of special concern under Canada's Species at Risk Act.

DFO told National Observer on Wednesday that the company responded to the warning letter on the same day the news article was published.

"DFO was contacted by Trans Mountain today (June 12) regarding the warning letter," said Lauren Sankey, a communications officer with DFO, in an email to National Observer. "DFO will be requesting a meeting to discuss the letter and compliance going forward."

The June 6 warning letter also noted that the company had failed to share copies of its monitoring reports with First Nations and federal officials on a special Indigenous Advisory and Monitoring Committee (IAMC) set up by Prime Minister Justin Trudeau's government to keep tabs on the project. The company also failed to report to DFO with an explanation for the violations, as required by law, the letter said.

"To this day, Trans Mountain has not provided a report containing this information in relation to the non-compliance issues outlined above to DFO and the IAMC, as is required," a federal fisheries official had wrote in the June 6 letter to Kinder Morgan. "We remind you of the obligation to do so and request that you provide DFO and the IAMC with a copy of such a report immediately."

In a statement sent to National Observer on Wednesday, Trans Mountain said its June 12 response letter was part of the "ongoing discussion" regarding construction monitoring that included "written and face-to-face exchanges."

"While Trans Mountain provided the IAMC with the December 2017 construction monitoring report, we became aware on April 26, 2018 that we had not sent IAMC the January, February and March 2018 reports," the company said in the statement. "Those reports were provided to IAMC on April 26 and we commited to share future monthly reports with IAMC at the same time as these reports are filed with DFO."

Canada's Fisheries and Oceans Department told National Observer's @mikedesouza on Wednesday that the company responded to the warning letter on June 12, the same day the news article was published about the environmental violations.

The company didn't say whether its response letter sent to the federal department on Tuesday was related in any way to the publication of the National Observer article on the same day.

The June 6 warning letter, sent to Trans Mountain expansion project vice-president David Safari, also indicated that DFO had failed to notice the violations for months, but discovered what was happening through email correspondence in late April. When asked why it took the government months to identify the problem, Sankey said that no one had previously raised concerns about the company's failure to deliver its monthly construction reports to members of the Indigenous Advisory and Monitoring Committee.

"DFO contacted Trans Mountain when it learned of the failure to provide monthly construction monitoring reports directly to the IAMC," Sankey told National Observer. "DFO discovered this failure through its ongoing compliance monitoring efforts. In April Trans Mountain committed to the IAMC to ensure the reports are provided as required going forward."

The department also said it was unlikely that the pile driving caused harm to any marine mammals since there were "observers onsite conducting visual monitoring for marine mammals during piling activities as required."

The department wasn't immediately able to respond to a question asking who the observers were and whether they had qualifications as scientists.

"The protection of our environment and the preservation of fish and fish habitat are top priorities for Fisheries and Oceans Canada," said Sankey. "As such, we take any issues of non-compliance very seriously. The warning letter served to ensure the proponent understood the potential consequences on non-compliance. Subsequent non-compliance may result in DFO pursuing escalated action, such as prosecution under the Fisheries Act."

Safari is one of two Kinder Morgan executives in Canada who will receive $1.5 million bonuses if they remain in their jobs over the next two years as a result of the deal announced on May 29, 2018 for the Government of Canada to buy the Trans Mountain Alberta-B.C. pipeline and related assets for $4.5 billion.

Trudeau questioned in Commons about violations

In the House of Commons on Wednesday, Trudeau was questioned about why the government made the offer to buy the pipeline in spite of the violations flagged by DFO.

"It had gone months without filing mandatory monitoring reports with the government and First Nations, and it exceeded safe underwater noise limits during expansion, endangering marine wildlife," said Jenny Kwan, NDP MP for the federal riding of Vancouver East, in the Commons. "Knowing about these violations and all the rest, why on Earth would the government bail out Kinder Morgan with billions of Canadians' hard-earned money?"

Trudeau responded by saying that Canada was losing billions of dollars every year due to the failure of the previous Harper government to deliver on a west coast pipeline that would allow Canadian oil producers to reach markets outside the United States.

"The NDP believes that this enormous cost should continue to apply to Canadians every single year," Trudeau told the Commons. "It is critically important that we diversify our export markets all the while making historical investments to protect our environment. While the NDP's plan is to keep Canadian resources locked into a single market, we are working to protect and create Canadian jobs while protecting the environment for future generations."

Eugene Kung, a lawyer with West Coast Environmental Law, a firm that is providing advice to the Tsleil-Waututh Nation in the Burrard Inlet, has questioned what will happen if the government follows through on its offer to purchase the Kinder Morgan Canada assets later this summer, as planned. Under that scenario, the government would then be placed in a situation where it might be forced to prosecute itself, Kung said in an interview on Tuesday.

But the fisheries department said that whoever owns the pipeline will still have to follow the rules.

"Conditions to reduce and mitigate harm to fish and fish habitat must be followed," Sankey told National Observer. "The Government of Canada will continue to monitor project construction. All standard project oversight processes will continue to be followed, including letters of non-compliance and enforcement action, if required."

Trans Mountain told National Observer in a statement on Tuesday that it was "aggressively implementing measures to avoid future non-compliance." It also said it provided information in response to requests for information from DFO, while noting that it also took steps to protect marine life.

"In the case described in the April monitoring report, it is key to note that each exceedance resulted in an immediate response by Trans Mountain," the company told National Observer. "In each instance, pile driving was stopped, the situation was assessed and further mitigation was undertaken."

And meanwhile Trudeau continues with his ad hominem lie about "losing billions of dollars every year". Harper must be proud of the imitation.

The excessive noise is also

The excessive noise is also extremely irritating for non-marine mammals in the area. The banging started up again yesterday afternoon, June 12. It started up again shortly after 9 am this morning, June 14, and is continuing as I write. It is louder than the radio, inside my house. I can not go for a walk or work in my garden. Can we get an injunction to stop it?