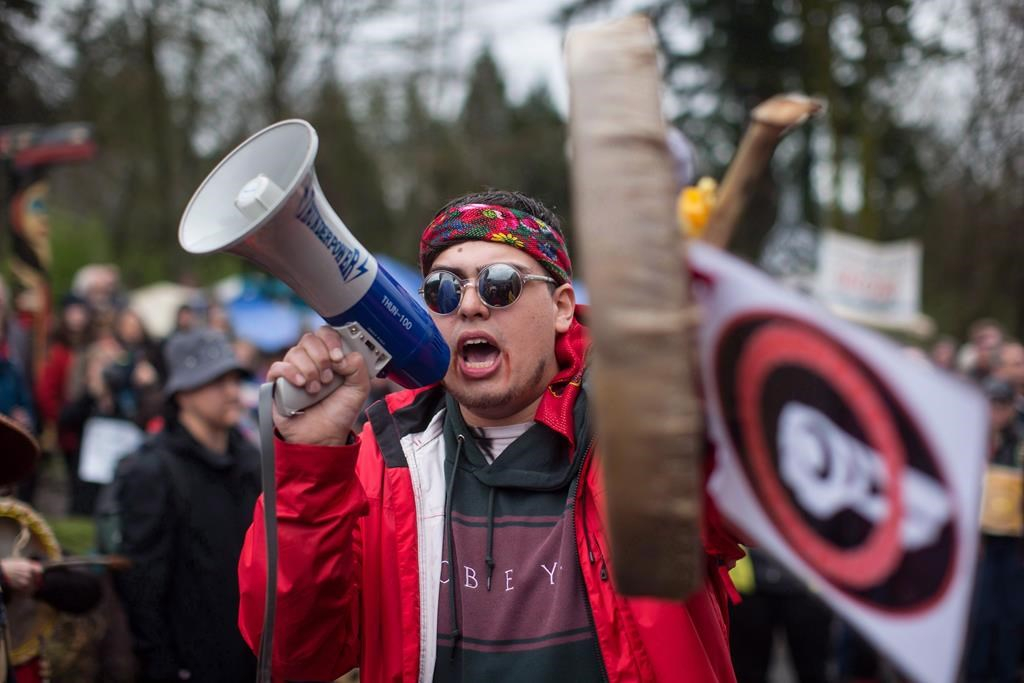 Cedar George-Parker addresses the crowd as protesters opposed to the Kinder Morgan Trans Mountain pipeline extension defy a court order and block an entrance to the company's property, in Burnaby, B.C., on Apr. 7, 2018. File photo by The Canadian Press
Previous story
Next story

Cedar George-Parker remembers the moment he decided to devote his life to defending Indigenous people and their traditional territories. It was the one-year anniversary of a shooting at his high school that killed four of his classmates in Marysville, Wash.

"I dropped to my knees and I said, 'I'm going to make a change in the world,' " he recalled.

George-Parker is among the Indigenous protesters in Washington state promising to fight the Trans Mountain pipeline expansion. Activists call the project the Standing Rock of the north, comparing it to the fierce Standing Rock Sioux protests that stalled the Dakota Access Pipeline for months.

The Trans Mountain expansion — recently bought by Canada for $4.5 billion — doesn't only affect Canadian waters or land. The project will increase tanker traffic seven-fold in the Salish Sea, which borders British Columbia and Washington, and Kinder Morgan has noted the expansion potential of a connected 111-kilometre pipeline that runs from B.C.'s Fraser Valley to Washington refineries.

Many Indigenous activists trace their roots to both sides of the border. George-Parker's father is from North Vancouver's Tsleil-Waututh Nation and his mother is from Washington's Tulalip Tribes. He travels to B.C. often and in April disrupted a speech by Prime Minister Justin Trudeau in Vancouver.

"Our people never had borders," he said. "We still try not to let borders separate us."

The 2014 shooting at Marysville Pilchuck High School deeply affected George-Parker, now 21. He found it outrageous that governments subsidize big business while underfunding education and counselling for young people. Canada's purchase of Trans Mountain is the latest example of wasted government money, he said.

Even though Inslee opposes the expansion, some protesters in his state don't feel supported. Police arrested Janene Hampton in January and charged her with criminal trespassing after she and several other Indigenous women camped on the state capitol lawn to protest resource projects including Trans Mountain.

Hampton also camped at the Standing Rock protest for months. She joined the movement against pipelines to protect the water, said Hampton, a member of the Colville Okanagan Tribe, which has traditional territories spanning B.C.'s southern Interior to northeast Washington.

"One of the big fights for us as Aboriginal people is the whales," she said, adding they use sonar, and existing vessel noise has already disrupted their communication.

Canada's $1.5-billion oceans protection plan includes $7.2 million to increase the use of technologies that monitor underwater noise. It has also announced other steps to support the recovery of the endangered southern resident killer whale population, which lives in B.C. and Washington waters.

The Canadian government often touts its oceans protection plan as "world-leading," but as recently as May 2017, officials in Washington raised questions about Canada's preparedness for an oil spill.

Washington required Kinder Morgan to conduct a worst-case scenario exercise. The company simulated a spill of 3,024 barrels of heavy synthetic crude oil in the Sumas River, which runs from B.C.'s Fraser Valley to Whatcom County, Wash.

In a report following the exercise, state ecology department staff wrote that Kinder Morgan brought together a skilled spill management team including staff from U.S., Canadian, B.C. and Washington government agencies. But the report also said non-floating oil tactics planned on the Washington side were not planned on the B.C. side, and Canada did not discuss the type of equipment it would use to clean up a major spill.

The exercise was conducted to meet U.S. regulatory requirements and was not focused on the Canadian response, said James Stevenson, a spokesman for the National Energy Board. A joint U.S.-Canadian plan to respond to cross-border spills exists but was not activated during the May 2017 exercise, he said.

Canada's purchase of the project includes the Puget Sound pipeline, a 111-kilometre line that diverts from the existing Trans Mountain pipeline in B.C. and carries oil to four Washington refineries. Environmental groups now fear an expansion to the Puget Sound line, citing 2017 financial disclosure documents in which Kinder Morgan touted the potential for increasing capacity.

"That is definitely a big concern," said Rebecca Ponzio, campaign director for Stand Up to Oil, a coalition of U.S. groups that oppose new oil terminals and coastal exports.

Canada's Department of Finance did not directly answer a question about whether it would consider expanding the Washington line, but it said it planned to follow Kinder Morgan's 2018 construction schedule for the expansion of the pipeline in B.C. and Alberta.

Trans Mountain, a subsidiary of Kinder Morgan, said market conditions dictate how much crude oil is transported through the Puget Sound pipeline. While the line could be expanded, the company expects the majority of the expansion capacity from the Trans Mountain project will be for export from a marine terminal in Burnaby, B.C.

But protesters won't allow construction on the expansion to proceed without a fight.

"That pipeline will never go through," said Paul Wagner, a member of the Saanich First Nation who lives in Redmond, Wash., and goes by the traditional name Cheoketen.

"The people are rising up."

Thank you to First Nations on

Thank you to First Nations on the American side of the colonial border for backing up all of us, First Nations and settler alike on this side, to make sure this pipe dream is never built!