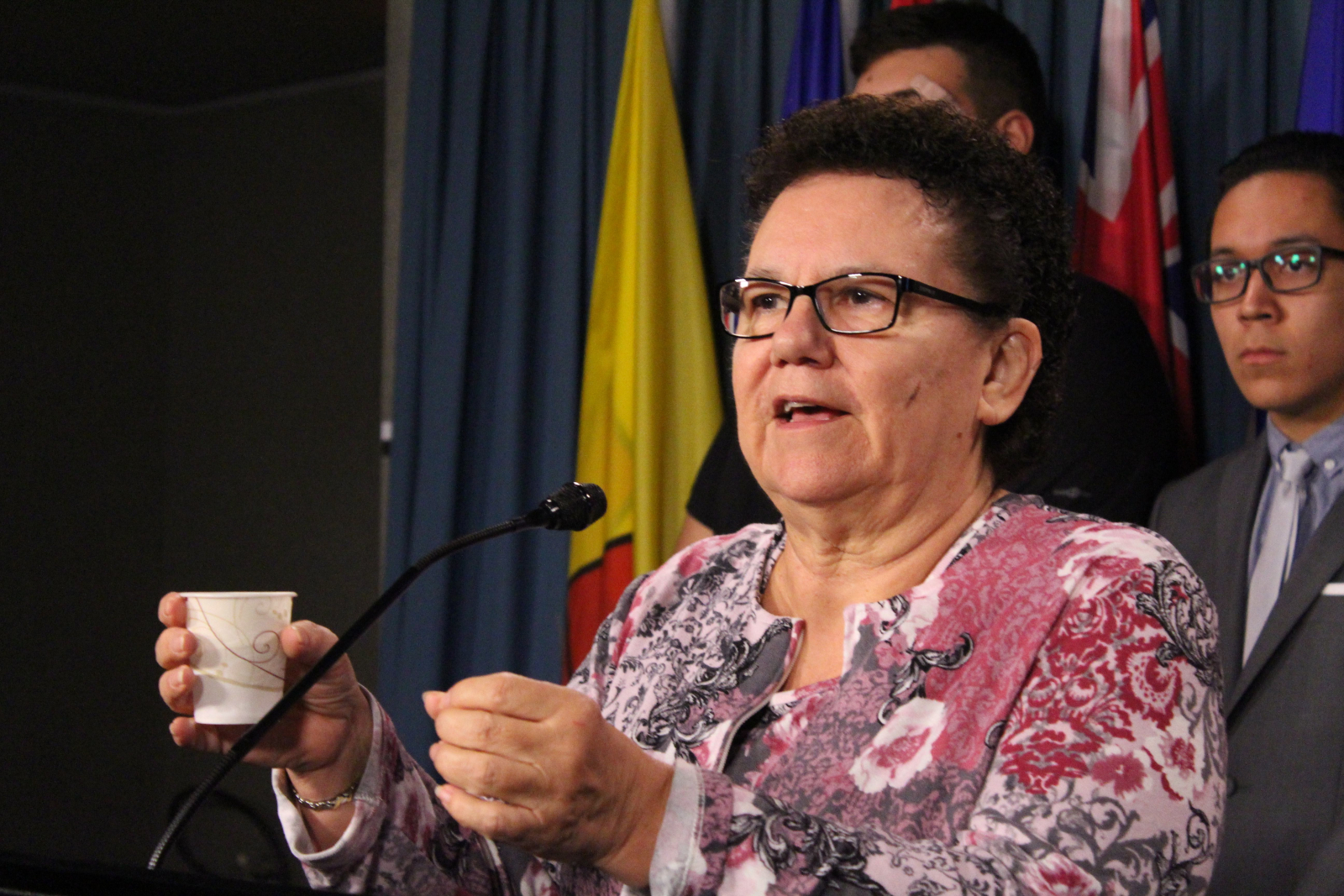 Maureen Thomas, chief of the Tsleil-Waututh Nation, is still hopeful that Prime Minister Justin Trudeau's government will respect the rights of her people.

She travelled to Ottawa on Monday for a last-minute appeal, fearing that part of her nation's traditional territory, the Burrard Inlet off the coast of Vancouver, is on the verge of being forced by the Trudeau government to accommodate droves of oil tankers. She said this would put the area at risk for "generations."

"We're fighting for the survival of the Tsleil-Waututh Nation," Thomas told reporters at a news conference following her meeting with Carr.

The government and Canada's oil industry have argued that projects such as Kinder Morgan's proposed Trans Mountain expansion are critical to promote jobs and growth in a sector that has been slumping since global oil prices crashed in 2014. They say the project would create new markets for Canadian oil in Asia.

But a ministerial panel, appointed by Trudeau's government, has also warned that the economic shocks which disrupted the industry occurred after Kinder Morgan first proposed its expansion project and have shifted the dynamics of its viability for oil companies.

The appeal from Thomas' delegation also comes as major oil companies admit that global demand for oil may start to drop after 2020, as cleaner forms of energy start to expand their share of the market.

"The conditions that prevailed when the project was first proposed have changed, and many of the circumstances that may affect the need for — and impact of the project over time are also uncertain,” said the panel's final report submitted to the government this fall.

Jim Carr "enriched" by his relationship with the Tsleil-Waututh Nation

After the meeting, Carr said he had learned from his recent discussions with the Tsleil-Waututh people, and that he believed that all Canadians could learn from their teachings.

“I have been enriched by my relationship with the Tsleil-Waututh from the moment I met them... and I understand very well the sacred relationship that the Tsleil-Waututh feel with the air, the water and the land," Carr told reporters outside of the House of Commons. "It is a value, and a lesson and a teaching that I think could be important for all Canadians, not just Indigenous Canadians.”

Thomas also submitted a series of new reports outlining why she said the government should extend its review of the Kinder Morgan project to evaluate all of the evidence.

"The Project, if approved, would constitute a serious, unjustified infringement of our Aboriginal title and rights in Eastern Burrard Inlet for generations to come," Thomas wrote in a letter dated Nov. 25 and addressed to Carr and other members of Prime Minister Justin Trudeau's cabinet. "It would expose our people and our territory to serious risks associated with oil spills and other concerns related to marine shipping, all of which we have communicated to your representatives and substantiated with scientific studies."

But Carr added that he also has understood from his series of meetings with them in Vancouver, on their traditional territory and in Ottawa that they feel a "generational responsibility for those who came before and those who come after, to leave the planet a better place, to leave their own back yard a healthier place than they inherited." He said he agrees with these values.

Chief Maureen Thomas of the Tsleil-Waututh Nation speaks to National Observer in Ottawa on Nov. 28, 2016. Video by Mike De Souza.

Canada's oilsands producers can tap into the world's third largest reserves of crude oil in Northern Alberta, but they struggle to compete because of high costs and energy consumption that make the industry the country's fastest growing source of greenhouse gas emissions.

A recent special report in The Economist made the case that "the world needs to face the prospect of an end of the oil era." It also said that the high costs of oilsands production make it more likely that Alberta's reserves, considered to be the third largest in the world after Saudi Arabia and Venezuela, might have to stay in the ground.

"Analysts who think that the Paris accords will mark a turning point in global efforts to reduce carbon dioxide emissions say global oil consumption could start to wane as early as the 2020s," The Economist said in its report. "That would mean companies would have to focus exclusively on easy-to-access oil such as that in the Middle East and America's shale-oil provinces, rather than expensive, complex projects with long payback periods, such as those in the Arctic, the Canadian oil sands or deep under the ocean."

Some scientists have also questioned the quality of the federal review completed by Canada's National Energy Board, saying it neglected to adequately consider the latest scientific research.

Thomas' letter said she expects ministers like Carr to do more than just meet with her nation if they are sincere about respecting the right of Canada's First Nations to get free, prior and informed consent on major decisions. This right is enshrined in the United Nations Declaration on the Rights of Indigenous Peoples, recently accepted by Canada.

"If the Federal Cabinet directs that the Project be approved, against our informed withholding of consent and without taking the steps we have outlined in this letter, it would reopen the many wounds we have suffered as a result of the Crown’s historic disregard for our Aboriginal title and rights, including in relation to the Project’s predecessor facility," Thomas said in the letter. "Quite frankly, such action would risk jeopardizing and irreparably harming our nation-to-nation relationship for some time to come, possibly for generations."

Thomas and her delegation said they were looking at all means to continue their fight if the government proceeds as expected with the project approval. This would include court action or other measures, they said.

But she added that she has faith in Prime Minister Trudeau because of the commitments he has already made to First Nations, and wants to work with him on a resolution.

"Now is the time to continue trying to find a way to continue those talks, while he's in the position that he is," she told National Observer in an interview on the steps of Parliament Hill. "Otherwise, down the road, if we get a new prime minister who has other ways of thinking about Indigenous people, it may be more challenging, so now that window is open, where we should do our best."

Could it be that another of

Could it be that another of Canada's most valuable resources; fresh potable water is a primary product to be shipped by pipelines to tide water?? The fresh water / groundwater markets that operate in an informal structure within the oil industry are also part of Canada's economic well-being in near future. In Alberta the Water Act is regulated by the AER (Alberta Energy Regulator) which has been a primary legal framework for resource development in Alberta - and an often copied model for resource extraction across Canada. Approximately one-third of wells registered on the AER information site are being drilled for water.

To ask the question of Canadians if it "is reasonable for the oil industry to also sell fresh water into the global markets" would resistance to such sales exist to the point of stopping the building of pipelines for such resource distribution in Canada be foreseen?? Would Canadians really care if Nestle and global energy industry combined to sell this precious sacred life necessity with reckless prodigality for life be allowed??

What guarantees and laws would stop such profiteering on such water exports?? To contemplate such scenario maybe an underlying issue "or even the elephant in the closet" that in denial in tough economic times may be sold out from under our noses before the dry thirsty days ahead. Pipelines have been providing water markets in Canada longer than they have been transporting oil and gas.

Just wondering here in the wilderness of Alberta