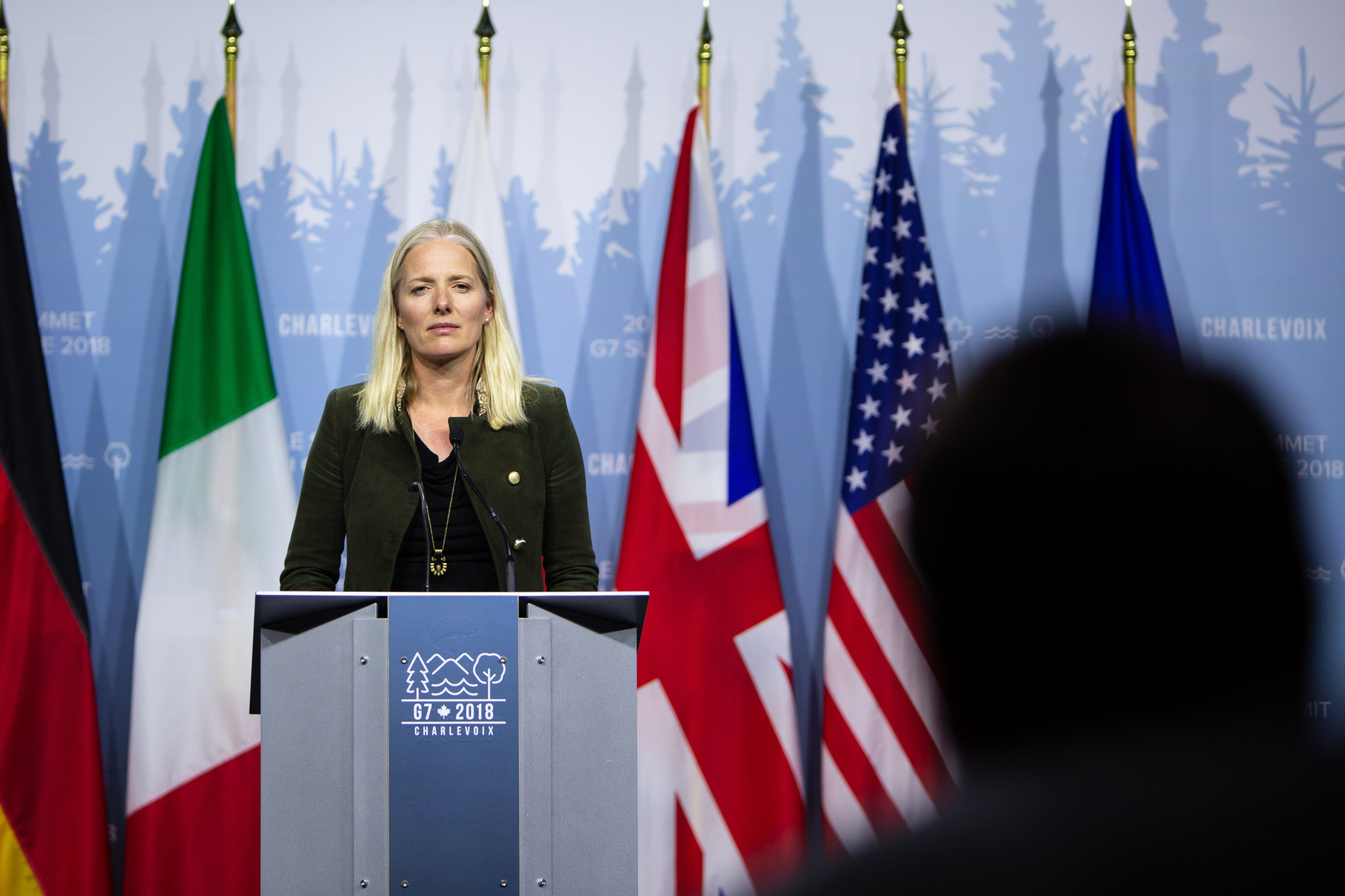 The federal government should publish its full review of fossil fuel subsidies as it works toward phasing them out, says an Ottawa-based corporate watchdog.

Environment and Climate Change Canada is currently poring over all federal non-tax measures that support the oil and gas industry, as it prepares to deliver on a climate-friendly G20 promise to eliminate the "inefficient" ones by 2025.

Two reviews are now underway. The government says one review is looking at federal non-tax measures that support fossil fuel production and use.

“On this, next steps, including public reporting, will be determined once Canada has completed its review of non-tax measures with respect to the G20 commitment and finalized details of the international peer review process with Argentina,” said spokeswoman Christelle Chartrand in an email sent to National Observer on June 22.

The department said its second peer review, part of a peer review with Argentina, would ensure both countries are “on track to phase out inefficient fossil fuel subsidies” and that it was expecting to report publicly on its findings.

Natural Resources Minister Jim Carr was in Argentina last week, where each party agreed to conduct a study on how much the other country subsidizes the fossil fuel industry.

Above Ground, a non-profit that aims to improve corporate accountability and access to justice in Canada, has been urging the government to be transparent about its findings. It has asked the department to make more concrete commitments to publishing all reviews in full.

According to the Office of the Auditor General, "a subsidy is a financial benefit given by government to support taxpayers." In the case of the fossil fuel industry, this may include special tax deductions or reduced property taxes for oil and gas producers and consumers, or non-tax measures such as government grants and contributions.

"I think it’s important for the public to know how much money Canadians are providing in support to fossil fuel companies," said Karen Hamilton of @AboveGroundNGO. #cdnpoli #climatechange #cdnecon

As it stands, the federal government hands out hundreds of millions of dollars in tax-based subsidies to the oil and gas industry, through a handful of credit programs such as the Canadian Development Expense, the Canadian Exploration Expense, the Deep Drilling Credit and the Atlantic Investment Tax Credit.

Lesser known however, are the federal goverment's non-tax measures, which also include "government loans or loan guarantees at favourable rates, resources sold by government at below-market rates, research and development funding, and government intervention in markets to lower prices."

Environment Canada's initial uncertainty about publishing its complete review of such financial supports had raised a red flag at Above Ground, which argues that Canadians have the right to review how the federal government delivers its climate change promises, including the pledge to phase out inefficient fossil fuel subsidies.

"I think it’s important for the public to know how much money Canadians are providing in support to fossil fuel companies, whether that’s through tax or non-tax subsidies," program officer Karen Hamilton told National Observer in an interview.

Above Ground is particularly concerned that any subsidies provided by Export Development Canada, the country's federal credit agency, would remain shrouded if parts, or all of the review were kept secret.

Export Development Canada (EDC) helps Canadian companies extend their international reach by providing insurance, financing and guarantees to banks. It operates at arm’s length from the federal government, but ultimately reports to Parliament through the minister of international trade.

Last year, the credit agency helped facilitate $10.4 billion in exports in the oil and gas sector, representing 10 per cent of all exports and international investments it facilitated that year. It is also the largest financier of clean technology in Canada.

In March, International Trade Minister François-Philippe Champagne assured Above Ground in a letter that EDC "has been included" as part of the government's review of non-tax subsidies provided to the fossil fuel industry, which includes everything from digging up coal to shipping crude oil through a pipeline.

According to EDC, it "does not provide subsidies," as it operates commercially and is committed to market-based pricing. The agency is also confident that under the government's review, its support for the oil and gas sector would not qualify for the phase-out.

"Although we wouldn’t want to speculate on the results (of the review), EDC is confident that our support will not be considered 'inefficient' given our commitments to market-based pricing and the international commitments that EDC and the Government of Canada hold at the WTO (World Trade Organization) and OECD (Organisation for Economic Co-operation and Development)," wrote EDC spokeswoman Shelley MacLean in an emailed statement.

The International Trade Department has not clarified whether in the course of its review, it has determined whether EDC's support for the oil and gas industry qualifies as a non-tax subsidy, or whether it is "inefficient." It redirected media requests on the subject to Environment and Climate Change Canada, which in the past, has redirected requests about EDC to the International Trade Department.

Above Ground, which also noted that the government has not clarified what it considers "inefficient" either, said a number of arguments could be made that EDC's loans, guarantees and other financial supports for the industry are indeed subsidies.

"It seems to me in discussion with folks across the board that there’s an undisputed portion of public finance that is considered a subsidy. That undisputed portion is what is given below the market rate...There’s a benefit provided through this financing that is different from going to a regular bank," Hamilton explained.

"That's one argument. But then there’s also the other argument that this isn’t just a regular bank providing financial support. This is through the Government of Canada, through Canada’s export credit agency. In that case, the other argument is that the support has, to a certain extent, government endorsement that goes beyond the dollar value, and that that government endorsement needs to be taken into consideration."

Above Ground asks, added Hamilton, that the government review the Crown corporation's support for the sector thoroughly, and publish those results, so that the Canadian public may keep abreast of the ways their dollars prop up oil and gas. ​

The spotlight on Environment Canada's publishing question comes after a series of criticisms of Canada's progress on the promise to kick inefficient fossil fuel support to the curb.

Last year, a scathing auditor general report found that Ottawa had not yet developed a strategy to phase out the inefficient subsidies by 2025, despite making the initial promise in 2009, placing it in the mandate letters of both the environment and finance ministers in 2015, and reaffirming it again in 2016.

The auditor general, Michael Ferguson, also noted that the Finance Department had refused to share information about how the government was keeping its promise to phase out the subsidies.

Last month, a dozen of Canada's most well known and influential environment groups also flagged lack of action on fossil fuel subsidies in a report card on the government's efforts to deliver on its environmental promises.

Canada also received a poor grade for transparency about its subsidies.

Environment Canada was not able to provide an expected completion date for its self-review of non-tax fossil fuel subsidies.

Editor's Note: This article was updated at 10:41 a.m. Eastern on Wed. June 20, 2018 to include additional quotes that provide clarity on Above Ground's position.

Mr. Trudeau has his members

Mr. Trudeau has his members of the federal liberal government very well trained. Their collective facial look of arrogance is disgusting. He is certainly not my PM. She is certainly not my environment minister. Canada deserves much better. May the October 2019 federal election bring us back to democracy. We couldn't stand another four year term of divisive politics.

Sounds very familiar. The Alberta Energy regulator is also "unable to provide a date" for release of its recent study of gases going to flare stacks from fracked wells in Alberta.

In 2015, leaders of the UK, US, Canada, France, Germany, Italy, Japan and the EU "urge" all countries to join them in eliminating support for coal, oil and gas by phasing out "inefficient fossil fuel subsidies" in the next decade. The statement did not define precisely what the G7 consider to be a subsidy. The word "inefficient" in the G7 text indicates subsidies that distort energy markets.
The OECD estimates that this type of support for fossil fuels within its member states is between $160-200 billion each year (around $3.3 billion for Canada). In 2013, the International Energy Agency (IEA) estimated fossil fuel consumption subsidies worldwide at around $548 billion.
But when the cost of damage from pollution and climate change is factored in, the International Monetary Fund (IMF) has estimated that support increases to a staggering $5.3 trillion a year, or $10 million per minute. (this is more than the total global spend on human health).
In 2013, the International Monetary Fund (IMF) released a paper titled, "Energy Subsidy Reform: Lessons and Implications." In it, they identify $26 billion per year in Canadian tax payer subsidies to the oil, gas and coal industries, and state that "subsidies crowd out priority public spending, and depress private investment, including in the energy sector. Subsidies also distort resource allocation by encouraging excessive energy consumption, artificially promoting capital-intensive industries, reducing incentives for investment in renewable energy , and accelerating the depletion of natural resources.
In the same document the IMF gives extended explications about the negative effects of fossil fuel subsidies and the fiscal and economic costs to most regions of the world. It also shows the effect on global warming resulting from the over-consumption of fossil fuels, and how eliminating those subsidies would generate substantial environmental and health benefits. Energy subsidies are also highly inequitable because they mostly benefit upper-income groups.
Trudeau should provide copies of this IMF paper to his ministers.