Travel writing? Climate change? Here's a book that does it all 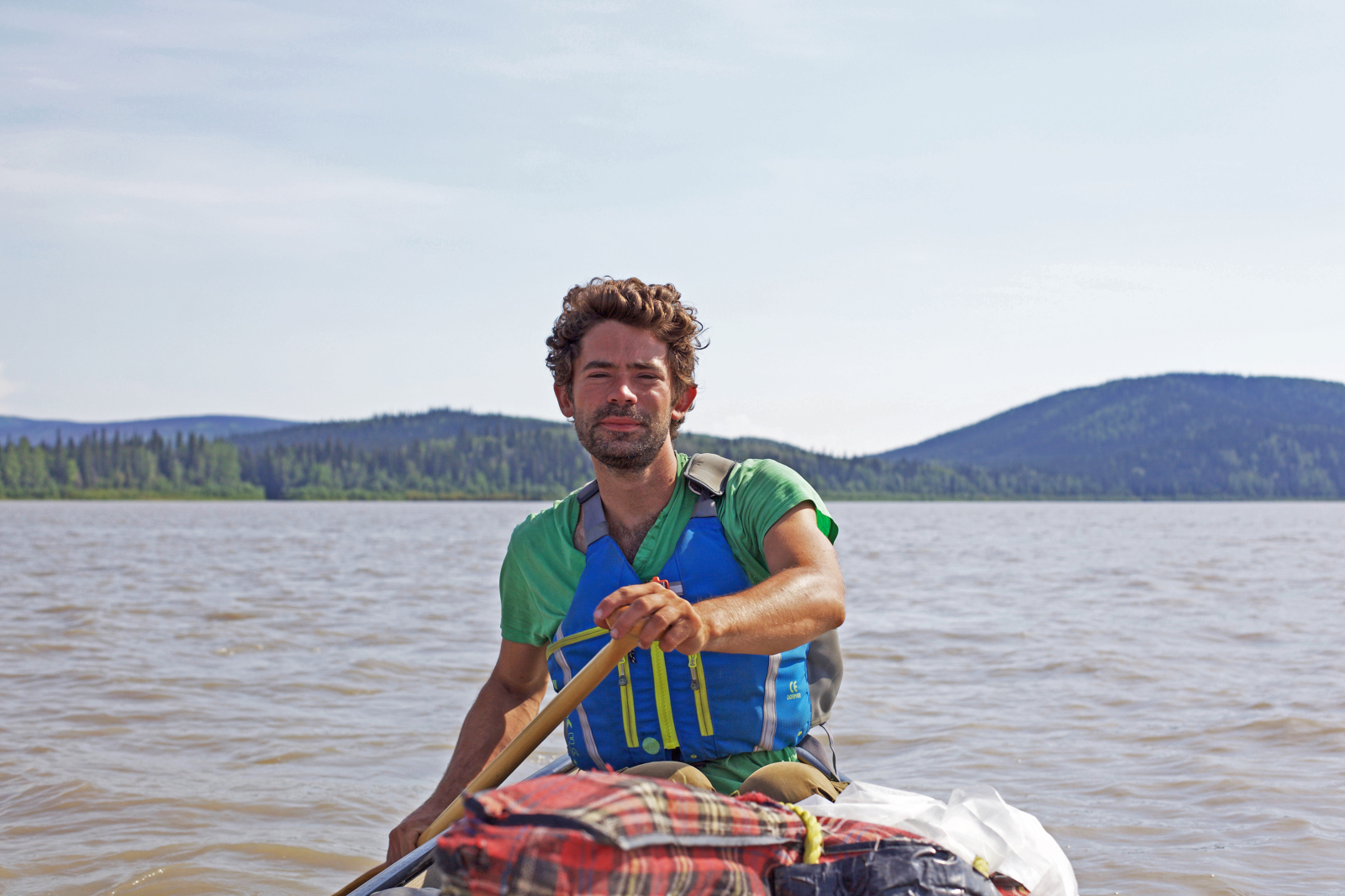 Adam Weymouth, author of "Kings of the Yukon: A River Journey in Search of the Chinook" canoeing down the Yukon River. Photo provided by Adam Weymouth
Previous story
Next story

In his brilliant book, Kings of the Yukon: A River Journey in Search of the Chinook, author Adam Weymouth takes us along in his canoe down the full length of the Yukon River.

“I paddle out of Eagle, and then drift ten miles of space. There is a beautiful monotony to the infinity of trees, the same conservative palette of greens and browns and greys and blues. There are flashes of colour, lupines and vetch, in the dark scrub of the banks. The weather changes, changes…”

It is a journey of 2,000 miles (3187 km), a journey of smells, shifts of light and colour, storms and sunshine, wistfulness, fear, and ultimately, admiration for the mighty King salmon. But it is equally, if not more, the story of the people who live along the river, and of interconnectedness, or as Weymouth says, interlinking.

Weymouth lives in London on a 1904 Dutch boat, moored to the side of the River Lea. When I talked to him via Skype, a coot chick had just hatched on the bow of his boat. I couldn’t help think of how salmon linked us. In Vancouver, eating salmon is part of our everyday lives. Here, there is an awareness that they are under threat, yet we see them running our rivers. In London, they are long gone from the rivers, and now are flown in, plastic wrapped, tinted with red dye to make them appear more appealing.

“How would you describe your book ?” I asked Weymouth. “Journalism, travel writing, natural history?” Ordinarily I wouldn’t ask a writer to classify his or her book, but this book is unusual, equally about nature, environmental precariousness, and people’s stories.

He laughed, and said that bookstores are struggling, too.

Interestingly, the salmon is not what drew Weymouth to the Yukon River. Instead it was the lure of the Great North, sparked by his early readings of Jack London and Farley Mowatt; a general fascination with migration; a past besmirched with unsettling experiences of direct action around climate change; and a trial in Bethel, Alaska.

In 2013, Weymouth traveled to Alaska as a journalist looking for a story of climate change and resource extraction and came upon the trial of 23 Yup’ik fishermen charged with catching King Salmon during the fishing closure of 2012. The fishermen were defending themselves based on first amendment rights to their culture and religion. “It seemed to me, at that point, that there were these two very different ways of understanding the world being forced up against each other,” said Weymouth.

He wrote an article about the trial for The Atlantic Magazine, and began planning his return to the Yukon River. His epic journey began at Canada’s Lake MacNeil, and ended at the Pacific Ocean. Along the way, he was joined by his partner, Illi Mattsson.

Facts about the Chinook, local and national history, and personal stories are seamlessly woven throughout the book. He writes like Annie Dillard, Bruce Chatwin and Jack London combined: suspenseful and sensitive storytelling and sumptuous descriptions.

Review of a brilliant book about the plight of the Chinook and people who live along the Yukon River, plus an interview with author @adamweymouth. Kings of the Yukon: A River Journey in Search of the Chinook in @natobserver

While Weymouth canoed down river, the Chinook battled upstream, averaging 50 miles (80 km) a day, on the longest run of any salmon in the world.

“…eyes wide, unblinking. Thirty, forty, fifty pounds of flesh, many thousands of them. Their backs speckled from frogspawn, the blush of their bellies, where the silver of their flanks fades into a deep and meaty rose. Jaws gawping, lips beginning to curve in up on themselves like pliers, propping their mouths ajar so that the river flows right through them, and yet for the rest of their lives these salmon will not eat, they will not drink.”

Salmon have captured the imagination of many cultures, their Sisyphean attempts likened to our own, their migration uncanny, their lives at sea mysterious. As Weymouth writes, “They travel further than science can reach…”

Weymouth connects people to their land

Like the salmon, Weymouth gravitates to pilgrimages. He has walked through Scotland, talking to sheepherders and others about the reintroduction of the wolf there, and from England to Istanbul just because he wanted to see what that was like. The Yukon River seems a logical progression.

While many wilderness seekers deliberately avoid contact with people, Weymouth connects people to their land. He visited fish camps and small communities, was taken into smokehouses and commercial businesses, and talked to scientists, youth and local tour guides. Everywhere, he was offered hospitality and food, lots of salmon, and such other local delights as “roast beaver, goose soup, moose heart soup, baloney sandwiches, iced cake and Hershey’s Kisses.”

The Chinook, or king salmon as they are known in the U.S, are disappearing, and unless fishing them is radically reduced or stopped, they will likely vanish from the Yukon River. The culprits include commercial fishing, dams, pollution, the warming of the ocean and fish farming. Writes Weymouth: “The historic average, before 1997, had been 300,000 fish. In 2013, 37,000 fish came back.”

There are fewer kings, and they are getting smaller, which means females have fewer eggs. Once the Chinook reached 80 pounds (36.2 kg), but the average is 7.3 pounds (3.3 kg) today, Weymouth learned from Stan Zuray, who helped count Chinook along the Yukon for a U.S. federal study. They are also younger than they used to be when they stayed at sea for seven years. Now only one per cent stay that long.

Fishing the Chinook has been restricted to redress losses. Still, it is believed it could take between 50 and 100 years for them to return to healthy numbers. A chain reaction occurs throughout nature as the salmon diminish. Grizzlies have fewer cubs, bald eagles fewer chicks, songbirds fewer insects on which to feed, and forests die.

In that ecosystem are humans. People along the river are losing food they have subsisted on for tens of thousands of years and also their communities and culture that cohere around fishing rituals. As the two worlds collide, one is being crushed.

“In Alberta they’re squeezing oil out of sand. Now they poisoned the big river. The sea is dying,” Henry Percy, who is one of two surviving speakers of the Han language of the Tr’ondek Hwech’in people, told Weymouth. “We can’t stop it now, too far. We all up shit creek.”

Percy, who is 89 years old, fishes and lives near Dawson Creek. Not only has he witnessed the effects of over fishing for commercial purposes but he has seen how generations of his people have been affected by the Gold Rush of 1897. He tells Weymouth stories about how species help each other survive, an ability he says humans seem to lack.

At the book’s heart is Mary Demientieff, who has a fish camp half a day’s paddle down river from Ghost Creek Slough beneath Tabernacle Mountain. Mary, who is now 84, grew up with traditional ways. She was sent to boarding school, then returned to the river and the fish at the age of 17 with her new husband.

“Mary Demientieff…walks with her hands behind her back, her whole body angled forward, and she moves across the yard as though toppling forward, a continual upsetting and restoration of balance in each step….Her eyes have the same glint as her great-grandaughter’s, her cheeks round and bright, her face softened but not wrinkled.”

She is the matriarch of a family that is “the length of the river, the breadth of the state,” with 10 children and their children and children’s children. As with every person’s story, Mary’s is bracketed by the salmon. In her case, salmon that have spawned out.

“Clouds of fish, puffy, airy, scabrous, drifting across the surface. A few of them dying but most of them dead, pale, ridged, just a tail or a nose protruding from the water. Tangled in the submerged reeds, faces locked in disbelief.”

It is no coincidence that Mary’s story rests where it does. Weymouth is showing the reader that the salmon are like us and vice versa. “These are the people that…are reaching the end of their lives and still searching for what that purpose is.”

Mary talks to Weymouth light heartedly about her years at the boarding school, but Weymouth detects a darker tale. Through his research, he learned that an estimated 80 per cent of the children who attended the same school as Mary were abused. Weymouth said it is too simplistic to blame the plight of the people only on the lack of fish. “Too many terrible things have been happening there.”

In his 20s, Weymouth was arrested with others for conspiracy to shut down a coal-fired power station. The trial that followed lasted a month, and included expert witnesses such as the leader of the Green Party in the UK, and James Hansen from NASA, the U.S. National Aeronautics and Space Administration. With all the evidence presented, the jury, nonetheless, unanimously found all of the accused guilty.

Weymouth knew something was wrong if all this evidence couldn’t convince people of the harm caused by burning coal. He left direct action, and turned to his writing. And this book is perhaps one of the most effective climate change stories I’ve read. He thinks the growing success of the green movement comes from connecting climate change to poverty, and race, and even feminism.

I asked him what would happen if we stop fishing the Chinook on the Yukon River?

“In 100 years, yeah, we might have a great salmon run and that would in many senses be fantastic but how … you privilege culture over species…in a human ethnological perspective, it doesn’t make sense to separate those parts out because it is a part of this bigger whole that the people and the landscape and the politics is all interlinked.

Kings of the Yukon: A river Journey in Search of the Chinook was published by Alfred A. Knopf, Canada.

Immigrant couple donates $60M fortune as Arctic prize: 'It's really all we have'