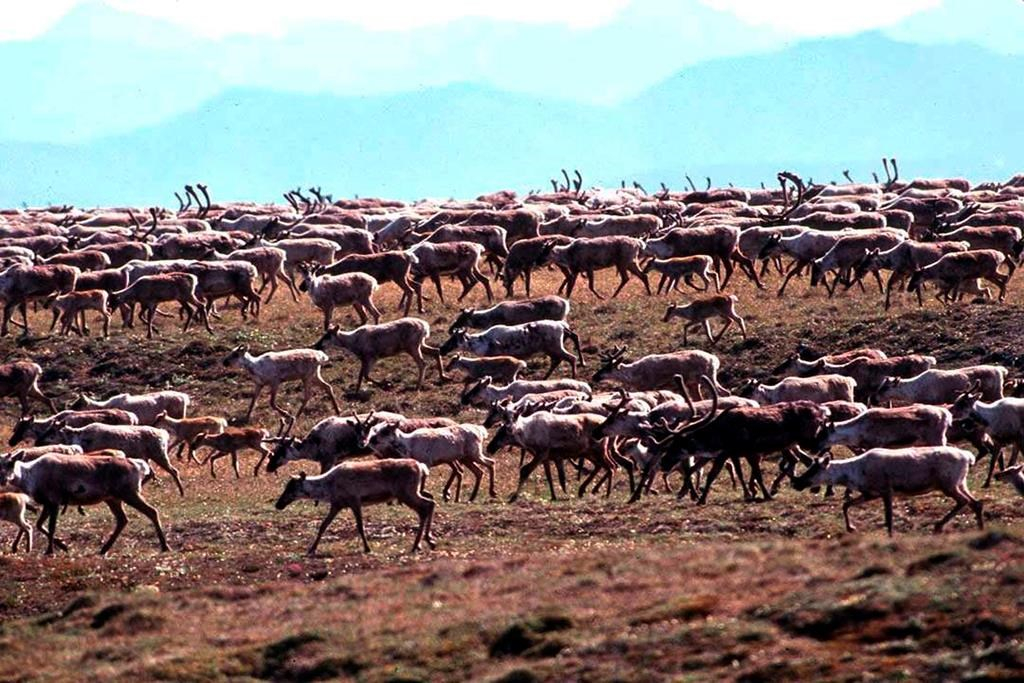 In this undated file photo provided by the U.S. Fish and Wildlife Service, caribou from the Porcupine Caribou Herd migrate onto the coastal plain of the Arctic National Wildlife Refuge in northeast Alaska.
Previous story

Three levels of Canadian government say they will oppose the latest attempt to open the Alaska National Wildlife Refuge to oil drilling.

"The federal, territorial and Indigenous governments in Canada are united in their commitment to conservation of the herd and its habitat."

Last Friday, the U.S. opened a 60-day public comment period before environmental hearings on allowing drilling on the calving grounds of the Porcupine caribou herd.

The herd is the largest and healthiest in the North and one that is considered crucial to the physical and cultural health of Indigenous people in Canada's northwest.

The animals are protected under a U.S.-Canada treaty, which commits both nations to preserve it. While it calves in Alaska, the 218,000-strong herd spends most of its time in Canada.

Caribou is a regular part of the diet of Gwich'In people and remains key to their culture.

The governments of Canada, Yukon and Northwest Territories, as well as several First Nation governments, met in Inuvik, N.W.T., last December to discuss fears the refuge would be opened. They all signed an agreement promising to fight to uphold the treaty.

"We, the parties, reaffirm our commitment to co-operate to take action to achieve effective conservation and management of the Porcupine caribou population throughout its range, specifically the conservation of important calving areas," the agreement said.

Yukon Environment Minister Pauline Frost said her government will fight any attempt to allow industrial activity in what is one of the most pristine areas left in the U.S.

"We do not want to proceed with development. We in Yukon are taking a very strategic and proactive approach to protecting the Porcupine caribou herd," she said. "We have a treaty obligation that the U.S. has committed to."

The N.W.T. is also preparing a submission to the Alaskans.

"Some of the areas we would look for in the (environmental impact study) would be full consideration of potential impacts on the Porcupine caribou herd, polar bears, migratory birds and grizzly bears, allowing adequate time for consultation and respecting obligations established in international agreements and land claim agreements," said a statement from Environment Minister Robert McLeod.

Babcock pointed out Canada has established two national parks in an effort to protect the herd.

Frost, a Gwich'In herself who represents a riding where people depend heavily on caribou, said her people began fighting the latest attempt to open the refuge as early as last fall, when the U.S. Congress was considering the bill that eventually allowed it. Band representatives were in Washington to ensure legislators understood Canadian concerns, she said.

But it's not a new fight. The Gwich'In have been lobbying Americans to keep development out of the refuge for 30 years.

"It was 20 years ago when I was sent off on a lobbying effort to the United States," Frost said.

"I (spoke) for three weeks straight every day. The young people of the community are as committed today as we were back then. We will continue to advocate and fight for protection."