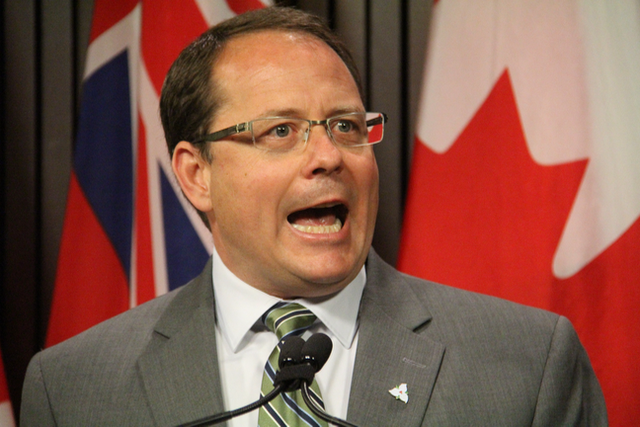 Ontario's incoming premier is being advised to act responsibly as he follows through on a promise to pull the province out of an international cap and trade agreement.

Hours before Progressive Conservative Leader Doug Ford was to be sworn in, Green Party Leader Mike Schreiner said the new premier should make sure he has an alternate plan in place so that Ontario residents don't wind up paying for the changes in government policy.

"I think he can do it and I think the new cabinet can do it in a way that is responsible," Schreiner told reporters on Thursday.

While Ford has stated he believes in human-created climate change, he has yet to announce a full plan to deal with it, and actions will speak louder than words, Schreiner said. He urged Ford to work with him on an alternative program that would charge carbon emitters fees and redistribute the funds to consumers.

“It’s one thing to say you’re opposed to something and to say you’re going to essentially kill it,” said Schreiner after reading aloud from an abridged version of an open letter he penned to Ford. “But if you don’t have an alternative plan in place, then essentially you’re denying action on the biggest crisis we currently face.”

Schreiner spoke almost two weeks after Ford announced one of his government’s first plans is to scrap Ontario’s cap-and-trade program, withdrawing from the carbon agreement between Ontario, Quebec, and California as soon as his party is sworn into government this Friday. Quebec stopped trading with Ontario right away.

"Pollution pricing is essential and it is coming, whether by Ontario’s design or by the hand of the federal government."

Ford also recently announced he would cancel the Green Ontario Fund, which reimbursed Ontarians for green-fitting their homes.

While @FordNation has stated he believes in human-created climate change, he has yet to announce a full plan to deal with it, and actions will speak louder than words, @MikeSchreiner said.

“How is it going to save us money to subject us to what some legal analysis are saying is potentially $2 to $4 billion in costs, plus an additional $100 million in legal costs?’”

The new Guelph MPP suggested that Ford should consider replacing the energy rebates with “a more transparent and accountable eco energy audit program that can help people save money by saving energy.”

“I don’t think that people of Ontario voted for us to spend money in that way,” he added. He suggested the PCs wait until the end of the next compliance period at the end of 2020, which would reduce the province’s financial exposure.

Cap and trade aims to lower greenhouse gas emissions by putting caps on the amount of pollution companies in certain industries can emit. Companies that don’t use their full allotment in a given period can sell them at auction, and ones that exceed the caps can buy them. The balance is determined at the end of four-year compliance periods.

Schreiner urged Ford to consider the Green Party’s revenue neutral carbon fee and dividend proposal, which would return funds collected from carbon emitters to Ontario households. He proposed this as a way to earnestly work across party lines in a way that’s consistent with both parties’ objectives around the economy and environment.

“This is a way for you to keep your campaign promises without sacrificing action on climate,” said Schreiner.

“I’m ready to find common ground with you to build this province up in a financially and environmentally sustainable way,” said Schreiner, reading from his letter.

“Climate change is the biggest threat facing humanity and there is an urgent call for us to act. Fortunately what is good for the environment is also good for the economy.”

Watching from the other side

Watching from the other side of the country with interest in a bit of partnering between parties hopefully.
Everything we've heard about Shreiner has been very positive.