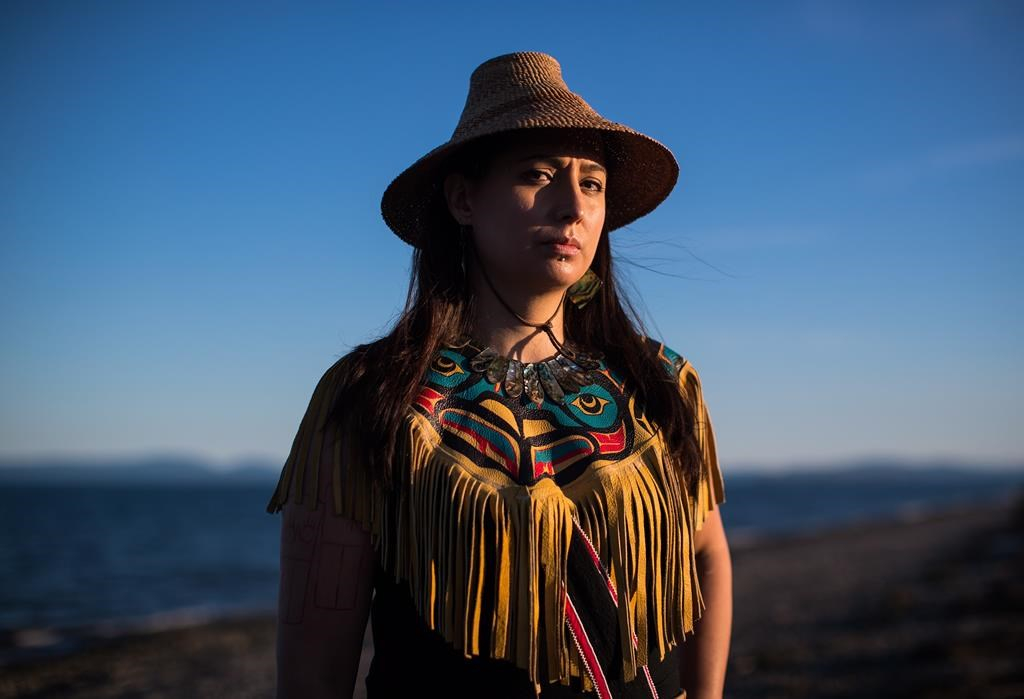 Mique'l Dangeli, of the Tsimshian First Nation, poses for a photograph in Tsawwassen, B.C., on Saturday June 23, 2018. File photo by The Canadian Press/Darryl Dyck
Previous story

A First Nations woman working to revive a threatened language in her traditional territory of northern British Columbia says she's being forced to leave the country on Canada Day.

Mique'l Dangeli belongs to the Tsimshian First Nation, whose territory straddles the border between Alaska and British Columbia. She says Canada won't recognize her right to live and work in B.C. because she was born on the American side on Annette Island Indian Reserve.

Her visa expires July 1, she said.

Dangeli gave up a tenure-track position with the University of Alaska Southeast to teach 65 students how to speak Sm'algyax in the community of Kitsumkalum, just outside of Terrace, because there are so few fluent speakers remaining.

She says she hasn't said goodbye to her students yet because it's too difficult.

"I've shed a lot of tears with my elders and family but I don't want to do that with my students. They're so young and their love for the language is my inspiration and solace. I wouldn't have the strength to fight this battle if I didn't see where the hope truly lies, which is within my students," she said.

After having two express entry applications for permanent residency fail, Dangeli has started a petition calling on the Canadian government to reciprocate the Jay Treaty, which was signed between the United States and Britain in 1794. As a result of the treaty, status Indians born in what became Canada, who also have 50 per cent blood quantum, can live and work in the U.S.

Canada does not recognize the agreement as binding because it never codified it.

"The colonial border between the U.S. and Canada dissects Indigenous territories in ways that sever the lifelines between First Nation families, communities, languages and ceremonies," Dangeli's petition says.

Dangeli says she considered applying for Indian status in Canada, but learned the two-year process hinged on the baptismal record of her great-great-great grandmother in Prince Rupert, B.C., in the 1860s.

"So if she decided not to convert to Christianity I would not be considered an Indian under the Indian Act. The whole process is about one colonial institution affirming the power of another. It has nothing to do with our inherent Indigenous rights that predate colonial law," Dangeli said.

The federal government has been working to resolve border issues for First Nations but has not reached a solution. In December 2016, it appointed Fred Caron to examine the issue as a special representative of the minister of Crown-Indigenous relations and northern affairs.

Caron met with representatives from more than 100 First Nations between January and August 2017, submitting a report to a committee of senior federal officials that is charged with developing a plan for addressing the border-crossing issues.

"Among the issues highlighted in Mr. Caron's report, and that are being examined by the committee of senior officials, are questions relating to the important cultural and family connections between First Nations in Canada and native American communities in the United States," Crown-Indigenous Relations and Northern Affairs Canada said in a statement.

The government will discuss next steps on the file with First Nations in the coming months, after the committee submits its recommendations, it said.

"The government is committed to working in partnership with First Nations to address their Canada-United States border crossing concerns," the department said.

Although the Jay Treaty is historic, Canadian institutions are increasingly choosing to honour it, said Mary Ellen Turpel-Lafond, a law professor with the Peter A. Allard School of Law at the University of British Columbia and inaugural director of the school's Indian Residential School History and Dialogue Centre.

She gave the example of Vancouver Island University, which offers domestic tuition for American Indigenous students who would fall under the treaty.

Border issues have most commonly arisen in Eastern Canada, she said, where communities like the Akwesasne First Nation cross three borders between Ontario, Quebec and New York.

Some are looking for solutions, like Mohawk leaders who called for a special identification card that would ease the border crossing, which hasn't been granted, she said.

"Indigneous people have been coming forward and saying let's work this out in a practical way," she said.

"It's a case where Canada is actually behind."

Toronto lawyer Sara Mainville says border issues have been common in Eastern Canada and some First Nations leaders have taken it upon themselves to set up meetings with customs and immigration officials so their community members don't run into any problems, since Canada isn't honouring the Jay Treaty.

In 2006, her own community of the Couchiching First Nation sanctioned the adoption of the husband of one of its members who was born on the American side of the Anishnaabe territory, because he needed medical care and Canada wouldn't recognize his rights to the territory.

Mainville pointed to Canada's commitment to the United Nations Declaration on the Rights of Indigenous Peoples as something that gives Dangeli's argument more weight, because it specifically says Indigenous Peoples divided by international borders have a right to maintain contact with their own members.

For Dangeli's part, she says she hopes her situation is resolved as soon as possible, especially given the critical state of the language.

"This is my heart and soul and the work is very much needed within our nation."

She lived in Canada her whole life. Then they told her she wasn't a citizen