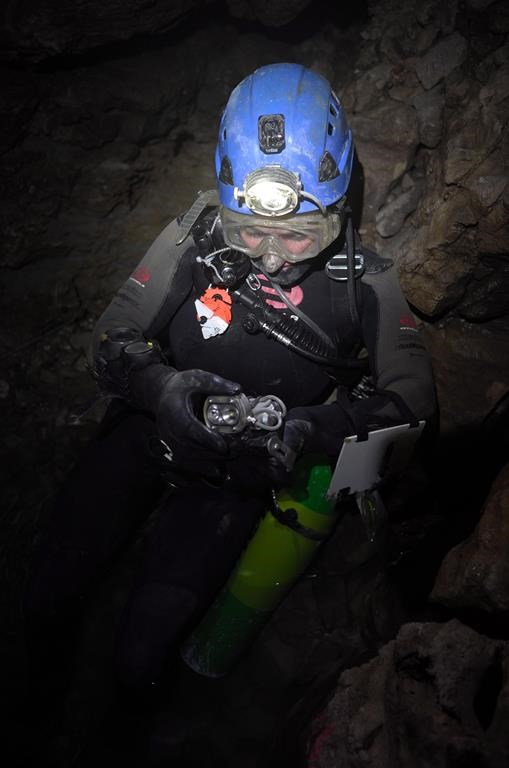 Kathleen Graham leads an expedition of Bisaro Anima, which she calls the deepest cave in Canada, near Fernie, B.C., in 2018. Handout photo by Jared Habiak
Previous story
Next story

An Alberta-based explorer who was trapped in a partly flooded cave for days says her heart goes out to the members of a boys' soccer team as they await rescue from an underground cavern in Thailand.

Kathleen Graham, president of the Alberta Speleological Society, said she remembers "pure relief" washing over her as she emerged from the darkness of Mexico's Sistema Huautla in April.

Unlike the group of a dozen boys and their soccer coach who went missing on June 23 when flooding trapped them in a cave in northern Thailand, Graham said her team had supplies on hand. It helped sustain them through the four days they were stranded after torrential rains blocked their exit route.

"We were planning to camp, so we had food, we had sleeping bags. These kids don't," she said in a phone interview from Calgary on Tuesday.

"Still, it really weighs on you, because you don't know. You're just waiting. You don't have any communication to the surface."

As her colleagues fretted over fears they would never again see the light of day, Graham said she focused her energies on survival.

She said she had to stave off panic to keep water levels steady in the one-inch pocket of air that allowed her and her team to swim out of the cave.

It was only then, she said, that the gravity of the situation hit her.

"You're trying to trick your own mind into being in a positive place," she said, "but then when you get to the other side, it's just pure relief."

She imagines that the boys, aged 11 to 16, and their coach have found some hope after being located by rescuers Monday. But even as the group of 13 receives medical attention and nourishment, she said, their path to safety remains uncertain.

Floodwaters as murky as "chocolate milk" and narrow passageways could make it difficult for the young men to dive out of the cave, said Graham.

But a Thai official said Tuesday that an underwater exit plan may be the only option if heavy rains forecast in the coming days worsen flooding in the mountain cave.

Christian Stenner of the Alberta/BC Cave Rescue Service said coaching the young men to swim out of the cave could prove to be risky under conditions that would challenge even an experienced diver.

Stenner said the perhaps safer option would be to wait for water levels to recede — but spending an extended period of time underground could take a psychological toll on the group.

"To be able to keep them occupied would be helpful, but that group has shown great resilience," he said Tuesday. "They seem to be in good spirits ... so hopefully they can sustain that for an even longer period if they have to."

Stenner said there have only been about five flooding-related cave incidents in Canada in the past 25 years, but Graham said she is keeping an eye on the rescue in Thailand for lessons that could be useful back home.

Before heading into a cave, she said, Canadians should ensure at least one member of their group is familiar with the underground layout. She also advised that explorers check weather forecasts ahead of venturing into one of the few caverns in the Rockies that are prone to flooding.