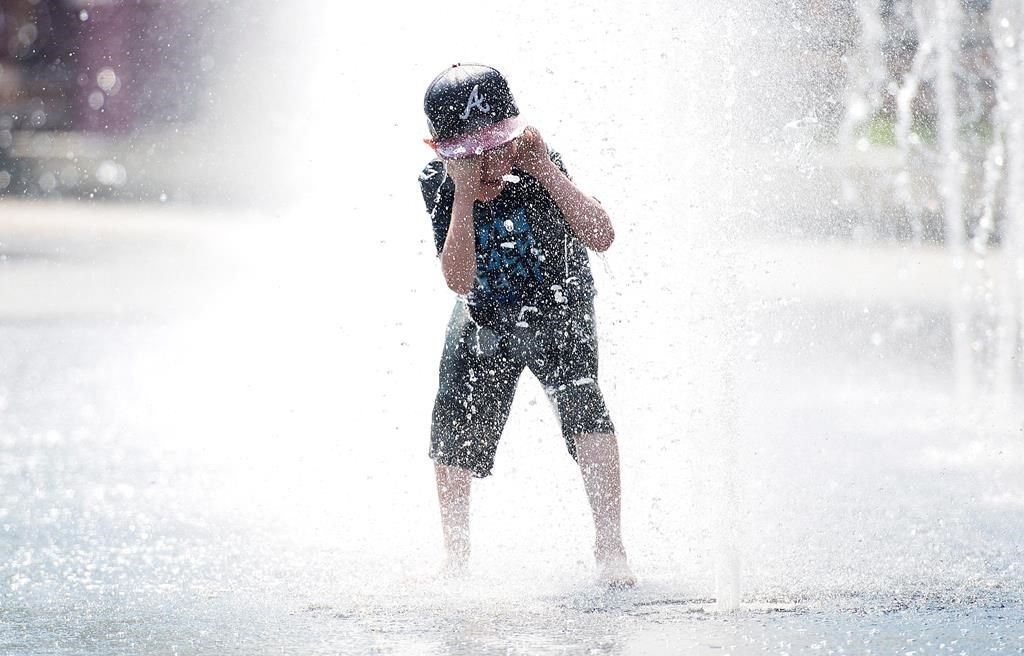 Seven-year-old Samuel Bedard from Quebec City runs through a water fountain as he beats the heat in Montreal, on Monday, July 2, 2018. Photo by The Canadian Press/Graham Hughes
Previous story
Next story

The scorching heat wave that set records in Ontario and Quebec over the Canada Day long weekend can't be directly attributed to climate change — but neither can the likelihood of a connection be ignored outright, says a University of Waterloo climate scientist.

Suggesting the two aren't linked would be akin to arguing that no particular home run can be attributed to steroids when a baseball player on a hitting streak is caught doping, said Blair Feltmate, who's also the head of the Waterloo-based Intact Centre on Climate Adaptation.

While a single isolated event might be normal, there's little doubt that the world and Canada are together seeing more extreme weather events — patterns that can be attributed to climate change, Feltmate said.

"All the predictions illustrate that going forward in Canada, things are going to be hotter, wetter and wilder," he said. "It's not any particular year that matters. What matters is the overall, the long-term trend."

Globally, the world's average annual temperature is one degree Celsius warmer than it was a century ago, says Feltmate.

"You have to remember that the difference between the temperature we have on the planet today versus an ice age is only five or six degrees Celsius, so being up one degree Celsius over a period of 100 years is a really big deal," said Feltmate.

The Paris climate change agreement Canada signed in 2015 with the rest of the world aims to keep global warming at 2 degrees C compared to pre-industrial levels. 1.5 C would be even better, scientists say. Canada's current plans to cut emissions are nowhere near sufficient; even if implemented — a prospect that's in serious doubt — the world will get 3 degrees C hotter than it used to be by the next century.

A 2017 study in the journal Nature Climate Change found that about one-third of the world's population already lives somewhere where the daily temperatures are considered lethal more than 20 days a year.

Even with drastic cuts to greenhouse gas emissions in the next 75 years, that number is still expected to grow to 50 per cent of the population — or 75 per cent, including parts of Ontario and Quebec, if nothing is done at all. With limited mitigation, parts of India, Africa and South America would hit lethal temperatures every day of the year.

Canadians need to brace themselves for an influx of eco-migrants over the next century, Feltmate warned — people who are fleeing their homelands because they are simply too hot.

Rolf Campbell, a weather historian behind the Twitter account "YOW Weather Records," says Ottawa hit its highest-ever humidex measurement on Sunday: 47.2 C. Temperatures in Ottawa have gone above 32 C for five days in a row, the longest heat wave since 2001. With the forecast set to hit 35 C on Wednesday, a six-day heat wave would be the longest since 1944.

The temperature on Canada Day was 10 C higher than average, leaving paramedics to treat more than 100 people at various Canada Day events. Some 18 people were taken to hospital with heat-related illnesses.