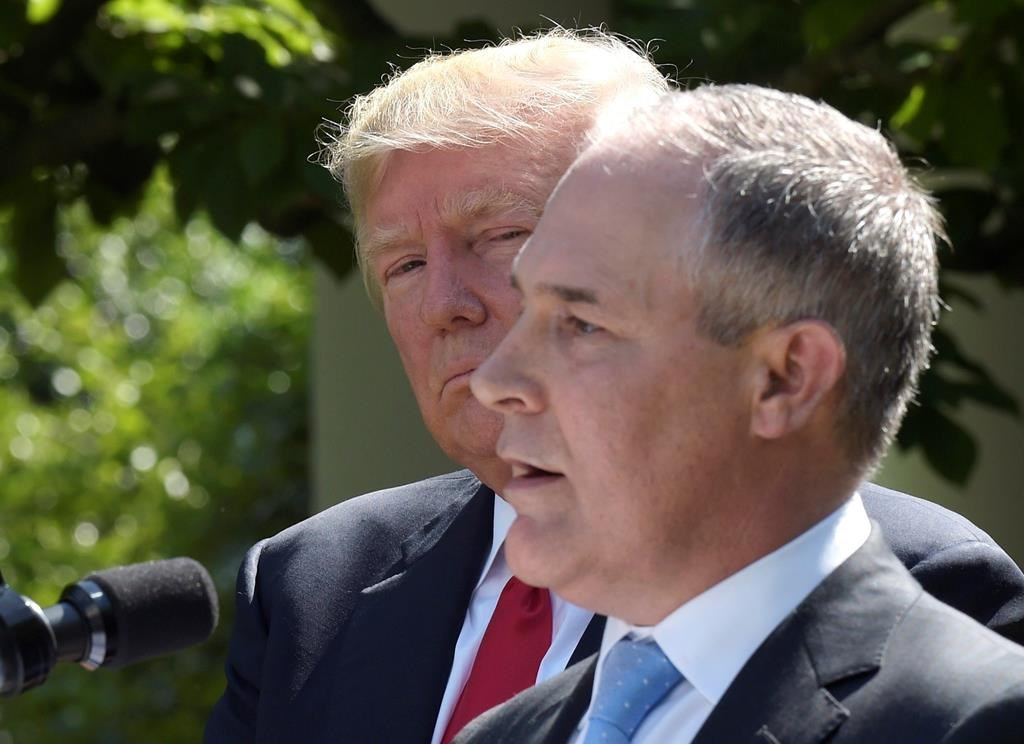 President Donald Trump listens as EPA Administrator Scott Pruitt speaks in the Rose Garden of the White House in Washington, on June 1, 2017. Pruitt resigned his post on July 5, 2018. File photo by The Associated Press
Previous story
Next story

Scott Pruitt is out as administrator of the Environmental Protection Agency.

EPA Deputy Administrator Andrew Wheeler, a coal lobbyist who was recently confirmed by the Senate, will succeed him as acting administrator. Wheeler is likely to continue down the path of rolling back the agency’s environmental regulatory work and changing the scope of its science; Republican Senator James Inhofe recently described the personnel change as a “good swap.”

Pruitt has been a lightning rod for controversy throughout his 17 months as EPA administrator, and for much of that time, he’s been a star in Trump’s cabinet by governing the EPA as a “practical implementation of the president’s wrecking-ball rhetoric.”

He lobbied the president to pull the US from the Paris climate agreement; began the process of unwindingdozens of Obama-era air, water, and climate regulations; undermined the role of science in agency rulemaking; rejected climate change science; backed off enforcement of polluters; and drove out hundreds of scientists and experts on staff, leaving the remaining employees demoralized. The furious pace of deregulation earned Pruitt accolades from President Trump and industries, especially fossil fuel, agriculture, and automotive, grateful for weaker oversight and less stringent standards.

Throughout it all, the former Oklahoma attorney general acted as if he were free to operate outside the normal rules governing public servants. A number of his high-level staffers have resigned from the EPA in recent weeks, many of them aides he brought with him from Oklahoma. Meanwhile, Pruitt consistently sought to pivot blame for his troubles to career staffers and the media.

He’s facing more than a dozen federal inquiries into his conduct, and the EPA’s Inspector General is looking at his travel, expenses, housing arrangements in Washington, DC, expansive security staffing, and unauthorized approvals for staff raises, among other matters. The questions don’t end with his departure—audits normally continue even after an employee resigns, and several House Democrats have already pressed for a criminal probe from the Department of Justice.

The individual items in Pruitt’s lengthy list of dozens of controversies are all consistent with the theme of using his public office for personal gain. He’s used his EPA staff to attempt to secure employment for his wife Marlyn Pruitt, trying to get her a franchise with the evangelical-friendly Chick-fil-A before she landed a contract with Judicial Crisis Network, which sends millions to conservative groups and advocates for conservative justices. He sent his aides and security detail on missions to find him lotion from the Ritz Carlton and a used Trump hotel mattress. He’s wanted to spend lavishly on his office furniture, a bulletproof sports vehicle, a charter plane membership, and other perks, while the EPA relocated, demoted, or forced out at least five staffers who resisted his requests.

One of those whistleblowers—Kevin Chmielewski, a senior EPA official who served as Pruitt’s deputy chief of staff until he was put on unpaid administrative leave—recently revealed to members of Congress even more ways Pruitt wanted to use taxpayer funds for first-class travel, swanky hotels, and racking up frequent flier points.

The Atlantic discovered he had approved raises for two of his staffers, using a clean water law as a way to circumvent the White House, and then he denied knowledge of this arrangement on Fox News. Several outlets, including ABC News also uncovered that he had rented a condo from an energy lobbyist, and only sporadically paid below-market prices in an unusual arrangement.

Meanwhile, internal emails obtained from the EPA show how his political staff have seized more control over FOIA requests, cutting Pruitt off from the public and press. The emails also reveal the extent of his strategy of justifying his excessive expenses because of a so-called need for greater personal security.

"We’ve reached the point where there’s not much civility in the marketplace," Pruitt explained to the New Hampshire Union Leader, "and it’s created, you know, it’s created some issues and the (security) detail, the level of protection is determined by the level of threat."

Pruitt’s defense against the scandals was just as spare on the details. He liked to say, “with great change…comes great opposition.”

While defending the Trump administration’s proposals for deep cuts to the EPA budget and celebrating shrinking the agency to Reagan-era staffing levels, Pruitt sought to expand the size and scope of his office. He spent $43,000 to build a secure phone booth in his office; approved a $120,000 media contract with a GOP firm to track and shape press coverage (canceled after Mother Jones exposed it); and has been flanked by an unusually large, 24-7 security detail that drew resources away from the agency’s environmental enforcement office. And these are just a few of the more recent controversies that marked Pruitt’s tenure.

That’s not even the full list. Nor do the ethics scandals begin to touch on the environmental controversies that have defined his tenure and will have inflicted permanent damage to the agency he was appointed to lead: How the industries the EPA’s meant to regulate have dominated rulemaking, how hundreds of staff experts and scientists have been driven out, and environmental enforcement dropped precipitously.

Nonetheless, until almost to the very end, Pruitt sustained plenty of allies on the right who waged a campaign to save his job: In April, for instance, the climate-denier, Koch-brother funded think tank Heartland Institute, American Legislative Exchange Council, and the fossil fuel group American Energy Alliance sent a letter urging Trump to stand by his EPA administrator.

Trump was openly reluctant about cutting Pruitt loose, defending him in a tweet in April: “While Security spending was somewhat more than his predecessor, Scott Pruitt has received death threats because of his bold actions at EPA.”

Besides what Trump sees as Pruitt’s effectiveness at crippling the EPA, the two also reportedly bonded over a shared sense of “mutual persecution” that the media is out to get them.

Then Pruitt lost several key friends: Longtime political ally Inhofe told Fox News host Laura Ingraham on her radio show, “All these things that are coming out are really not good things. I’ve kind of taken the position that if that doesn’t stop, I’m going to be forced to be in a position where I’m going to say, ‘Well, Scott, you’re not doing your job.’ And hopefully that will change.”

The EPA is not typically the most glamorous job in a presidential cabinet, nor is it normally a platform for a future political career, but Pruitt always had higher office in mind.

“I don’t think EPA is his ultimate destination,” University of Tulsa law and environmental professor Gary Allison said, echoing a similar refrain from Oklahomans who expected him to be eyeing 83-year-old Oklahoma Sen. James Inhofe’s seat, who is up for reelection in 2020. His longtime pastor, Nick Garland of the First Baptist Church Broken Arrow, told me about how at each step of his career, Pruitt came to him and said “Pray for me. I’ve got something I feel like I’m supposed to run for.”

Pruitt’s elevation to the EPA, whether it was God’s plan or not, exposed him to national scrutiny of behavior that was first hinted at during his time as Oklahoma’s attorney general.

But Pruitt’s exit will test another theory: that he could seek to rehabilitate his political future, because he’ll always have some job security with fossil fuel interests.

“I think he’s made the bet that the fossil fuel industry will take care of him one way or another,” Democratic Sen. Sheldon Whitehouse, a member of the committee that oversees the EPA, predicted last winter. “They reward obedience, and nobody has been more obedient than Scott Pruitt.”

By Carl Meyer | News, Energy, Politics | June 14th 2018
Reports from the Race to a Safer World

Garbage out, garbage in :-(

Garbage out, garbage in :-(

"Trump was openly reluctant about cutting Pruitt loose, defending him in a tweet in April: “While Security spending was somewhat more than his predecessor, Scott Pruitt has received death threats because of his bold actions at EPA.”"

The actions of men like Pruitt, in fact, represent a death threat to the majority of species, including our own. Better Pruitt under threat than the rest of us, though his claims of his own risk were likely enormously exaggerated, given those he has been attacking are hindered by a decency and intellect which he himself lacks.

The Republican party has been revealed clearly as the party of pollution, corruption, and blasphemy. Citing prayer and God's support, while working to attack and imperil the Creation they claim God made, is clearly taking God's name in vain. No just or wise being could possibly support rank dishonesty and corrupt self-interest, if one believed in such a force or entity. Republicans are rotting and putrid at their core.