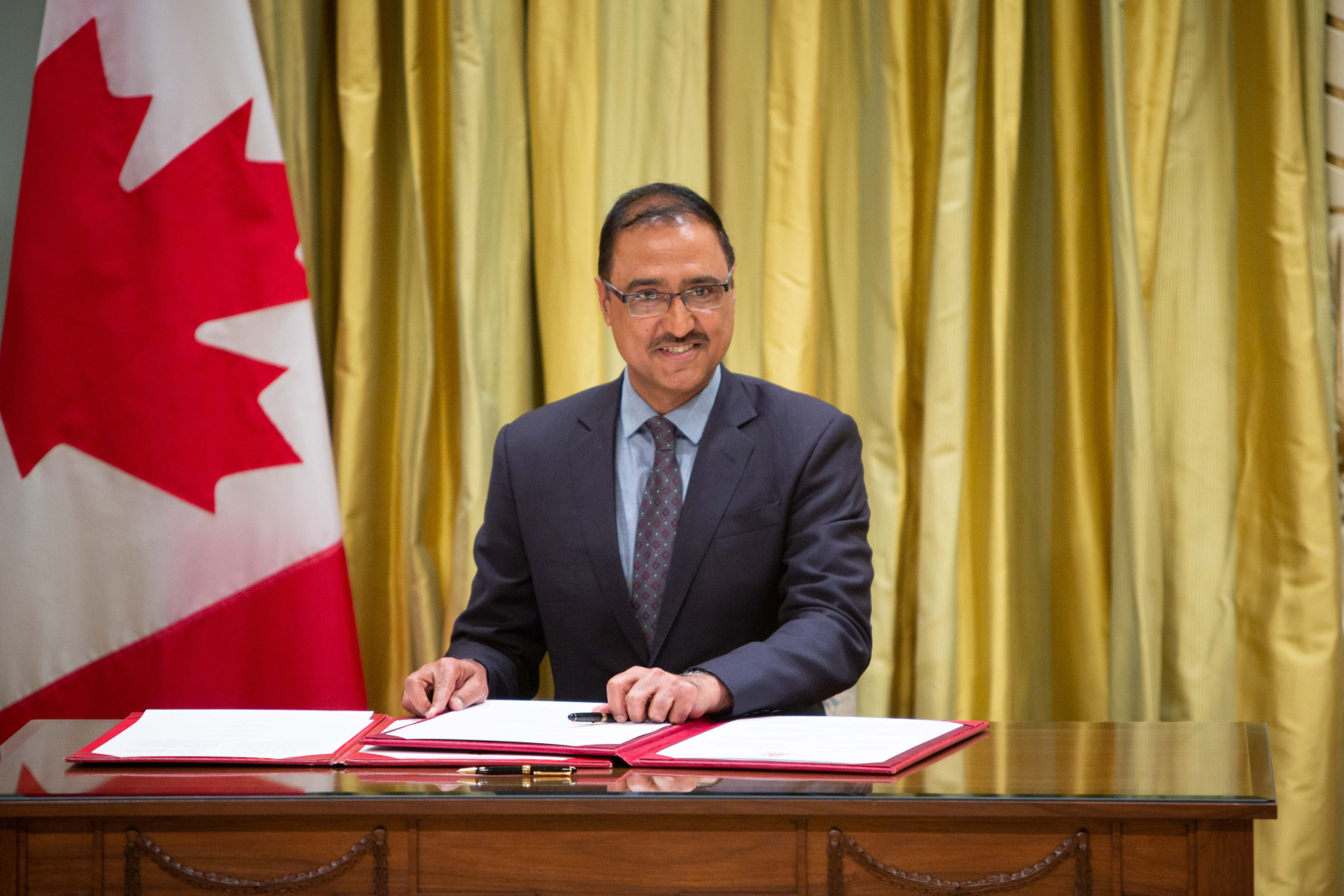 The Trudeau government’s new point man on pipelines, energy policy and natural resources says he sees renewable power as part of a “mixture of options” that includes the Trans Mountain oil pipeline.

Amarjeet Sohi, one of three Liberal MPs hailing from Alberta, was appointed natural resources minister by Prime Minister Justin Trudeau on Wednesday. He replaces Jim Carr, who was shifted to the international trade file.

Sohi, the MP for Edmonton—Mill Woods, has been outspoken in defending the government's energy policy and in criticizing Alberta opposition United Conservative Party leader Jason Kenney over energy and climate policy.

“Our government has been focused on growing the economy and creating jobs for the middle class, at the same time taking action on the environment,” Sohi told reporters after the cabinet shuffle at Rideau Hall, the governor general's residence in Ottawa.

“Natural resources, including renewable resources, are an integral part of our efforts to build a stronger middle class, and we see a mixture of options as we move forward.”

Get your facts right Mr. Kenney. Ontario is getting $11.8B under the same program BC got $4.3B. #Cdnpoli #yeg #ableg https://t.co/z5JbkrLAzw

Sohi, who was previously managing the government’s rollout of billions of dollars’ worth of infrastructure projects like public transit and green buildings, takes on a politically charged file in natural resources, in the run-up to the 2019 federal election, particularly the Trans Mountain pipeline and tanker expansion project.

Trudeau's office said Wednesday in a press release that it expected Sohi to oversee "important pipeline projects, including the completion of the Trans Mountain Expansion Project."

Wilkinson, who was parliamentary secretary to Catherine McKenna, the minister of environment and climate change, replaces Dominic LeBlanc, who was moved to intergovernmental affairs.

Funding and expanding Canadian renewable energy has also been a major focus of the government's efforts.

In Sohi's home province of Alberta, the provincial government secured the lowest renewable electricity pricing in Canada, bringing in roughly $1 billion of private-sector investment and adding around 600 megawatts of wind power to the grid.

Renewable energy may also take on a stronger role for Sohi after the election of Ontario Premier Doug Ford, who has been shutting down Ontario renewable projects. Ottawa said it would review nearly $420 million in transfer payments meant for projects that reduce pollution.

Ford has also yanked the province's carbon pollution pricing system, meaning billions of dollars of revenue is being pulled out of green projects like energy retrofits. Trudeau's government plans to implement a federal carbon price on provinces that don't have their own systems by 2019.

The federal government has taken heat from several groups over its decision this summer to purchase Trans Mountain with $4.5 billion of public money.

Environmental groups, many First Nations on the pipeline’s direct path and the provincial NDP government of B.C. all oppose the project, saying it will contribute to climate change and expansion of the fossil fuel industry while increasing risk of an oil spill on the west coast.

Meanwhile, federal and provincial opposition Conservatives say the Trudeau government never should have directly bought into the energy business.

The government maintains the project is in the national interest, because they say it will create thousands of good-paying jobs, and contribute to economic prosperity by helping get a better international price for Canadian resources.

“We need to make sure that we're building this pipeline to get our resources to international, non-US markets,” said Sohi.

“The $15 billion that we lose every year because we get a discount our oil, we need to change that," he said, referring to the gap in price between the benchmark for North America and Alberta's oil.

Wilkinson: 'We have a plan' on killer whales

The unpopularity of the Trans Mountain pipeline in British Columbia, where the provincial government has fought Ottawa and the Alberta NDP for months, puts a spotlight on the 17 Liberal seats in B.C.

One of those seats is held by Wilkinson, who takes over the oceans file at time when a growing concern about the Trans Mountain pipeline is the survival of endangered southern resident killer whales.

A joint agreement between the government and the National Energy Board last fall showed both believed the operation of marine vessels related to the Trans Mountain project — likely oil tankers filling up or departing from the terminal near Burnaby, B.C. — “is likely to result in significant adverse effects” on the whales.

They “face an imminent threat to survival and recovery which requires immediate attention,” the government has said.

Speaking to reporters after the cabinet shuffle, Wilkinson acknowledged that the southern resident killer whale is an “important file that we have been working on actively for two or three years now."

“The issues that affect killer whales relate to noise pollution from ships, they relate to availability of prey — which is primarily Chinook salmon — and they relate to contaminants in the water,” he said.

Wilkinson, in his old job, was on hand in Vancouver on June 22 to outline the government’s Whales Initiative, which draws on that funding to improve the availability of prey, limit fishing of Chinook salmon, and boosting scientific research and monitoring.

“We’ve got a plan that we announced, including $167 million to address those issues,” he said at Rideau Hall, referring to the Whales Initiative.

“We have a plan. We are working with stakeholders. I believe we will be able to put the killer whales onto a better track and to work towards recovery of the species.”

Sohi: "'We need to make sure

Sohi: "'We need to make sure that we're building this pipeline to get our resources to international, non-US market.'
"'The $15 billion that we lose every year because we get a discount our oil, we need to change that,' he said, referring to the gap in price between the benchmark for North America and Alberta's oil."

The discount on AB heavy sour crude is mostly due to low quality and distance. Shipping dilbit overseas doesn't improve those parameters.
Would The National Observer please ask the Hon. Minister for evidence that overseas markets exist for AB oil? So far we don't have a scrap of evidence. Just spin, spin, spin.

Very good points Geoffrey, could you please post (url) some of the main sources you used? I would find that very useful for my own reading. Thank you

“Our government has been

“Our government has been focused on growing the economy and creating jobs for the middle class, at the same time taking action on the environment,” Sohi...

Good luck Mr. Sohi with this lemon pipeline/tanker export plan created your boss. No doubt Mr. Carr is happy to be relieved of this headache export plan !

See https://www.bloomberg.com/news/articles/2018-07-18/amid-trump-trade-war-...
We’re reminded in the Bloomberg story “… that very few of the 300,000 barrels of oil ….are making their way to Asia…...“The highest prices for heavy oil are in the U.S. Gulf, and that’s because that’s where the greatest amount of heavy-oil refinery capacity is.”
Recall when campaigning Donald Trump said TransCanada Corp.(KXL) should give the U.S. a “big, big chunk of the profits…!!! What’s the new TMX owner (Canadian taxpayer) to do when the, now President, recalls this ‘bright idea’ …and who’s likely to purchase TMX with that potential threat lingering ??
Of course our PM need just call the President and ask him to ‘withdraw that suggestion’,
...OR ‘hope and pray’ that he forgets !!??
Carl Shalansky, P. Eng. (Retired)
Blog: https://redfern3359.wordpress.com/
(604) 986-4657

We have a plan, just leave it

I see no mention of the

I see no mention of the removal of fish farms from the ocean and much further inland. As we all know that is a huge problem for our salmon and consequently to our whales. It has also become a problem that affects our human population as well. Mr. Wilkinson must be aware of that.
The pipeline will not generate thousands of jobs and there are few if any countries who want to buy dilbit @inflated prices.