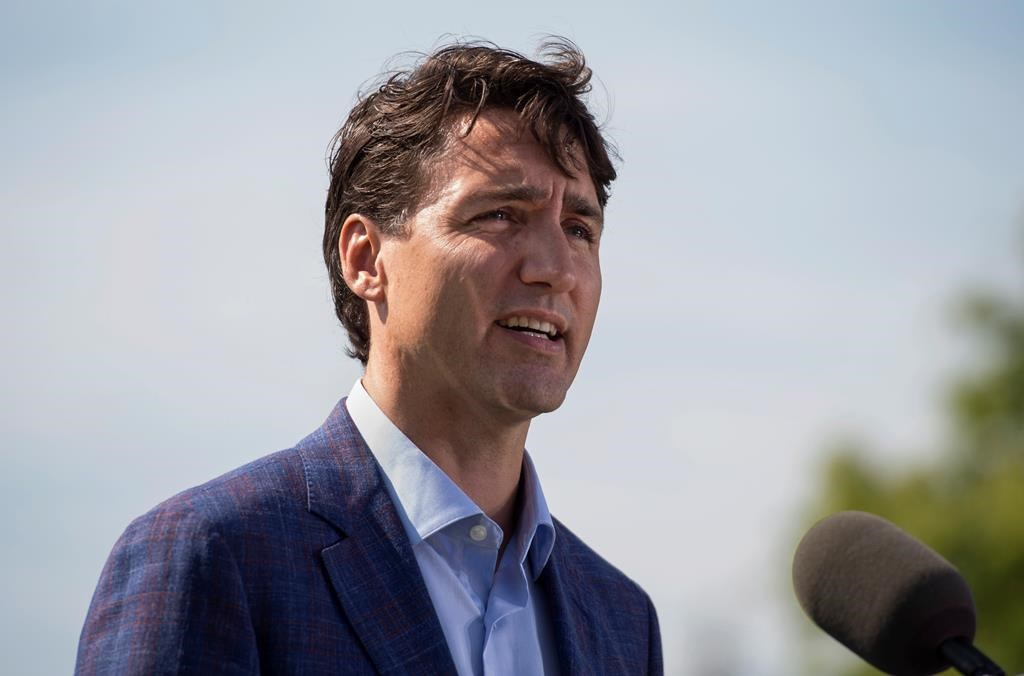 Prime Minister Justin Trudeau makes an announcement of $90 million to improve the Trans-Canada Highway in northeastern Nova Scotia during a press conference in Sutherlands River, N.S. on Tuesday, July 17, 2018. Photo by The Canadian Press/Darren Calabrese
Previous story
Next story

Prime Minister Justin Trudeau levelled fresh condemnation at Vladimir Putin on Tuesday, but refused to weigh in on the Russian president's meeting with Donald Trump — underscoring what experts say is the difficult tightrope act that the U.S. president is forcing Canada to walk on the world stage.

The tough words for Putin came during a news conference in Nova Scotia, where the prime minister was announcing new money for highway safety even as officials in Washington, Ottawa and other many capitals were still grappling with the previous day's Trump-Putin summit in Finland.

"Canada has been unequivocal in our condemnation of Vladimir Putin and Russia," Trudeau said in response to a reporter's question before listing a host of Russian actions under Putin's watch that Canada has opposed.

Those include Russia's annexation of Crimea, its support for rebel forces in eastern Ukraine and Bashar al-Assad's government in Syria, as well as its alleged use of chemical weapons in Britain, which Moscow has denied.

Yet Trudeau noticeably avoided any mention of Trump, who offered warm words for the Russian president during the summit in Helsinki while appearing to blame his own country for poor relations with Moscow and accept Putin's denials of having interfered in the 2016 U.S. presidential election.

The latter comment contrasted sharply with the assessment of various U.S. intelligence agencies about what happened in the election that saw Trump become president, and sparked an uproar in the U.S. as officials and pundits blasted Trump for siding with Putin over American authorities.

Asked specifically about Trump's comments during Monday's joint news conference with Putin, Trudeau replied: "We condemn Russia and the way that Russia engages in international affairs."

On Tuesday, Trump appeared to walk back some of his comments in Finland, saying that he had full faith in the U.S. intelligence community shortly after tweeting that while he had a good meeting last week with NATO leaders, "I had an even better meeting with Vladimir Putin of Russia."

Still, Canadian officials were hard at work trying to get a better sense of what was said during the two-hour, closed-door meeting between Putin and Trump — and what ramifications, if any, the discussion would have for Canada.

The potential implications are many, including in Latvia and Ukraine where Canada has troops, and in terms of further election interference, says Fen Hampson, director of the global security and politics program at the Centre for International Governance Innovation in Waterloo, Ont.

"What we're all worried about coming out of this summit is that Putin is going to feel emboldened," Hampson said. "The worry is that an emboldened Russia will do things that will increase the risk and security uncertainty."

Even without a firm handle on what passed between Putin and Trump, experts say the meeting again saw the U.S. president throw long-standing norms, conventions and principles out the window — many of which have formed the basis of Canada's approach to the world.

Some such as former Canadian ambassador Ferry de Kerckhove would like to see Trudeau work with allies to take a more assertive stand with Trump when it comes to defending shared values, which he argued is easier now than ever with North American free trade talks having stalled.

Yet the prime minister's refusal to comment on the Trump-Putin meeting, despite Canada's strong views on Russia, highlights the difficulty he continues to face when it comes to the U.S. president, says University of Ottawa professor Roland Paris, who served as Trudeau's first foreign-policy adviser.

"Canada is in a particularly exposed position compared to other western allies because of our trade dependence on the United States," Paris said.

"The prime minister has to walk a fine line between standing up for Canadian principles and interests and managing a relationship with a mercurial president."