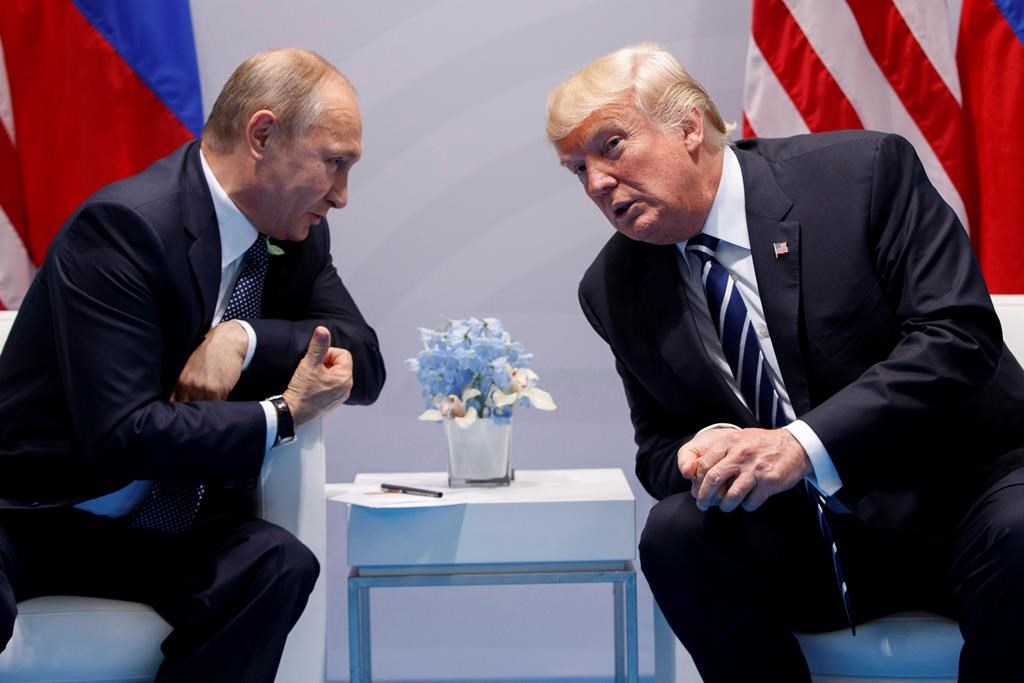 U.S. President Donald Trump and Russian President Vladimir Putin hold a face-to-face meeting on the sidelines of the G20 summit in Hamburg, Germany in 2017. File photo by The Associated Press
Previous story
Next story

U.S. President Donald Trump, who has been playing the bull in Prime Minister Justin Trudeau's G7 china shop, announced Friday morning that he felt Russia should attend the club of leading industrialized nations four years after it was kicked out over its seizure of Crimea.

The move is sure to add fuel to the fire that has been raging inside the camps of several other G7 leaders, who are furious at the American president for abandoning the Iran nuclear deal, backing out of the Paris climate accord and applying tariffs on steel and aluminum against them on national security grounds.

It comes after a tumultuous two days in which Trump and French President Emmanuel Macron fired angry tweets at each other, following Macron's meeting with Trudeau in Ottawa, where the two leaders vowed to stand up to Trump on trade.

“I have been Russia’s worst nightmare...but with that being said, Russia should be in this meeting,” Trump said Friday at the White House, according to press reports. “It may not be politically correct, but we have a world to run...they should let Russia back in.”

The U.S. president will leave Trudeau's summit early, missing a key meeting on climate change and clean energy, officials confirmed late Thursday. It's looking increasingly unlikely that he will be around to release a final joint statement by leaders on Saturday.

In early 2014, Russia executed what the BBC has called "the smoothest invasion of modern times" when pro-Russian gunmen attacked a Ukrainian army base, then flooded Russian military bases with troops, eventually sealing off the Black Sea peninsula from the rest of Ukraine. By March that year, Crimea's Parliament voted to break away from the country and join Russia.

It was Trudeau's predecessor, former prime minister Stephen Harper, who reportedly spearheaded the move to kick Russia out of what was then the G8 and sanction Moscow over its efforts. The group said the Crimea annexation violated the United Nations Charter and numerous other international agreements. The country was suspended and the G8 became what it is today, the G7.

Last year, Russia said it will permanently leave the group, and had no intention of re-joining. At that point, Trump had been elected president and the U.S. intelligence community had concluded that Russian President Vladimir Putin personally ordered an "influence campaign" aimed at putting Trump in power.

Throughout his term in office, Trump has repeatedly denigrated his own country's intelligence on that effort, and sided with Putin instead, even while U.S. Special Counsel Robert Mueller has led a law enforcement investigation into any ties or co-ordination between Trump's presidential campaign and the Russian government.

That investigation has resulted so far in over 100 criminal counts against 19 people and three companies, including five guilty pleas. Trump has responded by repeatedly calling the investigation a "witch hunt" or a "hoax."

On Friday, Trump decided to ignore that whole history. Minutes before he prepared to fly to Canada to attend Trudeau's G7 summit, he said Russia should be attending.