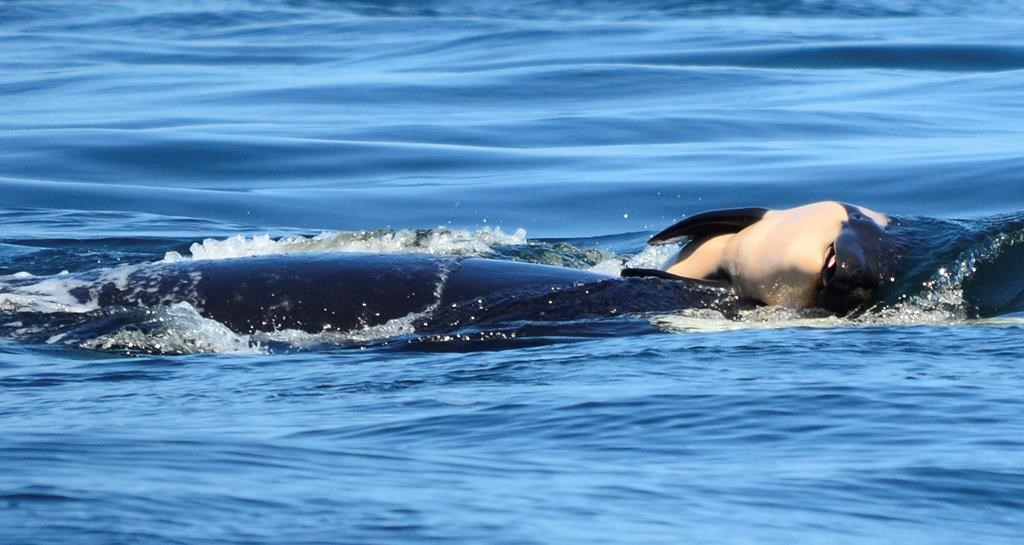 In this file photo taken on July 24, 2018, provided by the Center for Whale Research, a baby orca whale is being pushed by her mother after being born off the Canada coast near Victoria, British Columbia. File photo by Michael Weiss
Previous story

A female killer whale that was seen pushing the body of its newborn calf after it died last week appears in good health and is getting help from members of her pod, says a whale scientist.

Ken Balcomb, the senior whale scientist at Center For Whale Research in Washington state, said despite concerns the mother's state of grief could be affecting its health, the animal appears in good condition.

Researchers and whale watchers have spotted the orca, known as J35, holding the calf above the water since July 24 as other members of the southern resident pod hover nearby.

"She's doing fine," Balcomb said Wednesday. "She's looking good. It will take almost a month before you see signs of emaciation in the mother. At present there's no indication she's got a problem. She does have a son that is helping feed her, I think."

He said it's unclear if the whale is still pushing her calf because the pod hasn't been seen since Monday night. Windy conditions prevented researchers including the Department of Fisheries and Oceans from getting out Wednesday to observe the female killer whale and its pod, said Balcomb.

The southern resident orcas that frequent West Coast waters don't normally stay in one place for too long and the mother's behaviour since the calf's death last month is not usual, he said.

"Usually we just see them briefly and then they are gone," said Balcomb. "It's pretty unusual she's in the area for a week and pushing the baby the entire time. Yes, that's unusual."

The calf's death is another sad chapter in the ongoing struggle for survival facing the remaining 75 endangered southern resident whales, Balcomb said.

The federal government limited the chinook salmon fishery recently in an effort to help the recovery of the southern residents. It also imposed a minimum distance of 200 metres for vessels to stay away from killer whales in Canadian waters and is conducting research on the impact of pollution.

Balcomb, who has been studying the southern residents since 1976, said their recovery depends greatly on healthy runs of chinook salmon.

"We know we are having very high mortality in the babies that are born," he said. "We haven't had any babies for three years that have survived. And we've got another one born four years ago that's on its way out."

Balcomb said he's hoping for a large run of chinook this summer to feed the orca pod, but the future of the young female still appears grim.

"It's looking pretty skinny. We could be covering another story within a few weeks," he said.

Fisheries and Oceans said it continues to monitor the movements of a large healthy male orca that arrived last week in the harbour at Comox on the east side of Vancouver Island.

The transient killer whale hunts seals and has been observed swimming and leaping in the harbour, which is used by commercial fishing and recreational vessels. A Canadian Coast guard patrol boat was sent to the Comox area to monitor the killer whale and vessels in the harbour.

"Watching whales and other marine mammals in their natural surroundings gives Canadians an opportunity to better appreciate these beautiful animals, but when humans get too close to wildlife in their habitat, we risk disturbing and even harming marine wildlife," the department said in a statement.

By The Canadian Press in News, Politics | July 20th 2018
State Of The Animal