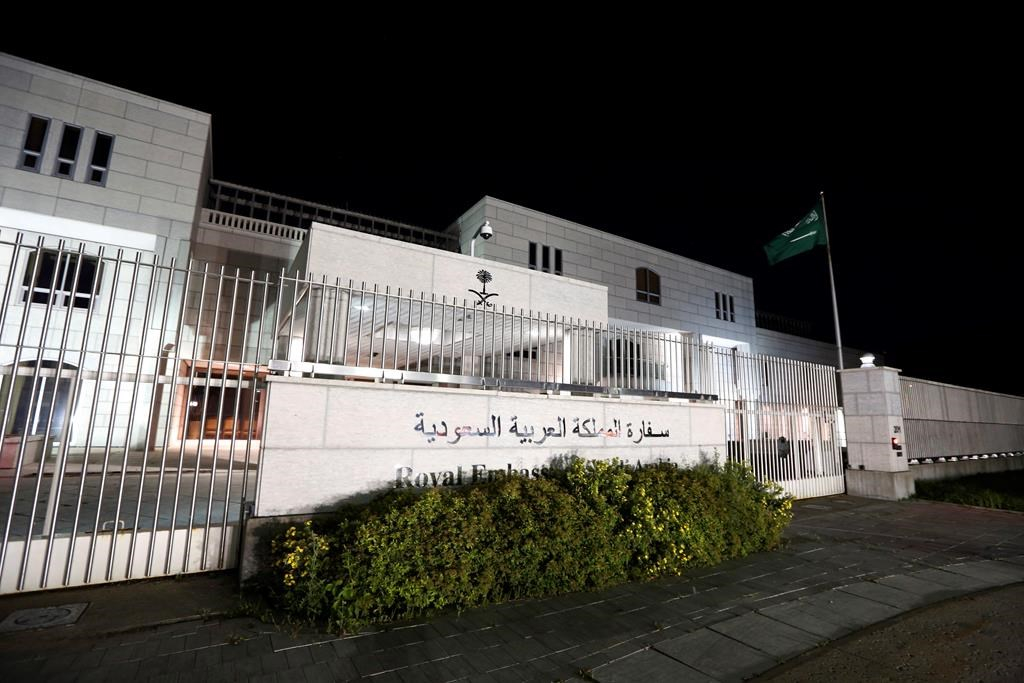 The Embassy of the Kingdom of Saudi Arabia is shown in Ottawa on Sunday, Aug. 5, 2018. File photo by The Canadian Press/David Kawai
Previous story

Saudi Arabia said Sunday it is ordering Canada's ambassador to leave the country and freezing all new trade and investment transactions with Canada in a spat over human rights.

"We consider the Canadian ambassador to the Kingdom of Saudi Arabia persona non grata and order him to leave within the next 24 hours," Saudi Arabia's foreign ministry said on Twitter.

And the ministry said Saudi Arabia is recalling its ambassador to Canada in a dispute that appears to be over a tweet on Friday from Global Affairs Canada.

"Canada is gravely concerned about additional arrests of civil society and women's rights activists in Saudi Arabia, including Samar Badawi. We urge the Saudi authorities to immediately release them and all other peaceful human rights activists," the Canadian tweet said.

The Saudi foreign ministry called the use of "immediately release" in Canada's tweet "unfortunate, reprehensible, and unacceptable in relations between states."

Global Affairs Canada told The Canadian Press on Sunday night it was aware of the issue but offered no immediate comment.

Saudi Arabia said it was also freezing all new trade and investment transactions with Canada and "reserves its right to take further action."

It said it will not accept any form of interference in its internal affairs and considers the Canadian position "an attack" requiring a firm stance to deter who "attempts to undermine the sovereignty" of Saudi Arabia.

Amnesty International has said Badawi, the sister of jailed blogger Raif Badawi, was recently detained along with Nassima al-Sada, another prominent female activist.

The human rights group's Middle East research director described the arrests as part of a larger crackdown on human rights in Saudi Arabia.

Jackie Hansen, a gender rights campaigner for Amnesty International Canada, said last Thursday that the circumstances of the arrests were still unclear and there's no news of any charges.

Badawi's brother was arrested in Saudi Arabia in 2012 and later sentenced to 1,000 lashes and 10 years in jail for criticizing clerics.

He received 50 lashes in January 2015 during a public flogging but is not believed to have received any further corporal punishment since then.

"Canada stands together with the Badawi family in this difficult time, and we continue to strongly call for the release of both Raif and Samar Badawi," she wrote on Twitter.

Does Al Jazeera have fake news?