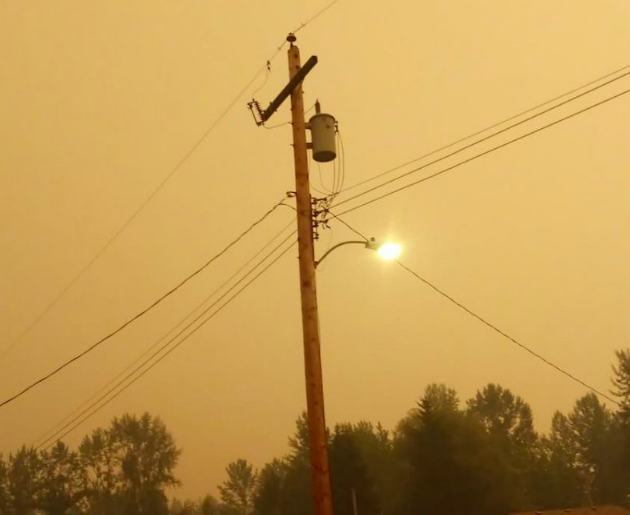 The street lights in Quesnel, B.C. turned on as early as 1:30 p.m. earlier in August 2018 as smoke from nearby fires blocked out the sun. Photo by Sheri Walsh
Previous story
Next story

Sheri Walsh describes the smokey view outside her home as ominous.

“Here we go, it’s the end of the world," said the resident of Quesnel, B.C., a small city in the interior of the western Canadian province. "A little bit of an apocalypse happening.”

Speaking to National Observer by phone on Wednesday, Walsh explained what happened when she got the order to evacuate.

“You could actually see the smoke rising. It was something out of Stephen King’s The Mist,” she said. “You go out for 10 minutes and your chest is tight, you’re coughing and wheezing. At some point you even get sick to your stomach.

“I got the evac order and I broke down for about 15 minutes. I had to cry, I had to shake. I’m a single mom with a 10-year-old autistic son. We’re on disability. We don’t have money.”

On Wednesday, while in Nanaimo, B.C. for a summer cabinet retreat, Prime Minister Justin Trudeau announced new support measures for B.C. residents impacted by the fires. He said his government would create an ad-hoc cabinet committee to co-ordinate federal support for affected communities, as military response continues on the ground.

"Our thoughts are with everyone affected by the wildfires in British Columbia, and our government is determined to support British Columbians in the wake of this devastation," he said in a press statement.

"With this new committee, we will work to address the urgent and long-term impacts of the wildfires, and will collaborate closely with Premier Horgan and local authorities to support recovery and rebuilding efforts. I would especially like to thank first responders and all of those who are working hard and putting their lives at risk to help people affected by the wildfires."

It's not clear to residents like Walsh however, whether such measures will be enough to address the chaos unfolding throughout the province. She manages an apartment in Quesnel, and said none of the tenants have insurance.

“If the fires come through, we lose everything and it doesn’t come back.”

Blotting out the sun

Quesnel was one of dozens of communities in interior B.C. inundated by smoke this past week. Walsh told National Observer that sunlight was barely able to penetrate the thick smoke. The day the evacuation order was lifted was the day that Quesnel had its darkest skies. The street lights turned on as early as 1:30 p.m.

The smoke, she said, prevented her and her child from going outside. “We’ve pretty much been stuck in the house. Thank goodness for Xbox.”

Whenever her son leaves the house, she added, he has to wear a face mask. But he understands — she said he loves to play video games that have a post-apocalyptic setting.

“He plays Fallout so he kinda gets it. I tell him, ‘Kaiden this is fallout time!’”

A province on fire

This places the B.C. wildfire season of 2018 as the third-worst season ever, after 1958 and 2017, the latter being the worst wildfire season the province has ever faced.

On Wednesday, Trudeau told reporters and stakeholders in Nanaimo that the federal government would contribute to the recovery and rebuilding of areas lost to wildfire damage, while the Canadian Armed Forces continues to support firefighting and evacuation on the ground, in co-ordination with the Government Operations Centre.

National Observer reached out to the B.C. government for comment, but no response was given in time for publication.

A second state of emergency

The federal announcement comes one day after B.C. Premier John Horgan declared a second state of emergency for the province due to the intensity and spread of the wildfires. During a visit to Prince George on Tuesday, he said the sky in the northern city turned jet black one morning last week from fires burning in nearby communities.

"We have serious challenges for public health and we need to adapt our policy making, working with all levels of government to make sure that as we go forward we're better prepared," Horgan said during a press conference on Tuesday.

The B.C. government budgeted $63 million for wildfire suppression for the 2018 to 2019 season, but has already spent $274 million, according to figures from Ministry of Forests, Lands, Natural Resource Operations and Rural Development. It said last year's budget allocated the same amount of money, but the firefighting efforts ended up costing $649 million.

More than 2,000 evacuees made their way to Prince George in mid-August after being ordered out because of an 850-square-kilometre blaze threatening an area from Fraser Lake to Fort St. James.

In Quesnel, Walsh first learned of Trudeau's promises while being interviewed for this story. Although thankful, she was frustrated that preventative measures were not put in place, or that the health effects of long-term smoke inhalation were not communicated to the public.

"I wish that there would have been proactive measures, not active measures. It’s great, thank you prime minister, but at the same point, we should have looked to prevent these things knowing what happened last year and the year before."

Walsh said she and her son's future in Quesnel is uncertain.

"I don’t know if I want to stay in B.C. much longer. It’s a little disturbing."

She lamented the lack of information coming from government officials about what residents can expect during future wildfire seasons.

"Will we always have these problems? It leaves you panicked."

What's the problem? A little

What's the problem? A little smoke and discomfort--well, okay, and maybe a bit of chronic health deterioration, maybe a death here or there? But, are the profits still flowing for pipelines and tar sands extraction and LNG fracking? Let's keep our eye on the ball here! We need more pipelines and fracking and LNG processing to finance a green future for the survivors, right? Oh sure, we may have to delay that green future for a while as our tax-dollar spending on healthcare and firefighting and post-fire rebuilding etc. goes into subsidizing the these costs, which some may say should come out of the profits. But hey, don't we want the jobs and tax revenues that the fossil fuel industry will bring--even if they are small fractions of what corporate hucksters....er,....I mean, what politicians claim they will be?

Trudeau's GHG emissions reduction target is going up in smoke. According to Natural Resources Canada, in 2015, total net emissions (emissions minus removals) of carbon dioxide equivalent (CO2 e) from Canada's managed forest (65% of Canada's total forest area) were about 221 million tonnes (Mt). That same year, Canada's total GHG emissions reached 722 Mt.
As a party to the United Nations Framework Convention on Climate Change (UNFCCC). Canada must report annually on greenhouse gas emissions from the managed forest. As Canada's forests have become a major source of GHG emissions instead of a sink, Canada has decided ( since 2012) not to include those emissions in its annual report on GHG emissions.
(source: National Resources Canada, July 28, 2017, Indicator: " Forest carbon emissions and removals")

Adding a medical analogy to

Adding a medical analogy to access existing cognitive frame in the public. I am starting to comment , over and over how both journalistic coverage and government action focuses on adaptation and or treatment of the symptoms but not addressing natural history and prognosis of the disease as well as preparing the "patient" for necessary treatment including lifestyle changes. The inevitable outcome is extinction. There is no greater public health threat.