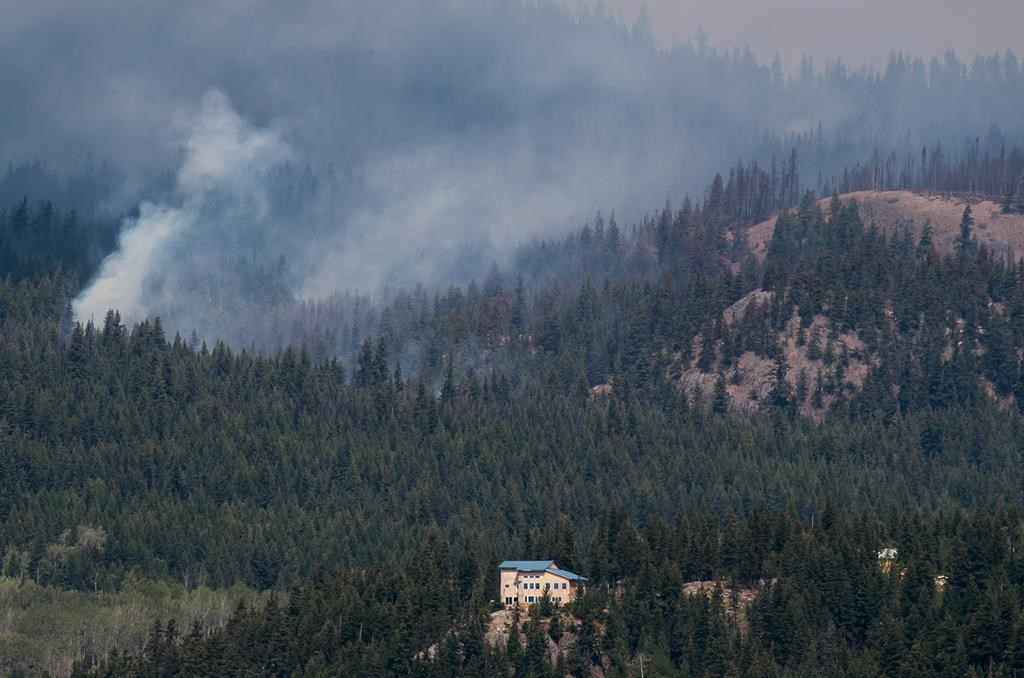 The Shovel Lake wildfire burns on a mountain behind a home near Fort Fraser, B.C., on Thursday, August 23, 2018. File photo by The Canadian Press/Darryl Dyck
Previous story
Next story

A year after the single worst season for wildfires in British Columbia's history, government statistics indicate the 2018 wildfire season has already reached the second-worst mark, burning more than 9,450 square kilometres of land so far.

That should prompt a longer look and more research into the trend, which saw more than 21,000 square kilometres of land burned over the past two years, said the province's chief fire information officer.

Speaking from the Provincial Wildfire Coordination Centre in Kamloops, B.C., Skrepnek explained how the two seasons have been very different so far.

He said in 2017, the most troublesome fires all started in a three-day period in early July, burning for months and merging with other fires. While fires merging is a common phenomenon, he said the sheer volume of blazes ignited in those three days created weeks-long battles for firefighters.

"We had hundreds of fires start in that period. And the major incidents that turned into the massive fires — the 100,000-hectare-plus fires that basically burned until the fall — were in that period," said Skrepnek.

In contrast, 2018 has seen almost 600 more fires than 2017, said Skrepnek, but most were more manageable due to a wet spring.

"We had a wetter June this year which has definitely, definitely been a saving grace for us," he said, adding the rainfall in June that prompted flooding across much of the southern part of province provided firefighters a head start.

The BC Wildfire Service says last year saw more than 12,000 square kilometres burned and roughly 65,000 people displaced or evacuated from their homes.

Skrepnek said more structures were destroyed last year — more than 300 — than so far in 2018. The number this year is roughly 140, although Skrepnek confirmed more than half were outbuildings and not necessarily residences or homes.

"It's looking like in the neighbourhood of over 50 homes destroyed," said Skrepnek.

Susan Williams of Emergency Management BC said it's too early to tell just how many people have been displaced from their homes, but said that between May 24 and Aug. 26, 5,396 people have registered for emergency social services.

"Not everybody registers, and this includes people who evacuated even if they were under alert, so it takes a while to figure out the other numbers," said Williams from the agency's headquarters near Victoria.

Data shows the province spent more than $568 million in firefighting efforts, and while the figures for 2018 are still coming together, Skrepnek estimates they will spend more than $300 million suppressing wildfires.

"We'll definitely be one of the most expensive on record this year," said Skrepnek.

Skrepnek said they have approximately 4,500 people currently working under the BC Wildfire Service province-wide, and that his organization would be looking at multiple ways to increase resources.

He said firefighters contracted from forestry and firefighting companies are always a large part of provincial fire suppression efforts, but this year they added a first-ever pool of roughly 80 "Type 2" firefighters working directly for the BC Wildfire Service.

"These are contract firefighters, but we train them, and they have to meet a higher fitness standard than other contractors," Skrepnek said.

The BC Wildfire Service says the Northwest Fire Centre based out of Smithers, B.C., has borne the brunt of the this season, seeing fires that have burned roughly 5,400 square kilometres.

— By Spencer Harwood in Vancouver