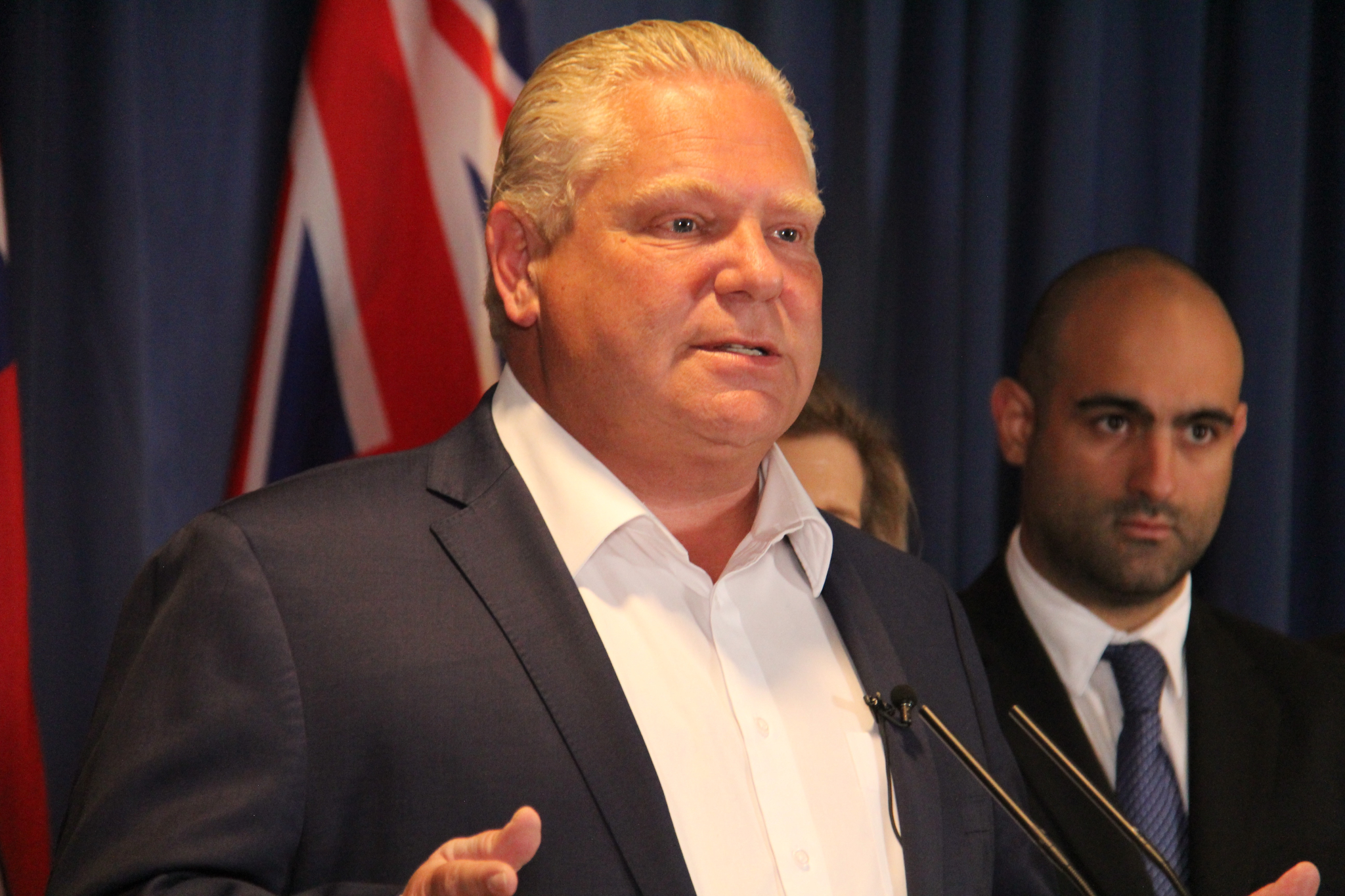 Doug Ford appears at a press conference in Toronto on July 5, 2018. Photo by Steph Wechsler
Previous story
Next story

Ontario Premier Doug Ford is musing about breaking a key campaign promise geared at the province's cottage country in the last election.

Speaking to reporters at a news conference in Milton, Ont., about 40 kilometres west of Toronto, Ford acknowledged that he had promised to cancel a controversial hydroelectric dam at the site of the Bala waterfalls in the Muskoka region.

"It’s frustrating to say the least," he said. "What Kathleen Wynne did on that deal up there...I went there personally...I had endless consultation with a group from Bala and their primary focus was on the Muskoka watershed."

The Parry Sound-Muskoka riding has been staunchly Conservative for years and is represented by Tory MPP Norm Miller. The veteran MPP has represented the area at Queen's Park since the departure of the last PC premier Ernie Eves in 2001. Miller was re-elected in the 2018 election by a larger margin of victory than what he had in the 2014 vote, and local groups celebrated that the incoming government would deliver on a promise to scrap the project.

"I wish we could cancel it," Ford said in Milton.

Following up on the promise, the premier said his government is offering $5 million in new spending to protect the Muskoka watershed, but wants to avoid paying up to $100 million to cancel the project underway by Swift River Energy Ltd. The government announced this additional $5 million in funding last week.

"So I think we’re coming to the table and if we were to cancel it, it could range anywhere from $20 million to $100 million but their number one concern after consultation with the people up at Bala was the watershed," Ford said. "So we’re going to invest with the community, by the way with consultation from the community to make sure we have a good watershed up at Muskoka."

Ford doesn't say whether he was aware of costs

When asked whether he knew there would be costs to his promise, Ford declined to say.

"As the election went on, what I understand, they were working overtime 24/7 to move it forward even quicker than what we thought, and again, I consulted with the residents we put a small group together," he said. "The problem is, (if) you leave a big hole in the ground, it would cost the taxpayers an absolute fortune. This is a massive mistake for the Liberals to even have this.

"And by the way, they did it with zero consultation up at Bala. At least we’re consulting with the people. We’re stepping up to the table here and we're going to give them $5 million. And with conjunction with the local community matching that amount, hopefully.”

But Save the Bala Falls, an incorporated community group that facilitates communication between the various stakeholders, government and the developer says that isn't quite the case.

According to the group's press release, their efforts to meet with Ford's office and share solutions, including "opportunities to cancel this project without incurring any legal liability," were ignored.

"So no, that is an incorrect exaggeration on his part to claim that he's consulted with us," said Mitchell Shnier, a group volunteer and spokesperson.

"We have ways that the Ontario government can get out of this contract without this threat of being sued and in fact they could save money," Shnier told National Observer in a telephone interview. "The Doug Ford government has been making a lot of promises and they need income. And firing the six-million-dollar-man at Hydro One, that's not where the real costs are. The real costs are paying too much for electricity generation and this is what we have answers on and this is why we want to meet with the government."

Since the Progressive Conservative government was sworn in on June 29, it has undone a spate of renewable energy programs, including the cancellation of 758 clean energy projects. During the summer sitting of the legislature, the house also passed an omnibus bill that targeted the White Pines Wind Project in Milford, Ont. for shutdown, a controversial site that already had four of nine planned wind turbines erected.

Leading up to passage of Bill 2, it was estimated that cancelling the contract — held by German wind developer wpd — would cost taxpayers $100 million.

Much of the new government's energy legislation — such as the bills to undo cap and trade and White Pines — include provisions to shield the province from liability for scrapped deals. While Ontario companies may find it challenging to sue the government, it isn't yet clear whether all of the foreign-owned companies involved can win their cases in court.

One of these companies scored a victory on Tuesday. The Canadian arm of Tesla defeated Ontario in court over the loss of green energy rebates. Judge Frederick L. Myers agreed that preventing Tesla from benefiting from a grace period was unreasonable, and precluded the company from "any fair process whatsoever."

Ford and Energy Minister Greg Rickford touted some silver lining in their moves, saying that their "wind-down" of Ontario’s carbon pricing policies will net households $80 on their natural gas bills.

The Ontario Energy Board has been instructed to factor out “the cost of the carbon tax," the premier and Rickford announced from a diner in Milton.

“Removing the carbon tax from natural gas bills will provide real relief for Ontario’s lower and middle class families,” said Rickford in the town, about 40 kilometres west of downtown Toronto.

The Progressive Conservative government's new policies do not mention anything about the cost of failing to take action on climate change and canceling new business opportunities in clean growth.

While a climate action strategy has yet to be announced from the Ontario government before or since the province’s exit from the cap and trade market, Ford doubled down on his commitment to challenge any federally imposed carbon tax.

Both Ford and Saskatchewan Premier Scott Moe have stated they’ll fight a cost on carbon levied by Ottawa in court.

When asked by a reporter about the perception that his government isn’t taking action on climate change, Ford called the notion of carbon taxes “a scam,” one that Ontario’s Progressive Conservative government will push back on with “every tool at its disposal.”

“The carbon tax is the worst tax ever, anywhere,” said Ford. “It has nothing to do with protecting the environment. It is just one more way for the government to line its pockets and gauge the people of Ontario.

The government has also introduced legislation that proposes to require the environment minister to introduce new climate policies and targets, and then to report back on progress. But the legislation has not yet been adopted.

The changes to natural gas pricing will take effect Oct. 1.

By Steph Wechsler | News, Politics | August 15th 2018
Reports from the Race to a Safer World

A wonderfully detailed look at the mindset of a populist government, dedicated to the rejection of even elementary schoolroom atmospheric science.

One can only wonder what a discussion would sound like at the dinner tables of cabinet members where intermediate elementary school lessons of the day had touched on the greenhouse effect being caused by carbon emissions and the measureable warming of air, land and water. Ontario students can bring textbooks to the table, where "serious" discussion is allowed to broach etiquette to that degree, challenging the more those family members whose science studies in the natural world was heavily dependent on studying the processes at work , with sunlight shining on those schoolroom geraniums.

An informative look at the

An informative look at the conservative politicians and their NIMBY supporters whose concern for the natural world is that of the self absorbed individual whose property and tourism appeal may be affected by an environmentally responsible project. The legacy of their children is clearly not important for people whose sensibility for the enjoyment of "unspoiled" nature is warped by an inability to accept evidence-based science - even the evidence of their senses in a summer of violent climate change, worldwide.

An informative look at the

An informative look at the conservative politicians and their NIMBY supporters whose concern for the natural world is that of the self absorbed individual whose property and tourism appeal may be affected by an environmentally responsible project. The legacy of their children is clearly not important for people whose sensibility for the enjoyment of "unspoiled" nature is warped by an inability to accept evidence-based science - even the evidence of their senses in a summer of violent climate change, worldwide.