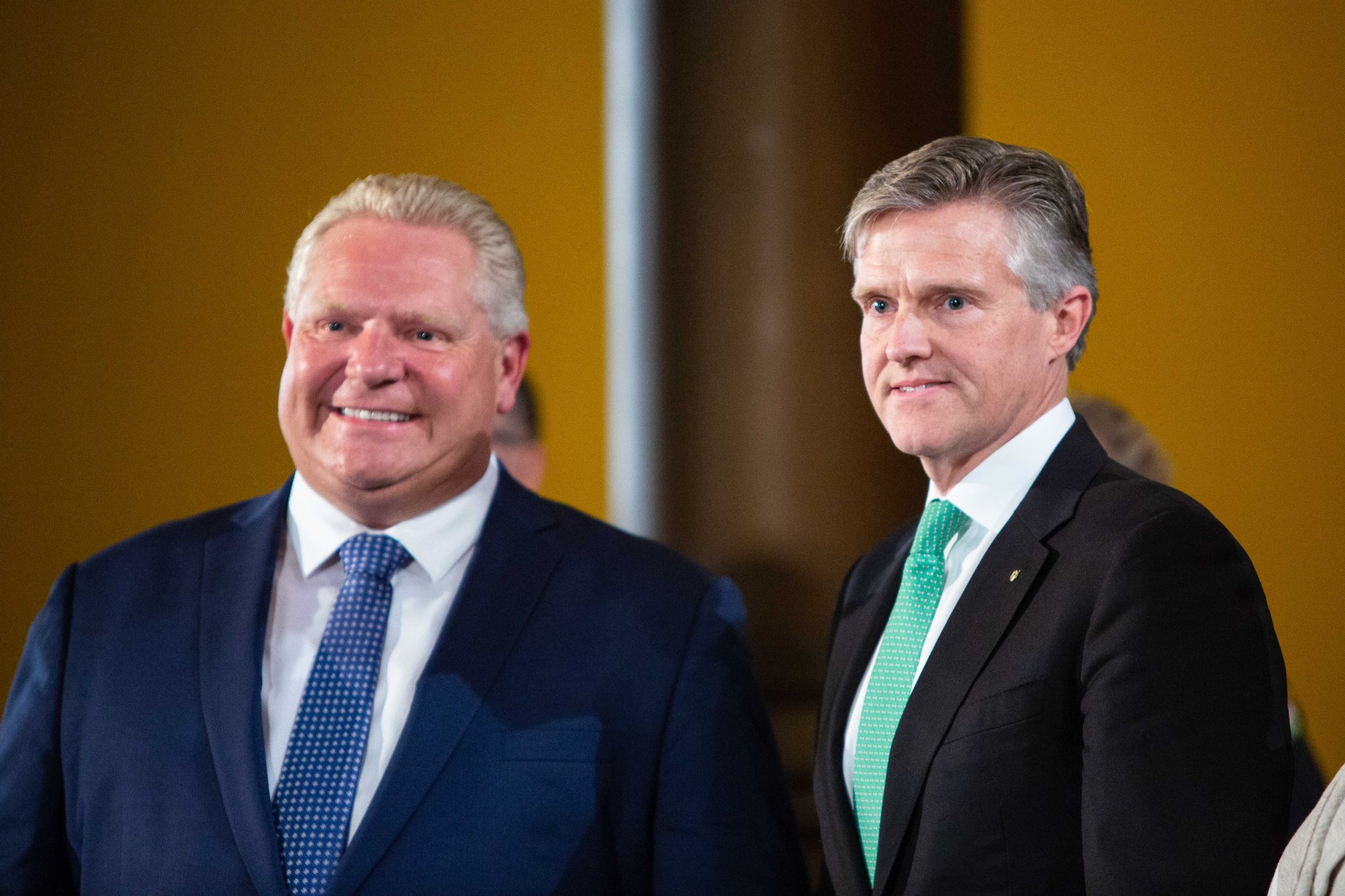 Minister of the Environment, Conservation and Parks Rod Phillips at his swearing in ceremony at Queen's Park, Toronto, on June 28th 2018. Photo by Alex Tétreault
Previous story
Next story

The Ontario legislature has adjourned for the summer without adopting the Ford government's bill to formally shut down the province's carbon trading market.

Instead, MPPs at Queen's Park barreled through passing the highly controversial Bill 5 – or Better Local Government Act – a law that was introduced for the first time without warning less than three weeks ago that would reduce the size of Toronto’s city council from 47 to 25 representatives.

The Cap and Trade Cancellation Act (or Bill 4), announced by Minister of Environment, Conservation and Parks Rod Phillips on July 25, includes provisions that would require him to outline new emissions targets, without legally requiring the province to adhere to them.

“‎Bill 4 is a priority for the government and will come up for debate when the legislature resumes in the fall,” said a spokesperson for Government and Consumer Services Minister Todd Smith, in an email to National Observer. Smith is responsible for Premier Doug Ford's legislative agenda as his house leader at Queen's Park.

Until the Ontario government switched gears to get its council bill through the legislature, it had previously focussed efforts on policies that would upend the province’s existing climate and environment regulations.

With the passage of the Better Local Government Act, our legislative session has ended for the Summer. In less than two months, our government has already delivered on many key promises, while making significant progress on others. #onpoli

Among Ford’s first announcements after being sworn in on June 29 was the "orderly wind-down" of cap and trade and any programs paid for by the revenue it generated. This started with a decision to cancel a regulation on July 3 that was needed to allow cap and trade to proceed.

Cap and trade is a market-based system that requires companies to keep pollution levels below a cap through in-house reductions of their emissions or through the purchase of allowances from other companies that have exceeded their targets. The system, initially linking businesses in California, Quebec and Ontario, was designed to create market incentives that reward greener companies, while compelling other companies to innovate and reduce their environmental footprint.

On July 25, The Progressive Conservative government introduced Bill 4 to formally repeal the Climate Change Mitigation and Low-carbon Economy Act, which was implemented by the government of former premier Kathleen Wynne in 2016.

"I can tell you that our government is looking forward to moving past the previous Liberal government's propensity to just raise taxes and instead focusing on an environmental plan that works," Phillips told reporters at a press conference held to introduce the new legislation.

Although the government hasn't yet adopted Bill 4, it adopted a separate piece of legislation called Bill 2 or the Urgent Priorities Act. This was tabled by Energy Minister Greg Rickford, to implement a series of decisions, including the cancellation of a major wind energy contract, the White Pines Wind Project, some changes to the management of Hydro One, as well as back-to-work orders to end a labour conflict at York University.

The Ford government took all these steps despite warnings from Ottawa.

Prime Minister Justin Trudeau said in June that the federal government has plans to intervene and impose a carbon tax on provinces without policies to help them meet emissions targets set out by the national climate framework.

Environment Minister Catherine McKenna also said the federal government would review up to $420 million in transfer payments to Ontario for green energy projects since the province was no longer participating in a pan-Canadian framework agreement to take action on climate change.

Ontario and Saskatchewan’s premiers have vowed to challenge a Trudeau carbon tax in court. Ontario itself has committed millions of taxpayer dollars to pursue this fight even though legal experts say it is unlikely to succeed.

After adjourning on Tuesday, the Ontario legislature will return for its fall sitting on Sept. 24.

'I certainly find myself unable to comprehend it'

Back at Queen's Park in Ontario, it is unclear why a government that staked its early weeks on cancelling climate change policies would decide to hold off on legislation that would formally fulfill its most touted campaign promise.

But experts have said that several provisions in the bill will cost the province dearly – up to the billions – and others don’t believe that the province will reduce emissions without being legally required to do so.

“I think it's clear that for emissions targets to be taken seriously they have to be set by law; otherwise, if it isn’t convenient to meet a target, the government just changes it,” Dianne Saxe, the environmental commissioner of Ontario, told National Observer. “Many times, governments like to announce targets with great fanfare. They get their picture taken and then if they’re not on track to meet them, they just change them.”

As the steward of Ontario’s Environmental Bill of Rights, said Saxe, the province would not be upholding the law if Bill 4 goes through.

“I recognize that the government believes they have a mandate to repeal cap and trade because of the election, although the Environmental Bill of Rights does not accept that as an excuse for failing to comply,” she said. “But it is extremely clear that there was no consultation of any kind as to what Ontario’s climate policy should be going forward before Bill 4 was introduced or (until) today.”

The commissioner said that she believes there are multiple legal grounds on which the province could face legal action, despite the bill’s provisions designed to protect it from liability.

If he were to speculate, Professor Amir Attaran at the Ecojustice Environmental Law Clinic at the University of Ottawa, says that Ford’s cabinet has likely been advised to slow down with its carbon policy repeal.

“The theory I have, but it’s only a theory,” he said, “I think they introduced this bill and later were told what legal liabilities they’re facing and they probably are now engaging in some sober second thought, to the extent you can with Mr. Buck-a-Beer Premier.

In its outline, the province set aside $5 million to reimburse allowance holders. Attaran says that should be multiplied by 100.

The credits, he explains, are paper assets, like those traded in stock markets, entailing the expectation that the credits will not be rendered worthless by government.

Phillips, the environment minister, didn't respond to questions from National Observer about the status of Bill 4.

“I certainly find myself unable to comprehend it,” said Attaran of Ford’s approach to climate policy. “But the larger issue here really is that they’ve in a very short amount of time taken Ontario from being a highly advanced jurisdiction for greenhouse gas regulation into a knuckle dragger. And that's deplorable.”

"Ford’s approach to climate policy... taken Ontario from being a highly advanced jurisdiction for greenhouse gas regulation into a knuckle dragger"